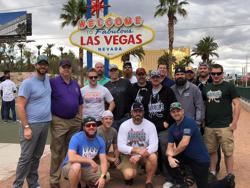 The Minnesota Warriors participated in the 2018 USA Hockey Warrior Classic, presented by Terry Fator, in Las Vegas, NV this past weekend. Taking place for only the third time, the event is one of USA Hockey’s newest disabled hockey events and is designed to bring together teams from across the country competing in one of USA Hockey's fastest growing disabled hockey disciplines, Warrior Hockey.

Tournament play opened with six games on Friday, followed by four playoff games on Saturday and three games - including the two championship games - on Sunday.

The Minnesota Warriors had a strong first day at the event, going 2-0 on Friday while scoring 15 goals and allowing only three. A slow start on Saturday cost the team a chance to win the tournament title though. The Minnesota squad gave up the first two goals and fell behind 5-1 to the upper level Dallas Warriors in their playoff game. The team rallied in the third period, scoring three goals in a span of three minutes, but they eventually fell short as Dallas moved onto the title game with a 5-4 win.

Despite falling short of the championship game, Minnesota Warrior board member Jon Albert described the event as an amazing experience.

“We were able to play at the Golden Knights practice facility, and they were an amazing host along with Terry Fator and the Mirage hotel,” said Albert. “It is always a good time to build relationships with other Warrior programs from around the country at these tournaments. I have meet so many great people over the past few years when I have been able to attend, and I look forward to it every time.”

This was the second time the Minnesota Warriors participated in the USA Hockey Warrior Classic. The last time they participated was during the inaugural event in Arlington, VA in 2016. The event nearly doubled the number of teams in the two-year span.

USA Hockey’s Warrior Hockey Discipline is dedicated to injured and disabled US Military Veterans who have served our country and play the sport of ice hockey. As one of the Disabled Hockey Section's newest disciplines, the Warrior Hockey Discipline is growing across the country.  While some of the participants played hockey prior to being injured, many try it for the first time for therapeutic reasons.

“The experience is always amazing traveling with the Warriors,” said Albert. “You tend to miss the time spent with your buddies in the military. and these tournaments help bring that relationship back into all of our lives.”