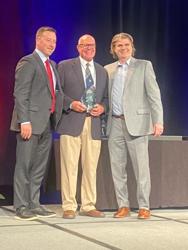 At its 2022 Annual Congress in Denver, Colorado, USA Hockey honored its service award recipients, players of the year, and other top award recipients including three Minnesotans.

Pat Westrum (Apple Valley, Minn.) was honored with the Walter Yaciuk Award, presented annually by USA Hockey “to an individual who has made an outstanding contribution to the organization's coaching education program during many years of service as a volunteer.” The award is named for the late Yaciuk, USA Hockey's first coach-in-chief.

Currently the district coach-in-chief for Minnesota District 6, Westrum has served the USA Hockey Coaching Education Program since 1995. Additionally, he has been involved as a coach and evaluator with Minnesota Hockey and USA Hockey player development camps for over 25 years and has been instrumental in the development of programs, athletes and coaches, not only in the Twin Cities, but throughout the state. 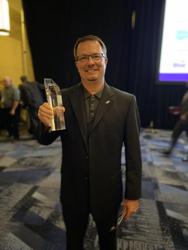 Pete Carlson (Blaine, Minn.) was recognized with the John Beadle Adult Member of the Year Award. The award is presented to someone who makes tireless contributions to the hockey community as an adult player or volunteer. In 2020, it was renamed in honor of John Beadle, who served as vice president of USA Hockey and chair of the organization’s Adult Council for 27 years.

Carlson currently serves as the senior director of ice arena operations and programs for the National Sports Center Super Rink in Blaine, Minnesota. For the past 15 years, Carlson has served as a member of the USA Hockey Adult Council. He is an active volunteer in the hockey community, helping to onboard new leagues, run adult tournaments and adult skills clinics, and assist at many other events, including the Labatt Blue/USA Hockey Pond Hockey National Championships each season. 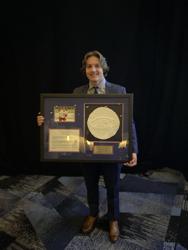 Connor Kurth (Elk River, Minn.) was celebrated as the 2022 Dave Tyler Junior Player of the Year recipient, as the most outstanding American-born player in junior hockey.

The Dubuque Fighting Saints forward finished fifth in the USHL regular-season with 81 points in 62 games, while his 35 goals were tied for fifth in the league. Kurth recorded an impressive 25 multi-point games in 62 regular season contests in his second season with Dubuque.