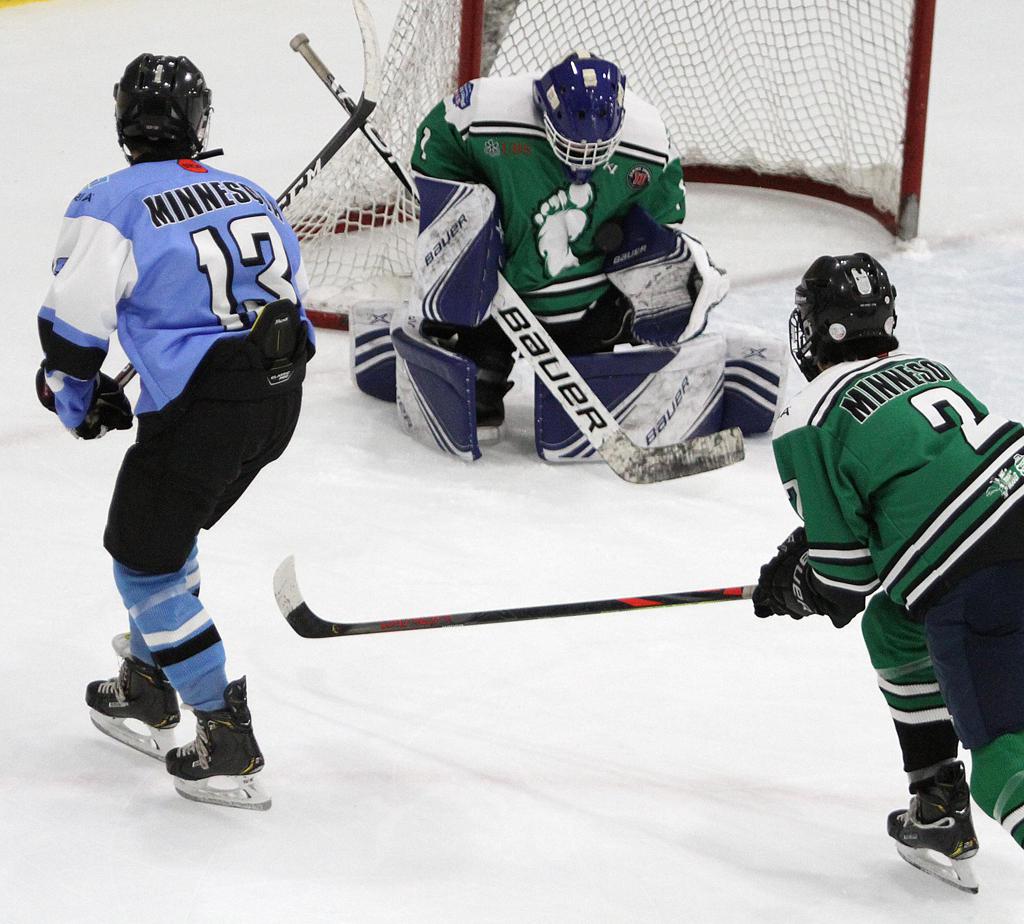 PLYMOUTH -- The first two weekends have seen a string of impressive performances turned in by the Green Giants, who start the Youth 14 Tier I season a 6-0 record and a pair of shutout victories at Plymouth Ice Center. On Sunday, the green machine capped it off at the Super Rink with a 4-1 win over Sioux Falls Power 14U.

Things are working for the Giants, who represent District 10 from the north suburban area. Green have been averaging over 6 goals-per-game, while allowing less than two. Puck movement has been good, the team speed has been able to feed the offense on transition, and goaltending has been superb for the Y14 Tier I’s most consistent team.

Brett Solomon, a forward from Champlin, has recorded a point in all six games, and enters the September part of the schedule with five goals and 10 points to lead the team, along with Benjamin Doll from Andover (5-5-10), and Calvin Noha from Lino Lakes (6-2-8).

In net, Wyatt Knott (Rogers) and Otto Reinhart (Cambridge) are second and third respectively in league leaders of save percentage behind the Walleye's  Josh Middleton's  league-best .933. Better than 10 points ahead of Knott (.921) and Reinhart (.915).

The Loons (3-2-0) from the east metro have produced steadily on the offensive end, with Gavin Katz (Dellwood) and Malachi McKinnon (Falcon Heights) sitting as the league’s first and second leading scorer. Katz tops everyone with 16 points (5-11-16), and McKinnon is the league’s top goal-scorer with eight goals and 13 points. Elijah Bailey (Afton) rounds out in the top five with four goals and nine points.

Finishing the weekend with an impressive 9-1 win over the Voyageurs (District 11/12 - North) that puts their record at 3-2, the Loons have tallied 31 goals in five games, which gives them a per-game average of 6.20, nearly as strong as the Giant’s 6.33.

The Lakers ended the weekend unbeaten as well, holding a 3-0-1 mark with four games in three busy days. The grey-and-blue jerseys from District 2, representing the southwest metro composed of many programs that feed the Lake Conference, picked up a pair of wins over the Voyageurs and Sioux Falls with a combined 17 goals Saturday.

The Tier I schedule moves next to Moorhead (Sept. 11-13) for a full set of games.