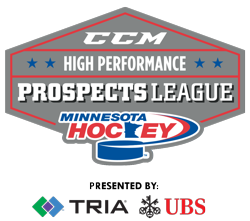 The Minnesota Hockey CCM High Performance Youth 14U Prospects League is designed to give hockey players born in 2008 & 2009 the opportunity to train and compete against players of similar age and ability. The Prospects League is built in conjunction with our HP Tier I League.

The Prospects League is focused on preparing players for their upcoming association season and future CCM High Performance through an emphasis on player development. Players will train and play games throughout August and September, including a league playoff with the chance of playing for a District Playoff and potential USA Hockey National Championship advancement.