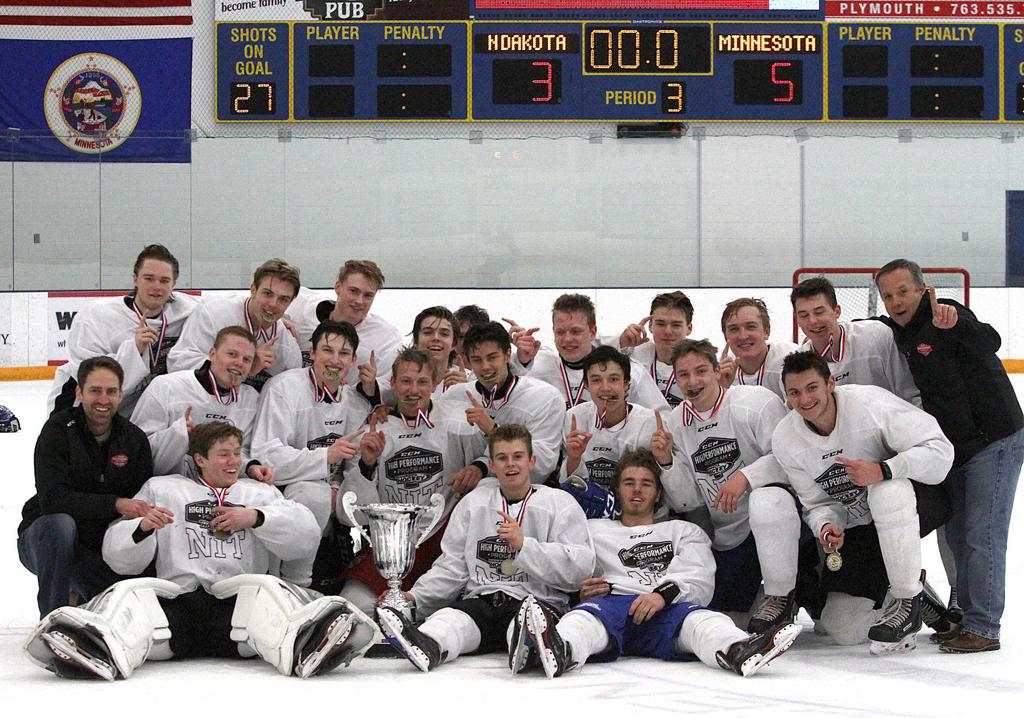 The Minnesota HP18 team poses with its trophy after their 5-3 win over North Dakota in Sunday's NIT Championship game. Photo by Drew Herron

The Minnesota Juniors scored twice in the third period to pull away from North Dakota and cap off a perfect tournament run with a 5-3 victory in Sunday’s National Invitational Tournament at Plymouth Ice Center.

Frederick Paine (Duluth East) buried a shot from the right circle on a feed from Kyler Kleven (Moorhead) with 1:56 remaining that proved decisive, and the White team made of juniors from Minnesota would add an empty netter to finish off a determined North Dakota team.

“This is a great group of kids that bought in and supported each other,” co-coach Mike Taylor (Eagan) says. “Our guys really played as a team…we were unselfish with the puck and everybody did their job.”

North Dakota struck first, just 29 seconds in on a goal by Dane Montgomery (Grand Forks Red River), and Green would play tied or with the lead for much the remaining time outside of the final two minutes.

The teams would trade goals as Zach Brydges (Cretin-Derham Hall) tied the game for the first time at 8:26, and three minutes later, Minnesota would go ahead on a Darian Gotz (Hermantown) power play goal with 6:31 remaining as both sides dug in.

In the second, North Dakota struck early and late in the period on scores from Cade Stibbe (Fargo Davies) and Carter Bailey (Bismarck Century), with a goal from Minnesota’s Isaac Henkemeyer Howe (Moorhead) in between.

Intensity was high in the third as both sides created chances, and shots totals were running at a similar pace (final shots favored Minnesota 30-27).

Paine’s goal extinguished the North Dakota threat, as Green could not rally and tie things late as they had for the previous two nights.

Paine finished with two points in the game, and six for the tournament. Kleven had three assists in the title game, and finished with seven points (3-4-7) for the weekend, tied for most with teammate Tim Piechowski (Eden Prairie).

Their efforts all fit into what turned out to be an elite group of juniors for Minnesota.

“It’s not just the talent, but the compete-level that each one of these guys bring,” Taylor says. “I think the guys are proud to do it for themselves, and to represent Minnesota.” 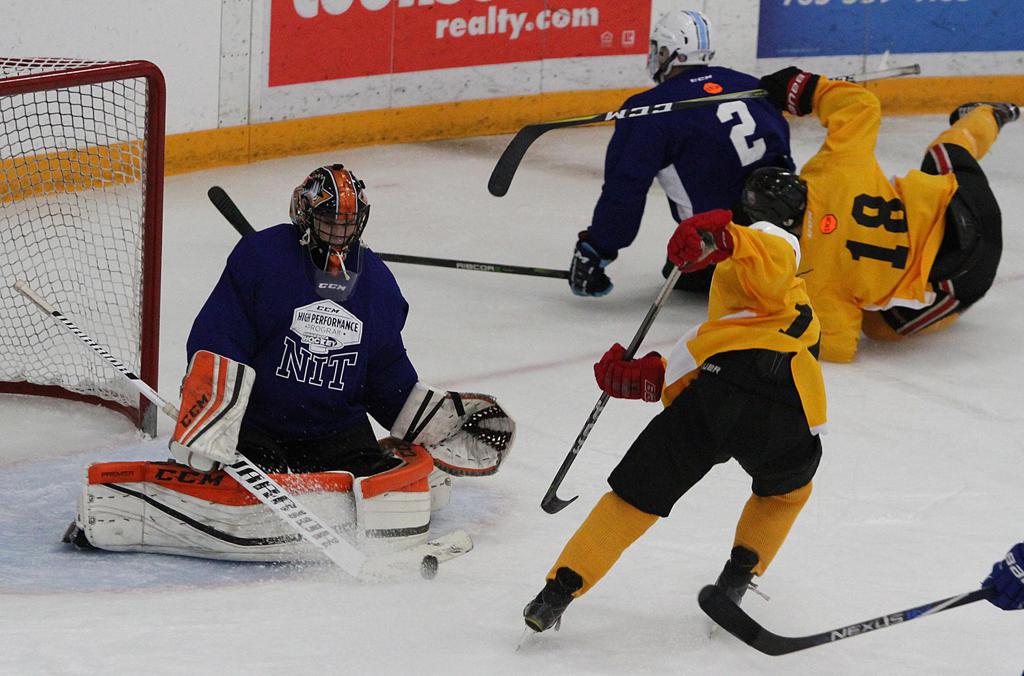 The Minnesota Seniors battled back from a two-goal deficit and scored four unanswered to roll past the Michigan Seniors 4-2 in Sunday’s third place game at Plymouth Ice Center.

It proved to be a successful finish for Minnesota as the Gold closed out the tournament with three straight wins after dropping the opener to North Dakota.

Michigan would strike first, scoring the first periods only goal with 3:13 left when Dawson McKay (Houghton) converted for the Blue. Michigan added another early in the second period when Brad Baysore (Grand Rapids Christian) buried a shot to push Blue ahead 2-0.

From there, Minnesota would go to work. Matt Koethe (Minnetonka) got the Gold on the board with an unassisted goal a minute later, and Minnesota got two late period goals from Aaron Myers (Thief River Falls) and Kasyn Kruse (Luverne) to push the team ahead.

Koethe would finish near the top of the stat board with five points (3-2-5), and the team’s top defensive pair, Andrew Hicks (Minnetonka) and Nick Strom (Breck) both chipped in four points apiece for the tournament.

In the third, Nathan Adrian (Roseau) would score the only goal of the period as Minnesota pulled away. The Gold outshot Michigan 38-26 for the game.

Max Eilefson (Irondale) picked up the win in goal for Minnesota by stopping 24 of 26 shots.

His counterpart, Piece Cadieux (Brother Rice) stopped 34 of the 38 shots he faced between the pipes for Michigan. 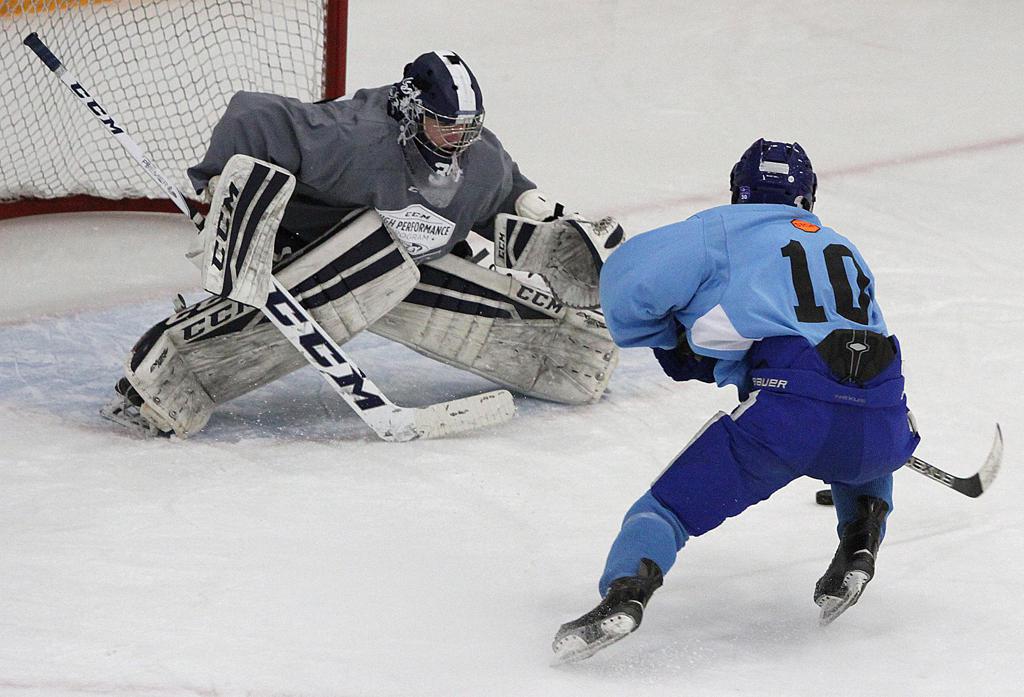 Loukus scored the team’s second and third goal, turning a nail biter tied at 1 into convincing victory for the Sky Blue squad. Loukus scored his second of the game with 11:39 to go, effectively putting Michigan on a victory footing.

Wisconsin answered a short time later when Sam Techel (Wausau West) scored at 7:53 of the third, but Michigan would keep a lid on things down the stretch, and added another pair of goals, including an empty-netter in the final minute.

Brett Tome (Hartland) earned the victory between the pipes for Michigan by stopping 28 of 30 shots.

At the other end, Garrett Larsen (Waukesha West) and Alex Cohen (Hudson) combined to man the crease and split the time down the middle. Larsen started the game and stopped 24 of 25 shots. Cohen played out the second half of the game and made 10 saves on 13 shots. 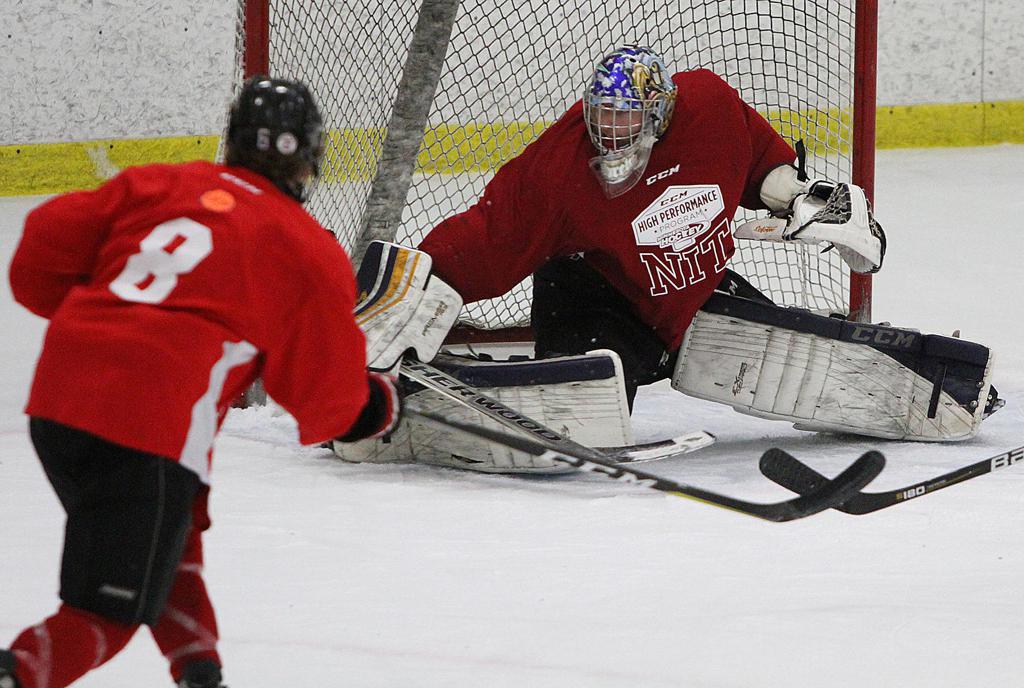 Wisconsin Seniors forward CJ Harkins scores the games first goal late in the first period when he fires a shot below the blocker of Massachusetts goalie Andrew Lorusso. Wisconsin prevailed with a 5-2 final score. Photo by Drew Herron

The Wisconsin Seniors closed out the seventh place game with a 5-2 victory over Massachusetts Sunday morning at Plymouth Ice Center.

CJ Harkins (Sun Prairie) and Jack Flattum (Hudson) both had a pair of goals to lead the charge as Red played with a lead much of the way after scoring in the final minute of the first period.

In net, Colin Ahren (Fond Du Lac Springs) manned the crease for three periods and turned away 31 of 33 shots to earn the victory.

Hawkins opened the scoring with 24 seconds remaining in the first period when he buried a low wrist shot that beat the goalie glove side, and Wisconsin opened things up in the second period when they scored thrice in a span of three minutes.

Ronan Bryant (Lexington) and Matt Irwan (Shawsheen Tech) both scored goals for Massachusetts, while the goaltending duties were split by period.

Andrew Lorusso (New Hampshire Avalanche) started and played the first period where he stopped 11 of 12 shots. In the second, Owen O’Brien (Marlboro) played the second period and allowed three goals on 13 shots, before Cameron Marcoux (Lincoln-Sudbury) closed out the third with 13 saves on 14 shots.