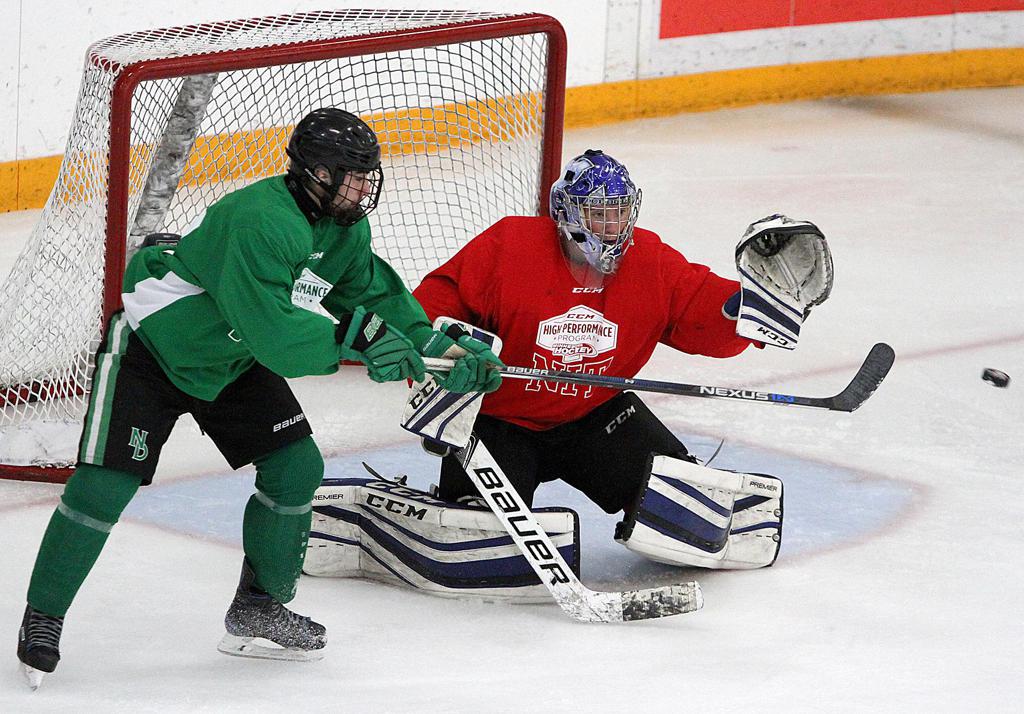 North Dakota rode another shootout victory, this time against a stubborn Wisconsin SRs squad, as the Green ran through pool play unbeaten to reach Sunday’s championship round.

The North Dakota Green outshot Wisconsin 37-17 for the game, but a late score by Red’s Zachary Wilson (Fond Du Lac) with less than two minutes remaining pushed for the shoot-out to decide things.

Having traded a goal apiece as the sides pushed through five attempts, Branson Holt (Grand Forks Central) snapped a quick forehand into the open space on the far glove hand side, followed by a save from Kaleb Johnson (Grand Forks Central) to drive the Green into a title match with the Minnesota HP18 squad of juniors.

Kirklan Irey (Bismarck Century) and Jay Buchholz (Fargo Davies) each scored in regulation for North Dakota, who held the better play for the majority of the time. A steady and aggressive forecheck slowed Wisconsin’s ability to pass and move the puck, and Green’s speed and puck possession left Red in difficult position too many times.

Wisconsin goalies Michael Jahnke (DC Everest) and Colin Ahern (Fond Du Lac Springs) combined to stop 35 of 37. Ahern was a perfect 13-of-13 during his half game of action.

Between the pipes for North Dakota, Johnson finished the game with 15 saves on 17 shots, plus four of five in the shootout. 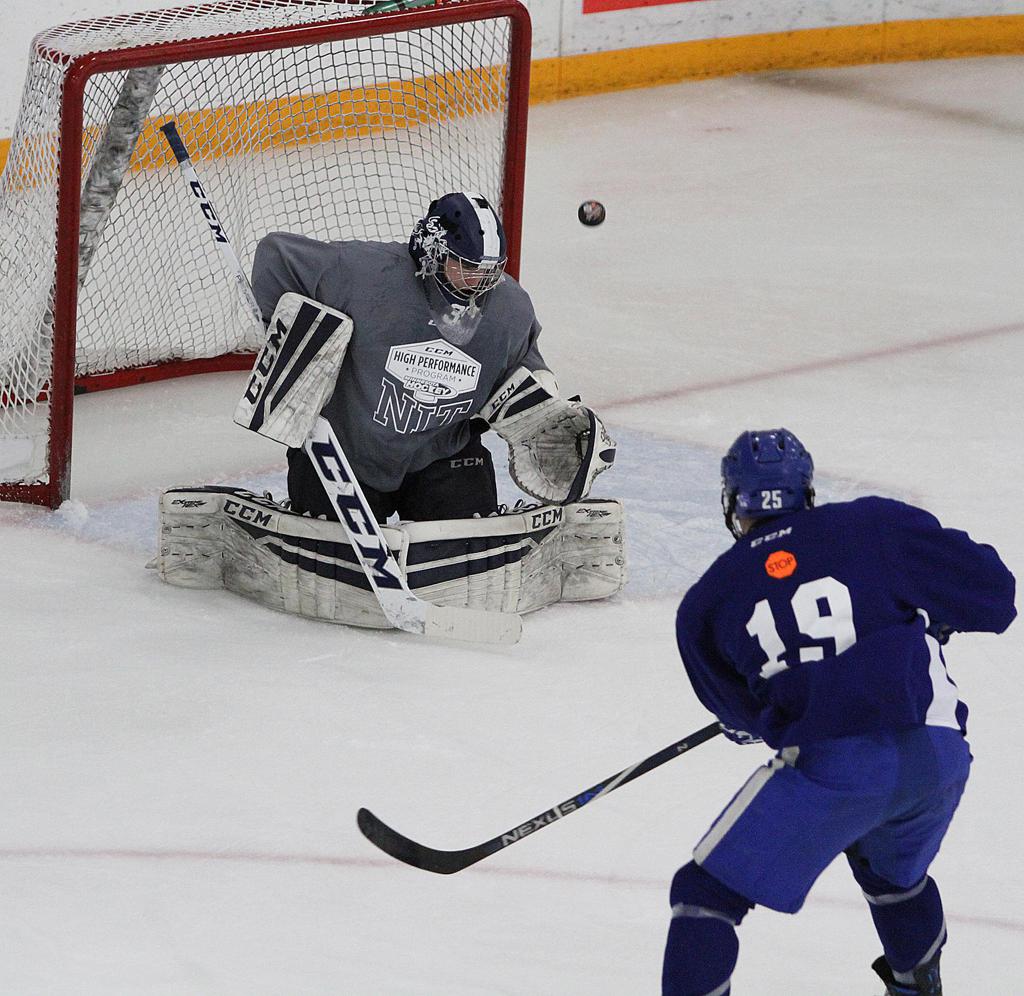 Ten different players found their way onto the scoresheet as the Michigan SRs skated past Wisconsin HP18s by a 5-3 final Saturday afternoon at Plymouth Ice Center.

Scoreless after the first period, Blue broke loose with three goals in the second and played with the lead much of the way.

Michigan’s goals came from five different sources, while Jordan Kovacs (DeLaSalle) was the only player from either side to collect more than one point. Kovacs assisted on Blue’s first two goals.

The win puts the Michigan seniors’ record at 2-1, good enough for second place in Pool B behind unbeaten Minnesota HP18.

Merritt Hoogverraad (Grand Rapids CC) played the entire game between the pipes for Michigan, and stopped 22 of 25 shots to carve out the victory.

At the other end, Wisconsin split goalie duties, with Alex Cohen (Hudson) stopping all nine shots he faced in the first period before yielding to Garrett Larsen. Larsen stopped 16 of 20 shots over the final two periods. 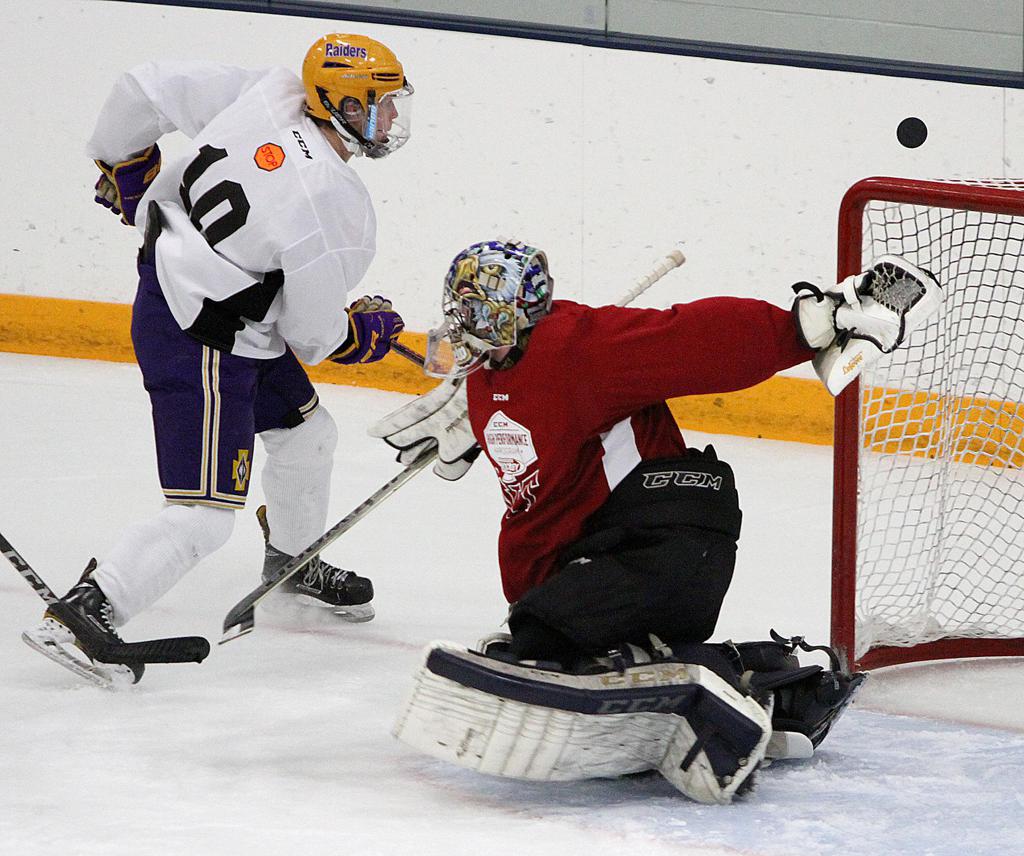 Minnesota HP18 turned it on in the third period Saturday afternoon at Plymouth Ice Center to ease past Massachusetts via 8-1 final.

The White squad outshot the opposition 65-16 for the game, though Minnesota led by just a pair of goals after two periods before finishing the third on a tear.

Derek Roberts (Champlin Park) finished with a hat trick after scoring the game’s final goal with 1:11 left, and Frederick Paine (Duluth East) added a goal and two assists for White. Nick Dainty (Andover) and Kyler Kleven each added a goal and an assist as well.

The win clinches first place in Pool B for the Minnesota juniors, who head into Sunday with a perfect 3-0 mark and a spot in the title game.

Massachusetts’ goalie Andrew Lorusso stopped all 26 shots he faced in the second period to keep the Maroon team within reach before Minnesota learned to finish more effectively in the third.

Third-period woes continue for Massachusetts as the six goals allowed Saturday pushes their sum to 17 in the final period through the first three games, compared to eight goals surrendered in the first two periods from all three games combined.

Massachusetts’ lone goal came early in the third period when Jacob Mauro (Lunenburg AS) broke the shutout with a close-range wrist shot that hit.

In net for Minnesota, Collin Dorzinski (New Prague) went the distance and stopped 15 of the 16 shots he faced. 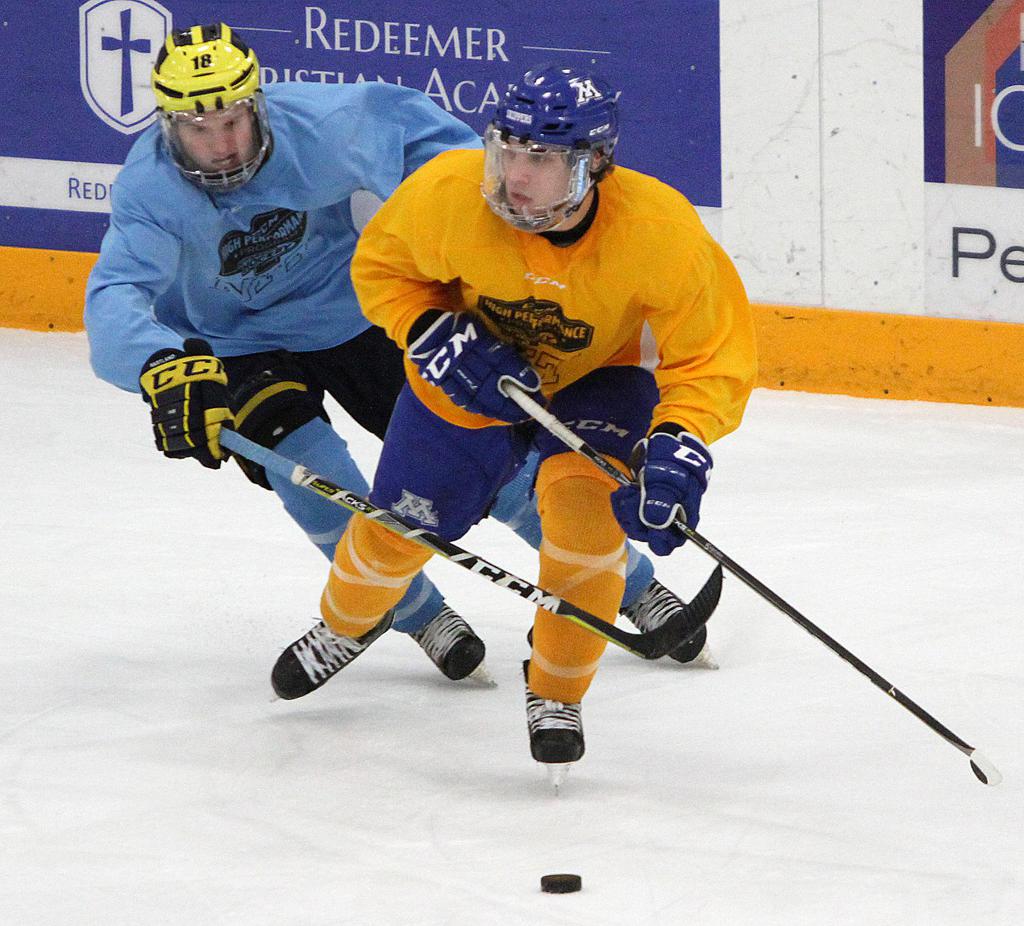 The Golds converted a power play goal by Matt Gellerman (South St. Paul) six-and-a-half minutes into the first period, and Minnesota was in command the rest of the way.

Minnesota’s goalies split time in the crease to combine for the shutout. Jackson Hjelle (Delano) stopped 12 shots, while Max Eilefson (Irondale) played latter period and a half and stopped nine shots.

Minnesota improves to 2-1 for the tournament, while Michigan drops its mark to 1-2.

Sam Evola (Detroit Country Day) was between the pipes fall three periods for Michigan. Evola made 36 saves on 41 shots.