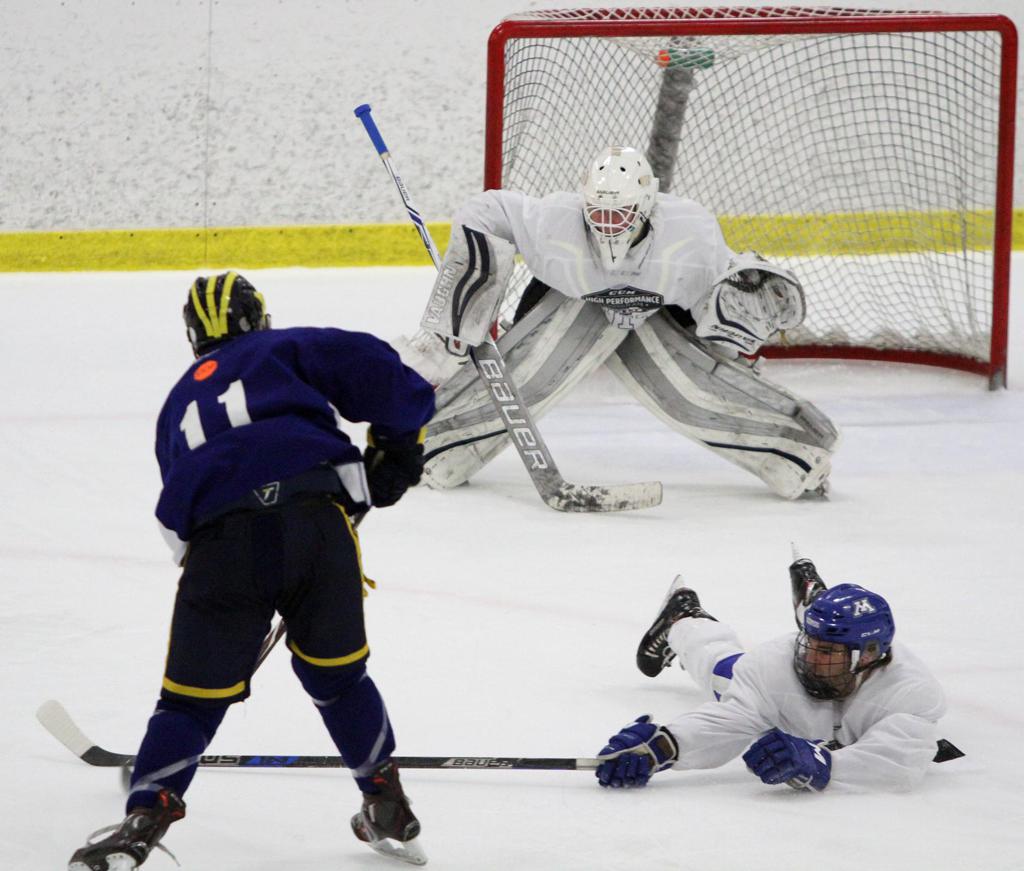 The Minnesota HP18s broke open a hotly-contested and late nightcap Friday evening at Plymouth Ice Center, scoring twice in the span of 30 seconds midway through the third period to knock off the Michigan Seniors.

The teams traded scores through the first two periods before the Minnesota (White) juniors strung together a pair of goals 27 seconds apart midway through the third period to rally past the Michigan seniors in dark blue 4-2.

Things played out fast and physical, with a full column of penalties with 11 over the final two periods and split about down the middle.

Zach Brydges (Cretin-Derham Hall) gave the White the lead on a goal assisted by linemate Isaac Henkemeyer Howe (Moorhead) with 9:29 to play. A short time later Tim Piechowski (Eden Prairie) added another, and the Minnesota juniors held on down the stretch. Piechowski now has four goals through two games.

Henkemeyer Howe had two assists on the night, as did forward Derek Roberts (Champlin Park).

Michigan’s goals came from Brad Baysore (Grand Rapids Christian) and Joe Phillips (Marquette). Dylan Montie (Catholic Central) picked up an assist, and now has five of them for the tourney. 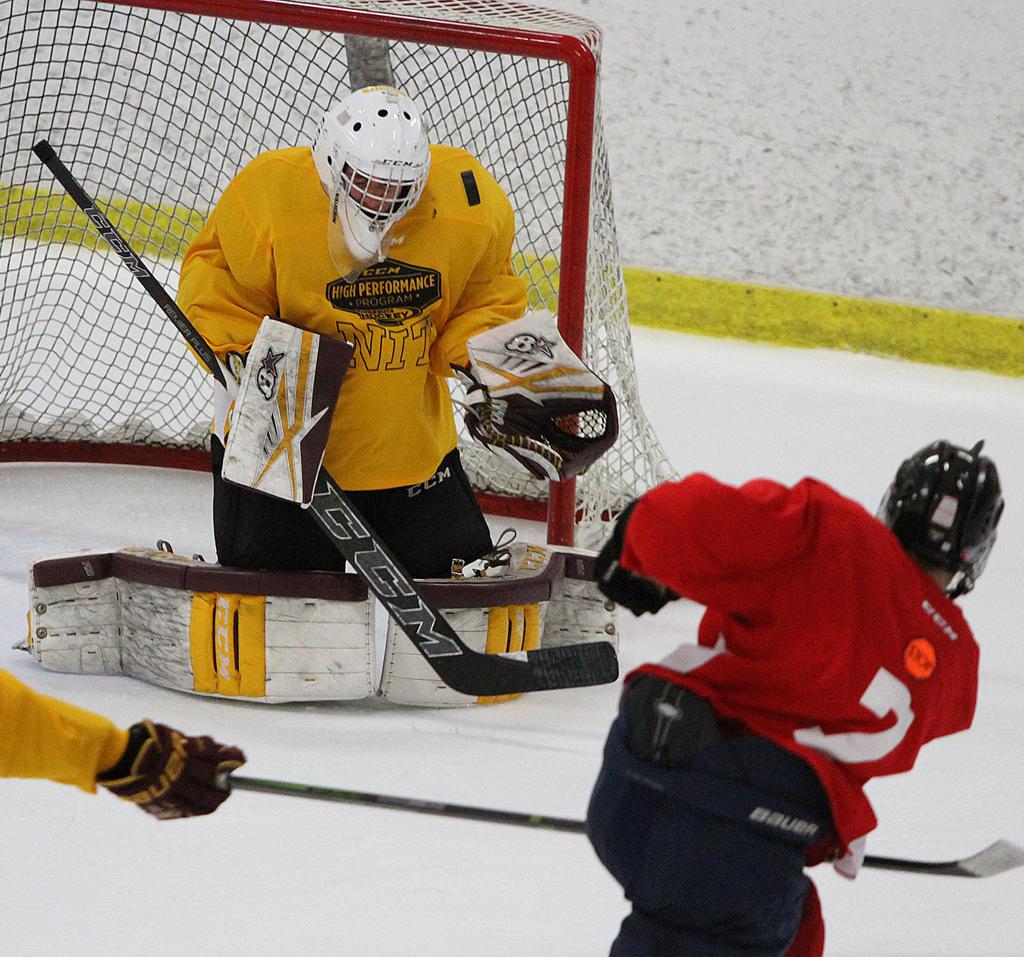 Minnesota SRs rallied to score three unanswered goals and worked its way to a 3-1 victory over the Wisconsin SRs Friday night at Plymouth Ice Center.

A pair from Minnetonka came through with a pair of goals late to seal the win in a contest in which they outshot the opposition 43-26 for the game.

Andrew Hicks delivered the game-tying goal with 5:54 left in the second period on a lob shot from the blue line that found the back of the net. In the closing minute of the third, Skippers teammate Matt Koethe poured in a short-handed empty-netter to ice the victory for the Gold squad from Minnesota.

Wisconsin jumped out to an early lead just 50 seconds into the game when Max Techel (Wausau West) scored for Red to stake the early lead. But Minnesota would chase and eventually catch Red, while Gold goalies Jackson Hjelle (Delano) and Max Eilefson (Irondale) put a lid on Wisconsin’s scoring outside of the game’s first minute.

Tied a 1 midway through the third period, Minnesota got the eventual game winner from an Aaron Myers (Thief River Falls) wrist shot from the left circle. It put Wisconsin in a hole they could not escape from as Gold tightened things up down the stretch.

Manning the crease for Wisconsin was Colin Ahern (Fond De Lac Springs), who stopped 40 of the 42 shots he faced.

Minnesota SRs even their record at 1-1 for the tournament, while Wisconsin SRs drop to 0-2. 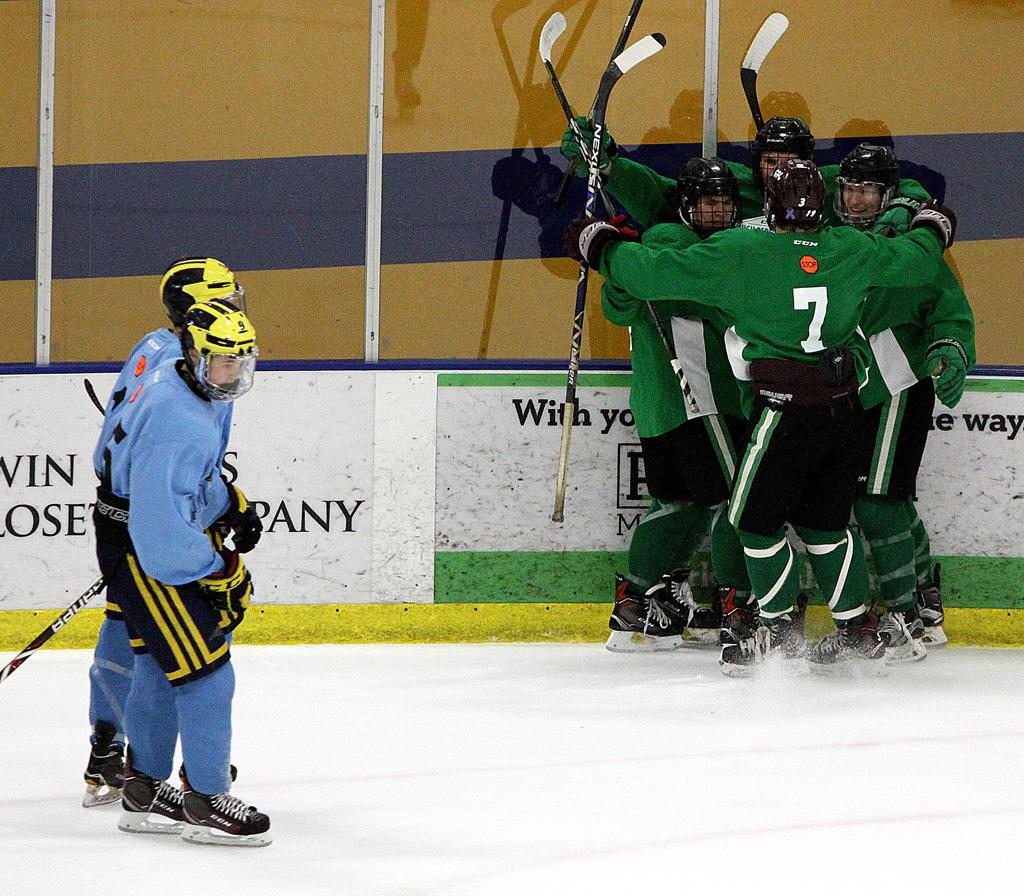 North Dakota celebrates the game-tying goal by Nick Brown with 1:08 left in the third period Friday. North Dakota rallied to defeat Michigan HP18 in a shootout 3-2. Photos by Drew Herron

A late score from Nick Brown (Bismarck Century) pulled North Dakota even in a game where they’d been chasing nearly the entire way.

The momentum followed the Greens into the shootout, where North Dakota prevailed 3-2 and capped off a stunning comeback over Michigan HP18 (Light Blue) Friday afternoon in what goes down as the fiercest battle yet of the tournament.

Michigan struck first and scored the first period’s only goal 10:07 into play when Brendan Tulpa (Hartland) put the Light Blues out front early. North Dakota would net the first equalizer 56 seconds into the second period when Dane Montgomery (Grand Forks Red River) buried a wrist shot during an odd-man rush.

The game was tied for another 10 minutes when Michigan reclaimed the lead on a goal by Connor McGrath (Cranbrook-Kingswood) with 7:55 left in period two.

Light Blue would play with the lead for nearly the next 25 minutes of action before Brown broke through for North Dakota. Michigan’s advantage in speed was countered with North Dakota’s grit and determination and Green won more battles late.

North Dakota improves to 2-0 in the tournament heading into Saturday, while Michigan HP18 drops to 1-1.

In net for Michigan, Brett Tome (Hartland) made 21 saves on 23 shots during regulation. At the other end, Nathaniel Bradbury manned the crease for North Dakota and stopped 24 of 26 shots. 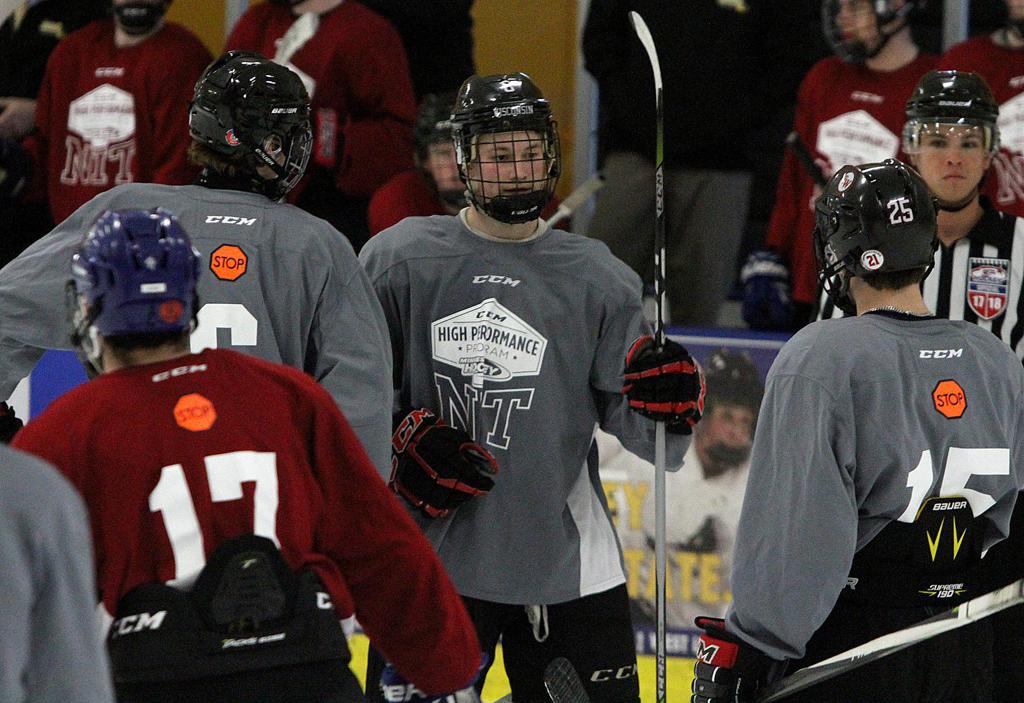 The Wisconsin HP18s (Gray) broke through with seven goals in the third period Friday that tore up a one-goal game against Massachusetts and handed it convincingly to the Grays via 10-2 final.

Andrew Malek (University School, Milwaukee) netted a hat trick on the game’s final goal with 3:40 remaining, and Jake Schmaltz (Madison Edgewood) finished with a pair of goals and four points to lead the Gray.

Brendan Olson (Eau Claire Memorial) struck on the power play 1:42 into the third period, and Wisconsin rallied from there with two more goals over the next 30 seconds.

In goal, Alex Cohen (Hudson) played all three periods to earn the win after stopping 15 of the 17 shots he faced.

At the other end, Massachusetts played a different goalie each period with Owen O’Brien (Marlboro) starting, Cameron Macoux (Lincoln-Sudbury) playing the second, and the third by Andrew Lorusso (New Hampshire Avalanche). Marcoux stopped all nine shots thrown his way, with O’Brien making 14 saves on 17 shots and Lorusso stopping 10 of 17 shots.

The victory evens Grays record at 1-1, while Massachusetts drops to 0-2 for the tournament.