Goalies Should Not be Shut Out from Coaching 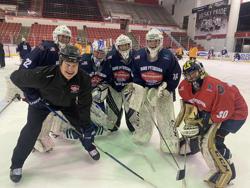 Another winter hockey season is underway.

It’s also the time of the year when people begin to realize what the coaches are or are not doing to improve the skill development of the goalies on their team.

Unfortunately, in a lot of cases, nothing is being done during scheduled practice times.

Some coaches believe that as long as their goalies are seeing pucks during practices they are getting better. That’s not necessarily the case.

I believe more coaches need to change the way they currently do business and improve on how they work with their goalies. Coaches need to break out of their comfort zone, so goalie development becomes a priority and not an after thought.

Sometimes coaches think that somehow the goalies will magically improve during the course of a season and become that much-needed difference-maker in big games. Unfortunately, it doesn’t usually work that way.

Some hockey association’s hire outside coaches to work with their goalies. This is certainly a step in a right direction. However, the fact your association provides goalie training periodically during a season is not an acceptable reason for ignoring your goalies during team practices.

The reality is, goalies spend considerably more time on the ice with their team than they do at any association goalie clinic. Constructive/productive use of a team’s practice time, in addition to any goalie clinic, is the key to developing goalies.

Figuring out how to coach goalies can sometimes be a challenging and intimidating aspect of the job for many coaches. However, it doesn’t have to be.

Here are some goalie coaching tips that can help:

There is a lot of good goalie development information available, including age appropriate practice plans, at www.usahockeygoaltending.com. There are also videos of drills and other information on the Minnesota Hockey goalie page.