Every coach can - and should - coach their goalies 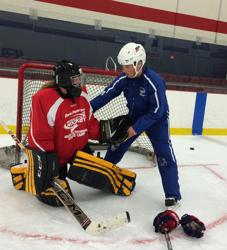 There is a crisis in American youth hockey, says Phil Osaer.

“It’s almost an epidemic,” he said.

In this case, it’s nothing sinister. It’s not health-related. But it absolutely does threaten the viability and quality of hockey in this country.

“We have so many great coaches doing really good things developing our players, but there’s a prevalent mindset that it’s OK for these coaches to not coach their goalies and be unwilling to learn to coach their goalies,” said Osaer. “They put their palms up and say, ‘I’m not a goalie coach. I don’t know what you guys talk about,’ as if we’re different. Goalies are players, too.”

Osaer, the goaltending manager for USA Hockey’s American Development Model, wants to change that for a number of reasons. The most fundamental one: to improve the quality of goaltending and the experience for youth goaltenders.

“The thing we are trying to emphasize is that goalies are players too,” Osaer said. “It’s the simplest position in the sport and maybe all of sports. We try to break down those walls.”

Goaltending doesn’t have to be esoteric

Roughly 90 percent of the players on a team are either forwards or defensemen. Naturally, then, if former players become coaches, there aren’t a ton of them who were former goalies. But that doesn’t mean they can ignore the position.

“It’s not an excuse that you didn’t play the position,” Osaer said.

To help show coaches how they can work with goalies, USA Hockey has created a network of goalie coordinators around the country to bring goalies and coaches together in an effort to show what kind of coaching netminders need.

Sessions have been held all around the country – in the Rocky Mountain District, Minnesota, New York, Michigan, California, New England and Florida, just to name some of the locations – and have benefitted coaches who are willing to get slightly out of their comfort zone and learn the basics of coaching goalies in practice.

“We’re empowering them to believe what their intuition is telling them,” Osaer said of coaches learning to give better instruction to goalies.

Osaer played collegiately at Ferris State and had a long minor-league goaltending career after being drafted by the St. Louis Blues. Afterward, he coached in the USHL and served as the director of hockey operations at Michigan State University before coming to USA Hockey in 2015 and immersing himself in the nation’s youth goalie coaching culture.

“We have great specialized goalie coaches all over our country and they develop goalies’ strategies, help with the mental approach to the games and stay on top of evolving trends in the game and position,” said Osaer. “These coaches are in large part responsible for scoring being down at the highest levels. They’re really important and we need them engaged in what we are trying to do as country. But each player who plays goalie does not need a specialized goalie coach from the start. Everyone can make that decision as it fits their player, family and situation. What we really need is to give all of our players who are in net a good environment to develop at every practice and game. That can be accomplished through effective communication between all parties involved in the goalie’s development (parents, coaches, specialized coaches and the goalie).

“We encourage coaches to get on the ice during goalie sessions within their association, and specialized goalie coaches to be engaged with what is going on during team practices and games. When players achieve their goals and dreams in hockey, everyone will take credit for being part of their development, so programs need to be genuine and make sure everyone really is engaged in their complete hockey development environment.”

Everyone pulling in the same direction

To that end, everyone needs to be unified and committed. The clearest way that comes through is in practice. Osaer, along with goalie coaches from all levels, helped design age-appropriate drills that coaches can run with their goalies during team practices at all levels of the American Development Model.

“For example, if you’re going to start a small-area game in the corner,  why not have the goalie start on the post,  push out to the top of crease have the coach shoot low for the goalie to make a save and control the rebound to the corner,” Osaer said. “Then the goalie is getting a quality rep, and the players are reacting off a rebound, which is game-like as well.”

There are multiple benefits, he adds.

“Once hockey coaches see how they can implement goaltending into each drill, it starts to come naturally,” Osaer said. “Then they want to design drills and show off their creativity.”

Getting goalies more involved in practices also gives coaches a better understanding of their mindset and why they react certain ways to certain shots. It’s one thing to criticize or praise a goalie for allowing a goal or stopping a puck. Accountability means knowing why they did or didn’t do their job and working to develop them accordingly, Osaer says.

“We’re bridging the gaps through education and accountability. And we want our goalies to be accountable for what they do and their own practice habits. Without that, coaches can’t develop players,” Osaer said. “When everybody meets at the intersection, you’ll have success. If anyone is going in opposite direction, you won’t.”

The long-term goal of American youth goalie development is both lofty and specific: Osaer says by 2030, USA Hockey wants to see U.S. goalies playing at least 51 percent of all the available minutes in the NHL and National Women’s Hockey League (NWHL).

Short-term goals are harder to quantify but still easy to see.

“We hope more kids will want to play goalie and are advancing in the position,” Osaer said. “Are players becoming better goal-scorers because goalies are practicing with better habits?”

The first step is stopping the goalie-coaching epidemic before it spreads.

Go to www.usahockeygoaltending.com for more resources and information.