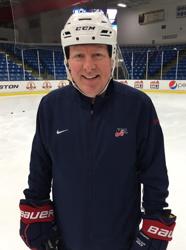 “Adding more resources and support for goaltenders, both on the national level and the local level, is a priority for USA Hockey and our American Development Model,” said Phil Osaer, USA Hockey ADM manager for goaltending.

“The goaltending development coordinators will play an important role in that process, giving young goaltenders support and guidance from experienced coaches with a wealth of goaltending experience.”

During a recent goalie summit in Michigan,  the coordinators created a collection of goalie development practices and devised strategies for introducing more athletes to the position and improving their development opportunities.

The long-term goal of the program is to have Americans comprise 70% of NCAA and Tier 1 Junior goalie minutes played by 2022-23, and to have 51% of NHL and NWHL goaltender minutes played.

“USA Hockey is thrilled to have Steve join us as we launch this new, and very important initiative,” said Osaer. “USA Hockey and Minnesota are lucky to have someone with Steve’s wealth of knowledge and experience in developing some of the best goaltenders in our country. This program is a huge step toward making sure the goaltenders playing this unique position are given all the tools to succeed and reach their highest potential.”

Carroll, director of the Dave Peterson Goalie Camp as part of the CCM Minnesota Hockey High Performance program, will be leading Minnesota Hockey’s efforts to educate and facilitate community associations in implementing a goaltending development curriculum. He will be also be tasked with working with goaltending coaches as well as supporting grass roots programs such as Try Goalie Days and Goaltending clinics.

“I am very excited that USA Hockey has launched this much-needed program,” said Carroll. “I want to thank USA Hockey for including me, and I can’t wait to get started. Minnesota produces more elite talent than anywhere else in the country, and I want to make sure that is true of the goaltending position.”

Carroll has been active in coaching and goaltending development since his playing days at Minnesota State University, Mankato, where he was a two-time All-America goalie and the tournament MVP of the 1980 NCAA Division II National Championship team. He also serves as an assistant coach of the Gustavus Adolphus College women’s hockey team.

Minnesota Hockey, a USA Hockey affiliate, is the governing body of youth hockey in Minnesota. With over 67,000 registered players and coaches, it is the largest state governing body for hockey in the United States.