Peewee & Bantam B Teams Set for Drive to State 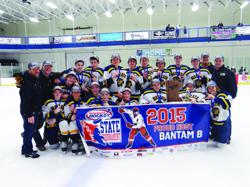 Minnesota Hockey is excited to announce the complete list of Peewee B and Bantam B teams that will be competing for a chance to represent their communities at the Minnesota Hockey Region and State Tournaments. For the third consecutive year, The Drive to State is presented by Select Heartland Chevy Dealers and will feature 35 Region Tournaments on February 26 through 28, followed by 14 State Tournaments being played March 11 through 13.

With 107 and 125 teams respectively, the Bantam B and Peewee B levels feature more teams than any other level of youth hockey in Minnesota. Many districts have 10 or more teams within their area, making teams’ #Drive2State one of the most competitive and exhilarating journeys of their lives.

The full list of Bantam B and Peewee B teams is available below. The teams are grouped by level, district and the region they will be in for Region Tournaments. For more information on the 2016 Region and State Tournaments, visit their respective web pages.