For many in Minnesota’s hockey community, the announcement of this year’s Model Camp was nothing new. The University of Minnesota has been hosting Model Camp for over 30 years. As the 2014 Model Camp concluded today though, there’s one thing all of the participants can agree on: Model Camp has a new look and a bright future.

From the beginning, Model Camp was designed to give college coaches an opportunity to interact with the state’s best players while helping them take their game to the next level. Unfortunately, the expanding list of development camps during the summer forced players to choose between other camps, enjoying the summer and participating in Model Camp. Over time, the popularity of the camp, particularly among Minnesota’s top players, dropped off.

“For us, going out to Buffalo [for national camp], Rochester in the past, and seeing our elite Minnesota kids have a wonderful opportunity – there was only 20 of them,” said Potulny, who is also an Assistant Coach for Minnesota. “We want to bring that to Mariucci and give 80 of them an opportunity to be touched by high level coaches and to play in front of them.”

In order to have an immediate impact, Potulny took a three-pronged approach to enhancing the camp. He formed a partnership with Minnesota Hockey and the Reebok High Performance programs, the premier development path for youth and amateur players looking to advance beyond high school hockey.  Then, he reached out USA Hockey and its ADM team for insight on increasing the presence of a long term athlete development approach.  At the same time, Potulny also chose to place a significant emphasis on the involvement of college coaches from the other major universities in Minnesota.

The first step in remodeling the camp began with developing a hybrid structure with the Reebok Minnesota Hockey High Performance (“Reebok HP”) programs.  To maximize the camp’s impact, it was critical that it remain on a college campus to provide that “real” college feel while targeting the players that reach the highest levels of the Reebok HP programs.

High Performance Director, Mike MacMillan, and Potulny worked diligently to create a camp that could achieve both organizations’ goals of putting on a world class development experience for the top players in Minnesota ages 15-18 within a framework that met their needs.

Based on the players’ feedback, they did just that.

“Just knowing that all of the top end kids were going to be here,” said Stillwater High School goaltender, Josh Benson, when asked what motivated him to attend Model Camp. “Just playing with a lot of top end [guys] that are all about my age – it is fun going against them in the summer time. You don’t really get to go against all of them at once during the season.”

“Out at that national camp, there were a lot of good players,” said Lakeville North forward Henry Enebak, who participated in the Boys Select 16 Player Development Camp. “I’d say that this is honestly a little better than out there in some parts because you have a bunch of different age groups, and you have the top kids in all age groups. National camp - that was really good hockey, but Minnesota Hockey, I mean it’s pretty hard to beat it.”

While excited that the partnership had the intended impact, Potulny wasn’t surprised at all.

“It’s been a monumental shift in the way the camp was perceived,” said Potulny. “Any time you do something with somebody like Minnesota Hockey who runs everything at a first class level – they have the best coaches, they’re prepared, they’re organized – the players coming understand that if they see that Minnesota Hockey tag, the [Reebok] HP tag on it, they know that they’re going to get a wonderful experience and a great camp.”

One of the other major changes to the camp was adopting more of a long term athlete development (LTAD) approach.  The main goal was to not only add an LTAD component during camp but to take a broader look at how the timing of the camp impacts players’ training calendars and overall development.  By doing this, they were able to find a date that allowed players to take breaks, attend other camps and still make it to Model Camp.

“The one thing we have tried to instill in all of these players, and even show video of it is, when you are on the ice, make sure it is quality, quality ice time,” said Potulny. “It’s not about quantity. It’s about quality. The best way to do that is to try in the beginning of the summer to make a plan for yourself of when you’re going to skate, when you’re going to take time off and stick to that plan.”

The other important concept the coaches want to instill is what it means as a player to have a long term view of their development. To do that, they reached out to USA Hockey’s Regional ADM Manager for Minnesota, Guy Gosselin.

“Guy Gosselin came in and talked about the long term development of an athlete and how some people move at different paces,” said Potulny.  “I think that’s important for our guys to see [that] because there is different timing for everybody to go through the maturation process. As long as they understand that if they continue to do the right things they’re going to get where they want to get to, then we’re doing our job.”

Possibly the most surprising modification to Model Camp was the increased presence and involvement from other university coaches and nearby opponents.

Division I teams, especially those within the state, are typically viewed as rivals and fierce competitors. The idea of having them all work together in the same camp almost seems a little foreign. Yet, it appears as if this could be the variation that has the most significant impact, and the coaches wouldn’t have it any other way.

“By bringing in those Minnesota schools and a couple of outlying areas, whether it’s Notre Dame or Ohio State, now, you get these players surrounded by places they want to go,” said Potulny.  “Maybe, there’s a kid that’s grown up in Bemidji his whole life…. and his coach [at Model] is Travis Winter from Bemidji State. That’s something for that young man that he can have a wonderful experience.”

After helping out with this week’s camp, Winter, who joined the Bemidji State staff as an Assistant Coach this summer, completely agreed with him.

“To give back to the youth and high school programs a little bit and get out here and show them some different things that we do, they get to see a lot of different things so I think it’s great for them,” said Winter.  “There are obviously a lot of really good coaches at the college level from Minnesota so you get to learn different ideas every day.”

The bottom line is that the coaches want to leave a lasting impression on each wave of Minnesota players that attend camp.  If that means working together with coaches that they will be competing against in just a couple of shorts months, they are glad to do it.

“We’re only as good as our players can be,” said Potulny. “You look down the rosters of all the teams in Minnesota, and you know what, you’re going to have 85 percent of them from our state. It’s a long term investment in the future of not only our young players but our own programs as well.”

View All
Tweets by @MinnHockey 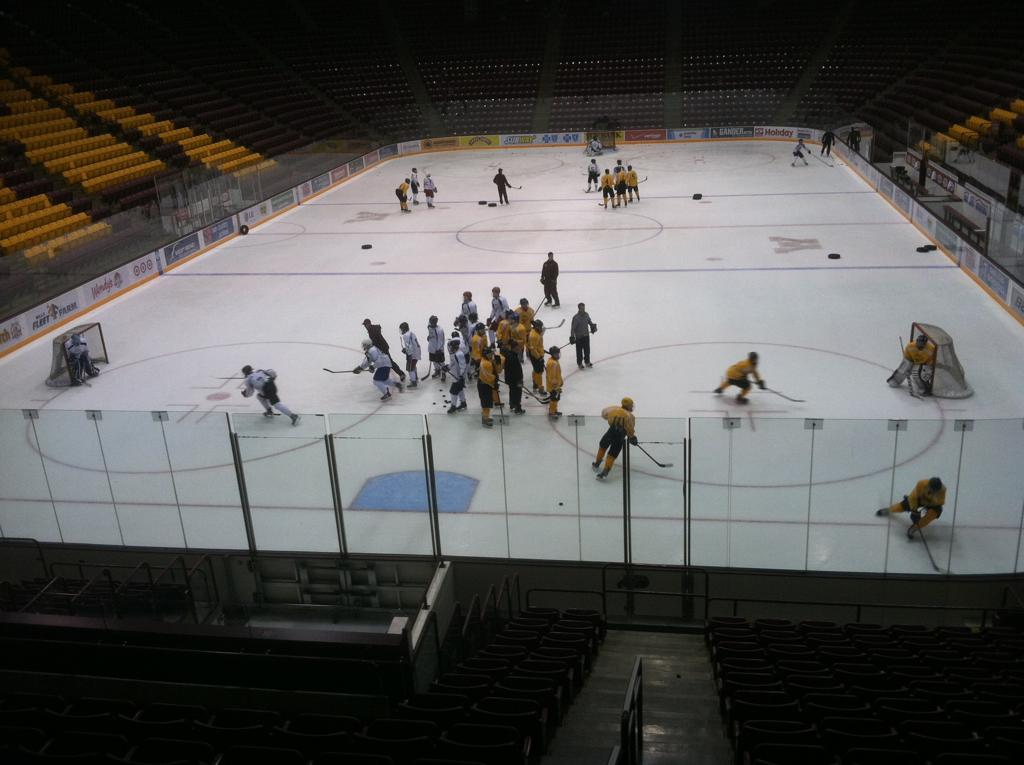 Each practice at Model Camp was designed with specific intended outcomes.  The first day used flow drills to help players find their legs and ramp up the speed.  The second focused on transition.  In the final practice (above), the players split into forward and defense groups to emphasize individual skill development and small area games. 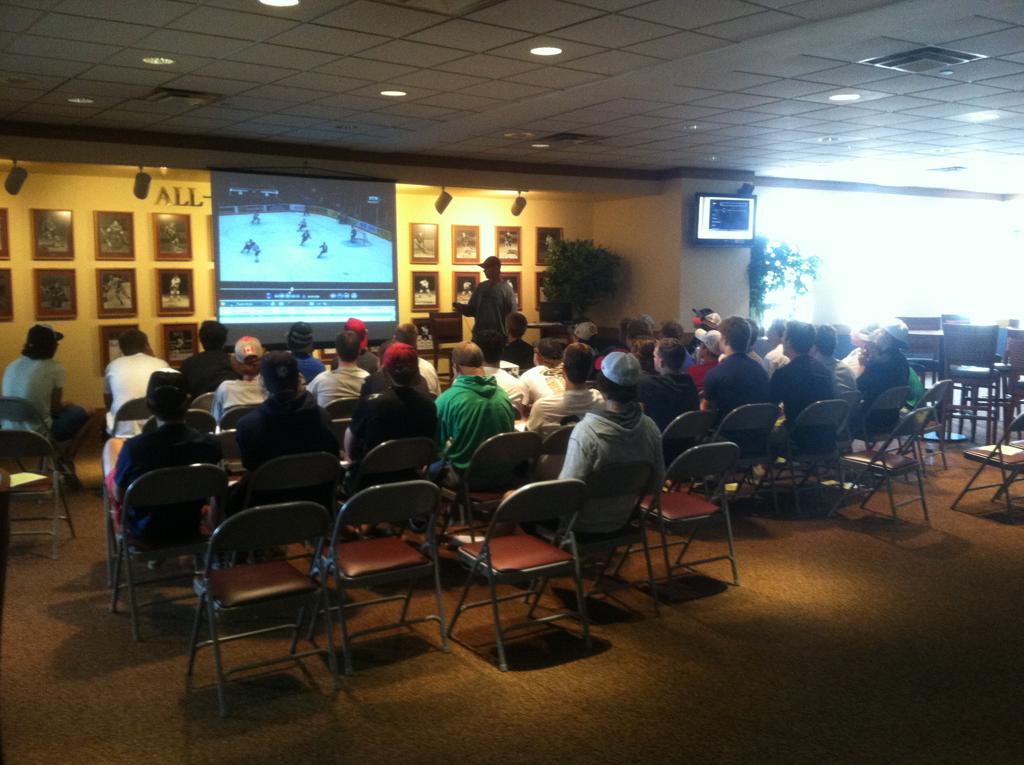 The camp also consisted of several off-ice components. In the image above, Coach Potulny walks the players through a video session modeled after a college team's typical pre-scout routine.