Holiday Gifts for the Hockey Family

Festive lights, merry jingles and fresh snow are a few final reminders that the holiday season is here. Though the Stanley Cup might top your child’s holiday wish list, chances are that’s going to be hard to get during the middle of the season. But whether you’re a player, parent, fan or coach, sharing your passion for hockey with those around you is a part of what makes the holidays so special.

So while you’re making your list and checking it twice, be sure to include some of these top-shelf hockey gifts that go beyond just sticks and skates. 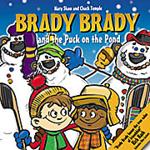 Read Into It: Brady, Brady books are the perfect examples of how hockey can teach us as much off the ice as it can on it. The colorfully illustrated children’s books teach life lessons just like the game itself. For the older readers and avid history buffs, Minnesota native Ross Bernstein has a collection of State of Hockey-based books and biographies. Frozen Memories, Old Time Hockey and America’s Coach are just a few notable titles by Bernstein that would make anyone smile.

Gooooal!: Who doesn’t love to see the red light glowing around and around after scoring the game-winner? Goal lights are one of the more popular gifts for hockey aficionados each year. Whether you’re playing outside on the backdoor pond or in the basement, a goal light adds some excitement to the competition. Don’t forget to have your favorite goal song handy for when you light the lamp!

Film: “I know that location!” or “I’ve skated there!” are common phrases out of Minnesotans’ mouths when watching locally based The Mighty Ducks (1, 2 and/or 3) and Miracle. Check out the documentary film Pond Hockey, which features local legend Neal Broten. Mystery, Alaska is another fun hockey movie kids and adults love. In case you haven’t added these hockey classics to your DVD shelf, they make great go-to options for all ages.

Off-Ice Games: You don’t have to enjoy hockey strictly on the ice. Pick up some mini-sticks for knee hockey in the basement or hotel hallways. Look into bubble hockey featuring Team USA vs. Russia for the entire household, or test the brightest of your family’s hockey minds with hockey-themed trivia.

College Craze: The Minnesota hockey community is lucky enough to have not one but two college conference championships played here this March. Big Ten Hockey, home to the Minnesota Golden Gophers, and the newly formed National Collegiate Hockey Conference, complete with St. Cloud State University and the University of Minnesota-Duluth, will be hosting their men’s conference championships at Xcel Energy Center and Target Center March 20-22. Get your B1G tickets and NCHC tickets today.

Also, don’t forget four of the five Division I Minnesota men’s teams are in the North Star College Cup at Xcel Energy Center on Jan. 24-25, and the Gopher men and women are heading outside at TCF Stadium on Jan. 17 for the Hockey City Classic. Regular-season tickets to any of our collegiate teams also make great gifts.

Gear Up and Train: There’s always some type of equipment or training aid that will be added to a hockey player’s wish list. CCM’s latest skate, the CCM RBZ, boasts being fiercely fast and Total Hockey has a stick selection like none other. Stick weights and off-ice practice pucks will help players improve. Don’t leave without nice stocking stuffers like tape, stick wax, sweet stick, equipment deodorizers or a repair kit!

U-S-A! U-S-A!: Ready for the Olympics? Don your favorite USA Hockey gear, including the 2014 Sochi sweaters, patches, sweatshirts and more at www.ShopUSAHockey.com.

Be sure to check out Total Hockey, the Hockey Lodge and the brand-new USA Hockey Store at the Mall of America for more ideas.

What’s the best hockey gift you’ve ever received? Tell us on Twitter at @MinnHockey.

Do you know a coach who strives to win while also pursuing the important goal of teaching life lessons through spor… https://t.co/WqclNV4TRK

Not able to watch Hockeyland in theaters or want to see it again? Check out the film now on Amazon and Apple TV! https://t.co/N1eg85Yzm3

Congratulations to Grace Zumwinkle and Tyler Watkins on being named our Alumni of the Week, presented by… https://t.co/3c6K1WkiXX

RT @WildGivesBack: Don't forget to bring 💲💲CASH💲💲 to help support our partners @MinnHockey when you purchase a raffle ticket tonight at the…