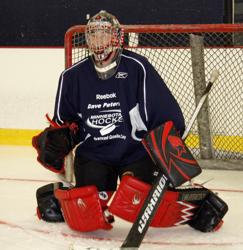 Netminder Charlie Lindgren from Lakeville, Minn. has been named winner of the 2013 USA Hockey Dave Peterson Goalie of the Year Award.

Lindgren, who trained at Minnesota Hockey's Dave Peterson Reebok High Performance Goalie Camp in 2010, helped the Sioux Falls Stampede this past season to the United States Hockey League’s Western Conference crown and a second-place finish overall in the league with a 35-14-2 regular-season record.

Lindgren will take his talents to St. Cloud, Minn., in 2013-14 where he will play for the St. Cloud State University Huskies.

Lindgren and the other player of the year award winners will be honored at a banquet in Colorado Springs, Colo., on June 7.