The Art of Russian Hockey 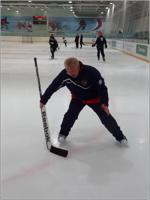 In the 60’s and 70’s, the Russians dominated hockey in international competition, winning four straight gold medals in the Olympics. Over 30 years later, they continue to produce elite hockey players. Following their trip to Russia, two Minnesota coaches provide a comparison of the playing and coaching styles of Russia and the U.S.

This past October a total of 24 Americans, including ten players and two coaches from Minnesota, traveled to Russia for the experience of a lifetime. The trip was arranged through the U.S. State Department and Russian Ministry of Sport to give these kids the chance to learn about a new culture through the sport of hockey.

Over the course of ten days, the 12 Minnesotans were exposed to the pulse of Russian hockey.  The group met international legends Vladislav Tretiak, who is now the Russian Hockey Federation President, and national goalie coach, Vladimir Myshkin, visited with NHL stars including Ovechkin and Datsyuk, practiced with national teams, watched a couple of KHL games and got to take pictures with pieces of hockey history like the World Cup.

“Every day got more and more impressive when we were over there,” said Scott Macho, head coach for South St. Paul boys’ varsity hockey team. “It was a once in a lifetime opportunity. There’s no question about it.”

All in all, the players and coaches were exposed to so much during their short trip that it was at first difficult to put into words everything they observed.

“It’s still pretty overwhelming,” said Jess Christopherson, head coach of the Coon Rapids girls’ high school team, following the trip. “Everyone asks, ‘how was Russia?’ I don’t even know how to explain it to you. It far exceeded any of our expectations.”

Several months later, Christopherson and Macho have had time to reflect on the trip and compare what they experienced with the nuances of hockey here in Minnesota.  Although many people are familiar with the general style of Russian hockey players, some of the details may surprise you.

“Russian style of play, boys – fluid, creative, forwards are constantly circling,” said Herb Brooks in the Disney film Miracle, which highlighted the story of the gold medal winning 1980 USA Olympic team. “They don’t look for a man so much as patch of ice. Get the mismatch 2-on-1, easy goal.”

Russian players were known for their skill and creative ability long before the Miracle on Ice, but to this day, it remains a staple of their game.  This style can be tied directly to their emphasis on flow drills in practice which continuously puts players in a position where they are encouraged to use an East-West style with multiple passes with the goal of creating open space in order to make plays.

“They did a great job of puck support,” said Macho. “Their players were much better at finding open areas, open spots where they could get the puck.”

One advantage of the Russian style that isn’t very obvious is how it teaches players to think the game. It shows players there are a variety of ways to attack a defense, and after enough repetitions, the Russian players develop a mental component that isn’t as common at the youth and high school levels here in America.

“They don’t dump and chase,” said Christopherson. “They are making plays to try and get you to do something. We are going to make this pass so you go here and then here’s our next step. It’s one thing to tell players to try and do that, to teach them. They are at a point where it is habit.  It’s really impressive.”

To execute this style requires a degree of skill and skating ability so it was no surprise to see skating as a focal point during the Russian practices. The extent to which they did focus on it though caught our coaches a little off guard.

Even for their elite players, every practice included skating drills with and without the puck.  This was a noticeable difference for our coaches who are used to seeing skating specific drills, such as those focusing on edges and stride, get phased out of practice plans before mid season rolls around.

“We do a lot of skating with our young players,” said Christopherson.  “It gets less and less every year.  The focus is towards other things – cycling, forecheck, and neutral zone play. Tell a high school kids to do an inside edges drill, they will kind of look at you like, ‘what?’.”

It wasn’t just about giving the players a chance to develop their skating either. The coaches honed in on the details of players’ technique during each drill, making sure each repetition had an impact.

“A lot of times they’d skate with a kid and help correct form or stride,” said Macho. “Sometimes as coaches we just stand back and let kids go through the drill. Nothing really gets corrected immediately. Over there, they were willing to let other people wait while they corrected that one stride or that one movement.”

“The coaches would actually stop drills quite often, even if it was a warm up drill,” added Christopherson.  “If someone wasn’t doing something right, they would stop and break it down.”

The Russian coaches’ individual focused, detail-oriented style wasn’t the only notable comparison to coaches back home though.  When asked, ‘what the number one way to tell a Russian coach or practice from an American one?’ the answer was unanimous: volume level.

Watch any sports practice for a local high school team, whether it is football, basketball or hockey, and you are sure to hear loud, sharp whistles directing players through practice.  Add in coaches yelling at players across the playing surface to make sure they are heard, and a high volume level becomes the norm.

“They rarely used a whistle, and when they did use whistles, it was very, very soft,” said Macho about the Russian hockey coaches.  “Very rarely would they yell across the ice. They would always go to the kid or to the couple players and talk to them almost like a normal conversation.”

Don’t get the wrong impression though. There were also quite a few instances where the Russian national coaches and Minnesota Hockey or USA Hockey preach the same ideas, especially when you consider the principles of the American Development Model (ADM).

For instance, the Russian coaches included a substantial amount and variety of small area games into their practices.  In fact, it was in those types of drills that the Russian players’ ability to create space and provide puck support to each other was so evident in comparison to the American players, who preferred to attack the net with every possession.

“Another similarity is we want athletes,” said Christopherson. “They are a big believer in multi-sport athletes and in taking a break. There’s nothing wrong with taking two months off to play baseball or just being a 12 year old.”

This was really important to the Russian coaches who expressed disgust at the idea of kids playing hockey year round.  To them, it was critical that kids had time off.  They scoffed at the idea of some kids playing 50-60 games over the course of a year, emphasizing that practice and training are where players really improve and develop, not games.

The support of these ADM principles isn’t to be taken lightly when it comes from those with the hockey pedigree of Tretiak, Myshkin and Igor Tuzik, Vice President of the Russian Hockey Federation. For as many differences as there are between the Russian and American styles of hockey, there are apparently certain beliefs everyone can agree on.