Too Much of a Good Thing?

With about 45 million kids participating each year, organized sports play a prominent role in our society.  Youth sports provide kids with exercise, entertainment and life lessons. Physicians across the country should be excited about the future of our health, but many are worried about an emerging trend of overuse injuries.

Dr. James Andrews who is famous for his work with professional athletes, including Adrian Peterson’s recent ACL surgery, noted in an interview with The Plain Dealer that he has witnessed a five to sevenfold increase in injuries in youth sports since 2000.  He also noted that many of these injuries used to only be seen in mature, adult athletes.

Experts seem to be in agreement about what is causing this rise in overuse injuries: early specialization and the overwhelming desire to play professional sports.  These two factors have been the driving force behind increases in the frequency and intensity of training before most young athletes are physically able to handle it.

To make matters worse, most of the time these injuries don’t show up immediately.  A young athlete may not actually be affected until several years later.  Safe Kids USA estimates that overuse injuries account for half of all injuries in middle school and high school.  Many of those can be tied problems with earlier training programs that are just starting to present issues.

Overuse injuries typically result from excessive and repeated use in a particular activity that end up affecting the athlete's bones, muscles or tendons. These aren’t caused by a single event but are a characterized by a series of small injuries to an immature body that eventually results in enough damage to require significant periods of rest to recover or even surgery in some cases.

These injuries are well publicized in certain sports. When you hear about youth or high school baseball players that already need or have undergone Tommy John surgery, the number one cause is overuse. In gymnastics, the sport’s focus on early specialization means many young girls end up with severe injuries like Sever’s disease, osteochondritis dissecans and stress fractures before they even become teenagers.

While it is a little bit more difficult to pinpoint overuse injuries in hockey, they are definitely still occurring. Common examples in hockey stem from three main areas: back, hip and knees.  Each of these joints are continuously being impacted while playing hockey because of their role in players’ posture and skating stride.

In each of these cases, an overly intense training program at too young of an age leads to injuries that require significant periods of rest at the very time when these athletes need to be ramping up their training. 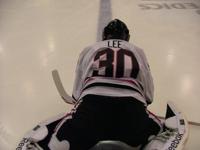 Mike Lee (Roseau, MN) gets a good stretch before a game during his days with SCSU.

While overuse injuries are a growing concern, they can be prevented.  Coaches and parents must work together to ensure their kids aren’t exposing themselves to the potential for these injuries. The Children’s Hospital in Boston recommends following these guidelines:

In addition to these guidelines, it is also important for youth players to be taught proper technique and to be fitted with correctly sized equipment.  Each of these can place undue stress on players’ bodies if overlooked, increasing the likelihood of overuse injuries.

@Phunnsie A number of options were examined but given the scope of the programs and unknown length of current circu… https://t.co/xJo8GMq0gS

@Phunnsie The programs included in the cancellation are scheduled over the next six weeks or are based on the resul… https://t.co/4dQNGDBNBK