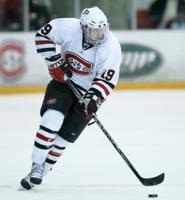 After leading the SCSU Huskies to a share of the MacNaughton Cup with his NCAA D-I leading 34 assists, Drew LeBlanc (Hermantown, MN) is drawing Hobey Baker attention.

Hockey players love watching hockey. Whether it’s the Wild, Gophers, Huskies, local high school squad or other team – if we can’t make it to the rink, we want to tune in on TV or online. But can it make us better players? Absolutely – if you’re paying attention correctly. Forwards, defense and goalies can all pick up tips for their respective positions. So what is the right way to watch hockey?

Go watch a game in person if you can. Unlike TV, you’re able to see the entire ice and watch the full play develop. Breakouts, power plays, positioning away from the puck – it’s easier to hone in on certain areas of the game that the cameras just can’t focus on. You also get a better sense and feel of the game while watching up close and personal.

Forwards will want to see highlight-reel goals from their favorite players. Maybe they’ll get to see some great stickhandling maneuver/shot and then try to replicate it on the ice or in their driveway. That’s great! But there are many other crucial components to making a forward successful.

Defensemen look at the game differently than forwards. Understanding the game at all positions should be something every player strives for. Defensemen can think about these components of the game:

Special teams are critical to team success. And if you know how to play on the power play and penalty kill, chances are you will see more ice time.

Power play: Key in on the defensemen and forwards as they break out of the zone. The puck might be skated up the zone or passed up-ice. Watch the power-play unit try to enter the offensive zone. Are they able to gain control and set up? Keep an eye on puck movement and what players without the puck are doing to create scoring opportunities.

Penalty kill: Are the penalty killers playing aggressive and pressuring the opponent? Or are they playing conservative while just trying to keep the puck around the perimeter? See if the penalty killers are communicating with each other and if they are using active sticks in passing lanes. Watch for players to try and block shots.

Adam Wilcox (South St. Paul, MN) has been a big part of the #2 ranked Golden Gophers' success this season, posting a 1.85 GAA.

“Goalies learn in different ways,” said Steve Carroll, USA Hockey’s Minnesota District Goalie Coach-in-Chief. “One way they can improve their game is by watching how goalies perform at the high school, college or professional level. There are lots of little things they can see and perhaps incorporate into their game.”

Here are 20 things Carroll encourages young goalies to look for when watching goalies play in person or on TV.

“It’s also a good idea to take notes. That way they compare the play of different goalies and remember what they saw,” Carroll said.

Effort. No matter what position, one thing to always watch for and appreciate is effort. Chances are, the team that puts forth the best effort will come out on top. They will win the 1-on-1 battles, collect the loose pucks, block shots and score the gritty goals. They are the difference makers and their hard work and attitude rubs off on the rest of the team. A team giving 110 percent is always a fun team to watch and play with.

Great opportunities for families to receive help with equipment or participation fees! https://t.co/GArtrLC2VI

RT @Jaggirlshockey: If you would like to help the Ryan family, please visit https://t.co/hmMbi1Ab9w

Sending thoughts and prayers to the community of Bloomington, Jaguar hockey and Coach Ryan's family as they try to… https://t.co/b3nrD215OP

RT @MinnHockeyHP: B16: Tanner Bruender with the lone goal and fellow Chaska native Carter Wishart with 21 saves as Section 2 takes a 1-0 ha…

RT @MinnHockeyHP: B17: HP 16/17 Festival wraps up Sunday at PIC with another convincing win for White (8), A big Red wall was put up by Sec…