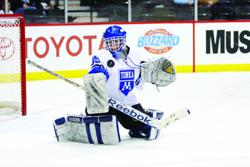 Sydney Rossman of Minnetonka High School has been named the Let’s Play Hockey Senior Goalie of the Year, the newspaper announced Feb. 24 at the annual Ms. Hockey Awards Banquet. The award is presented annually to the top Minnesota senior goalie in girls’ high school hockey.

One of the state’s top goalies the past four seasons, Rossman posted outstanding numbers for the Skippers. The owner of a 16-3-0 record, Rossman had a 1.13 goals-against average and a save percentage of .937. Splitting time with junior Hannah Ehresmann, Rossman allowed one or fewer goals in 14 of her 19 starts, including four shutouts. Three of Minnetonka’s four losses on the season came when Rossman allowed more than one goal. She ended the season on a nine-game winning streak.

Minnesota’s top-ranked goalie for the past three years in the Minnesota Hockey Reebok High Performance Program, Rossman backstopped the Skippers to the 2012 and 2013 Class AA state titles, and was the backup to 2011 Senior Goalie of the Year Julie Friend during Tonka’s first state championship season. She will continue her hockey career at Quinnipiac in the fall.

“Syd is a one-of-a-kind special goaltender and teammate,” Minnetonka head coach Eric Johnson said. “She is a focused competitor on the ice and a humble, caring teammate off the ice. Syd has overcome challenges with her consistent positive attitude and strength of character. These challenges have included having to share the net with another elite goalie while understanding that she would not have to share the net at most other schools.”

Off the ice, Rossman owns a 3.8 GPA and is a member of the National Honor Society. Rossman has participated with the Tonka Leadership Challenge and volunteers her time with It’s Your Choice and Dinomights Inner City Youth Hockey.

“Syd is one of the most humble and high character people that I know, always putting the team and others before herself,” Johnson said. “Young players in our program look up to her and love her.  They are modeling after her by doing their homework in school and working hard at mastering their game skills.”

The other finalists for the award were Erin Deters of Sartell/Sauk Rapids, Lindsey Hartfiel of Buffalo, Dayton Hilgert of Warroad and McKenzie Johnson of Eden Prairie.

The award is sponsored by Let’s Play Hockey, the Minnesota Wild and Shock Doctor.