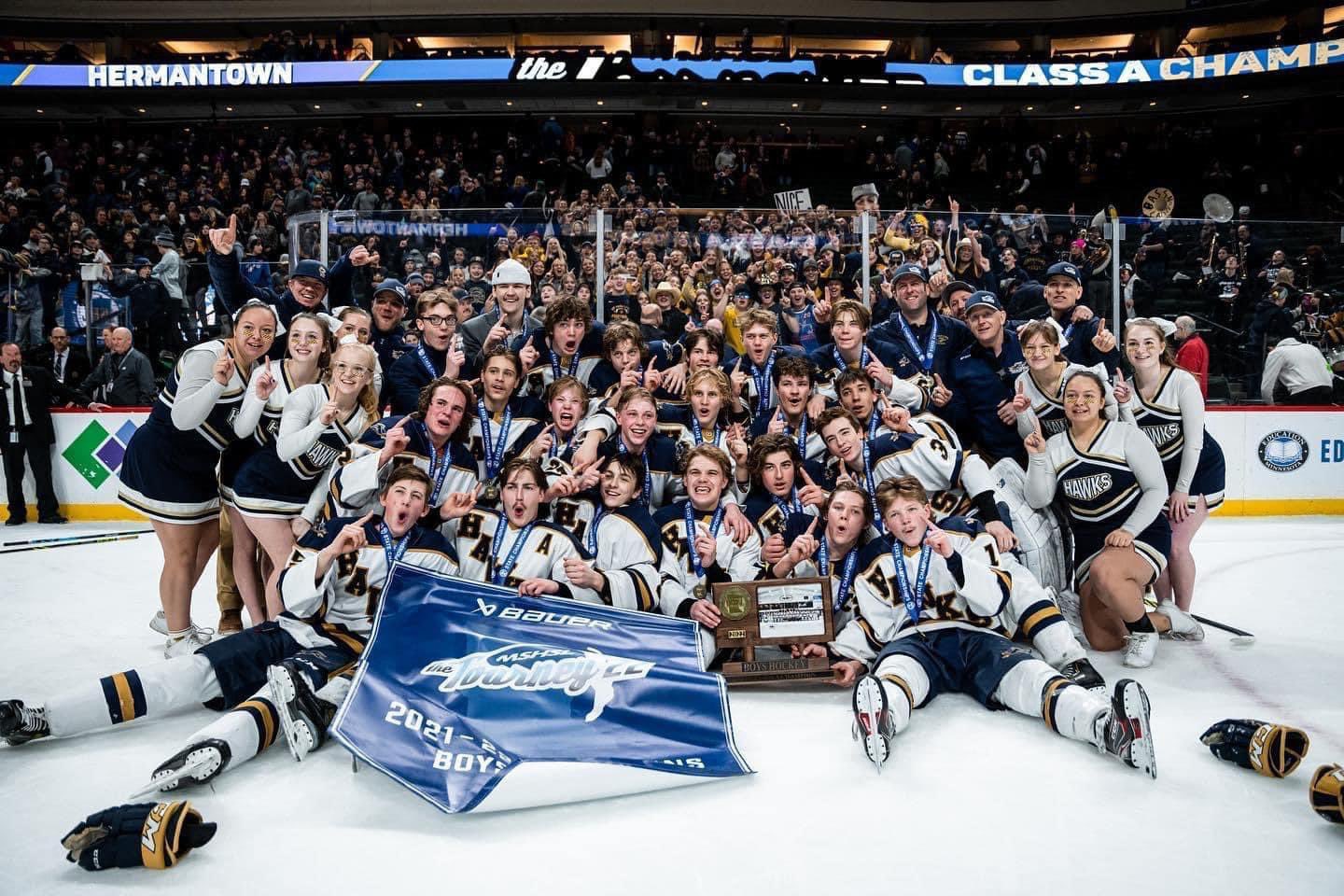 USA Hockey’s Red, White and Blue Hockey program aims to raise the level of creativity among players, keep them excited and engaged, and bolster their overall development.

The program’s main tenet is the integration of cross-ice practices and small-area games into youth hockey. Essentially, this means dividing the rink in half or in thirds and playing east-west, instead of the longer, full-length, north-south ice surface.

“I think cross-ice is incredible for player development because you’re getting so many puck touches and there are so many opportunities for contact, angling and turnovers,” said Patrick Andrews, boys’ hockey head coach at Hermantown High School. “It right-sizes the game. It forces you to use so much more skill because you’re in a tight, confined space.”

Like many coaches, from Mites all the way up to the National Hockey League, Andrews is a big believer in cross-ice play. In fact, he says it’s an almost daily part of the Hawks’ practice routine and helps his players reinforce skills, improve timing and grow their hockey IQ.

“One thing (former University of Minnesota Duluth coach) Mike Sertich used to say was ‘if you can’t play in a small space, how are you ever going to play in a big space?’” said Andrews, whose team captured the 2022 Class A State Championship last March. “I always took that to heart and wholeheartedly believe it. If you’re going full ice at a young age, you’re not having as many opportunities for failure and growth because you aren’t as involved. With cross-ice, you have to learn to make decisions quickly, how to use time and space, and really all the things that make a hockey player a hockey player.”

When Cross-Ice Comes to Life

Coaches love to see players take what they’ve learned in practice and use their newly found skills or knowledge to make an impact in games. Andrews has seen firsthand how cross-ice, small-area drills and games have improved his club.

“One of the cross-ice games we’ve been doing a lot of the last couple of years is a 2-on-2 angling game,” he said. “It starts with a puck dumped behind a net cross ice, and two guys have to retrieve it and two guys have to forecheck, but they’re angling into contact. We 100 percent see the benefits of that game play out in our games. You can see how much better our guys have gotten about puck support and angling, just by that one cross-ice game.”

“And we have examples across the board for every angling game we play,” Andrews added. “We play a power play game all the time, and you can see how the skills develop to create a 2-on-1 out of that game. It’s hugely beneficial.”

Watch any practice that includes cross-ice activity, and you’ll see that, because of the tighter space, literally everyone is involved, everyone is engaged, and everyone is active. It doesn’t matter if you’re a forward, a defenseman or a goaltender. And it limits the common occurrence, especially at the younger age levels, of the best skaters dominating possession time simply because they’re the best skaters.

“It’s absolutely beneficial for every single player to play cross-ice,” said Andrews. “It teaches the game of hockey, not how to play a certain position. It teaches how to angle, how to defend, how to backcheck, how to support. All those things are being constantly reinforced when the play is in a tight, confined area versus playing the entire length of the ice. For goalies, every time someone picks up a puck in a cross-ice game, they’re almost in a scoring opportunity. So, goalies have to be 100% engaged 100% of the time.”

Cross-Ice Drills Teams Can Use

Andrews said his team incorporates a variety of cross-ice and small-area games into their regimen that enhance skills in the areas of transitions, breakouts, forecheck, power play and more. Another added benefit? “It cranks up everything,” he says.

"One of the biggest things you want out of your players as a coach is energy, and small-area games give you that," Andrews said. "And, if you structure the games correctly, you’re reinforcing puck touches, skill development and the concepts you want to teach. This should be encouraged at every level."

Andrews shared three cross-ice games that any team can integrate into their practices:

As a firm believer in cross-ice hockey, Andrews can speak firsthand to the impact it has made on his program and community, both in terms of development and engagement.

“Cross-ice forces you to be creative, as you’re in different positions, facing a different set of problems with different opportunities to try to solve them,” he said. “But I also think that with cross-ice, the players have more fun. For our youth association, we put in three cross-ice-sized rinks (called “Ice Mite Rinks”), and those rinks are constantly full now. Even the older high school kids go to those rinks because it’s way more engaging. You’re constantly involved in the game, and there are more opportunities to get puck touches, make moves and have fun. Especially in January, when you get in the doldrums a little bit, we try to start every practice with a small-area game as a warmup. It instantly ramps up the intensity and the compete level and gets guys going.”