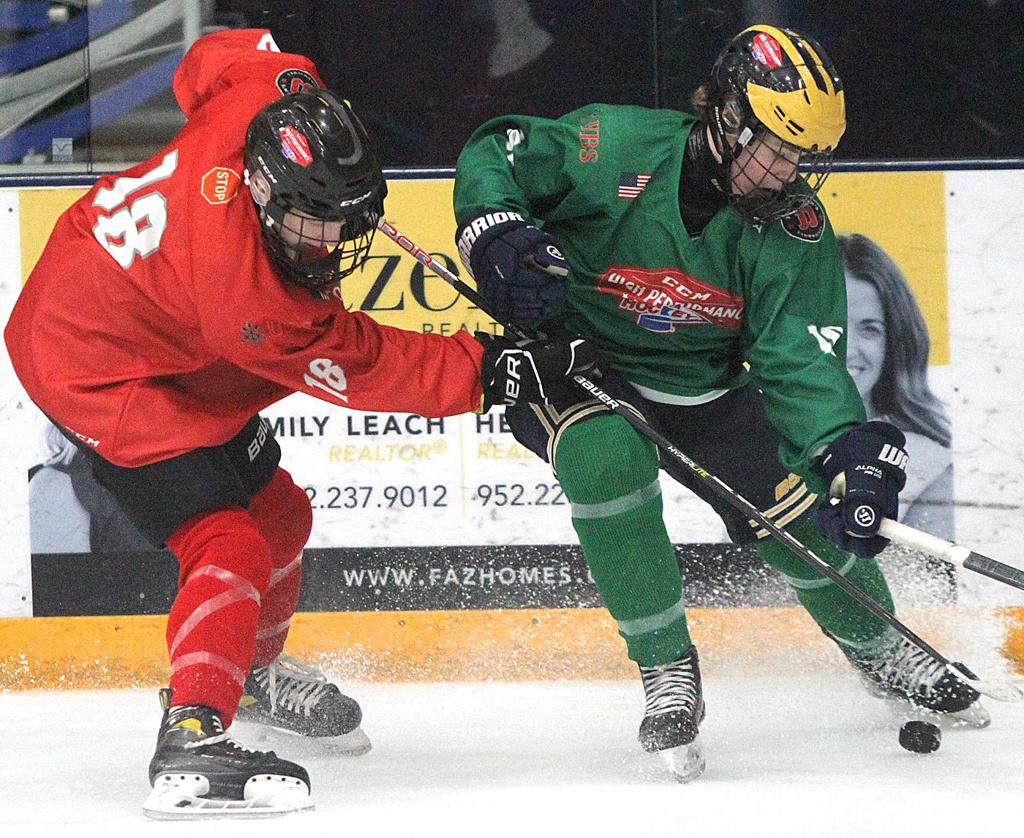 The teams from the northland provided a competitive fight in the Friday night finale as the Gold shirts from Section 8A/AA skated to a 3-1 victory over Section 7A/A (White).

Three goals came within a 90-second span in the opening half, and Darik Olson (Duluth Marshall) score the eventual game-winner with 8:41 yet to go in the first period to put ahead for good the Gold team representing the northeast part of the state.

Josh Kauppinen (Hermantown) opened the scoring less than 10 minutes into the game, and later added an assist to lead the way with two points.

Ryan Kerr (Grand Rapids) and Andrew Rayelts (Proctor) manned the crease in the win for Gold and stopped 13 of 14 shots combined.

Section 7 advances to face the Section 1A/AA Saturday afternoon. The Red squad from 1AA, the southern most part of the state, defeated 3A/AA (Green) to reach the semifinal on the other side of the bracket.

Section 2A/AA (Orange) scored three times in the second half and opened up the festival with a 3-1 victory over Section 4A/AA (Royal Blue) Friday afternoon at Plymouth Ice Center.

Henry Davis (Minneapolis) broke the scoreless stalemate with 9:20 remaining, the goal assisted by Trey Dionne (Jr. Gamblers). David Baer (Minnetonka) added another about six minutes later as Orange controlled the play for long stretches in the second half.

With the clock winding down, Max Egan (Mahtomedi) ended the shutout bid to pull the Blue team to within a goal at 1-1 with 2:05 to play, before Section 2 nabbed an empty-netter in the final minute when Cameron Dean (Holy Family) knocked in a shot from just inside the blue line.

Caleb Heil (Sioux Falls Power) and Kam Hendrickson (Holy Family) combined for the victory in the crease with 15 saves between the two of them.

Section 6A/AA doled out a steady stream of speed to pressure, than put away the Sky Blue squad from Section 5A/AA and pocket a 6-1 quarterfinal victory Friday afternoon at PIC.

The Gray jerseys from the west metro scored five second half goals, and had six different skaters contribute in lighting the lamp. A pair from Wayzata helped lead the way as Jack Hartle scored goal and added two assists to lead the way with three points to start the festival in fine form, as did Brittan Alstead, who finsiehd with a goal and a helper. Matt Mullman from Edina contributed two assists to make it three with multiple points amongst the 10 who would make their mark on the score sheet from Section 6.

Matt McElroy (Benilde-St. Margaret’s) stopped 11 of 12 shots he faced from Sky Blue, and Josh Middleton (St. Louis Park) made seven saves on eight shots to team up for the victory between the pipes for Section 6.

The Grays advance along the bracket to face their geographical rivals from Section 2A/AA in the semifinals Saturday afternoon.

The state’s southernmost team bookended the opening half with a pair of goals, with a pair mixed in somewhere in between to slip into the driver’s seat for good as the Red shirts from 1A/AA put away Green 3A/AA via 6-4 final.

Jackson Ernst (Lakeville South) notched the playmaker with three assists, and added a _ half goal to lead the way for Red with four points. Cooper Jacobson (Dodge County) scored two crucial goals for the Reds in the final minute of the first half, the second of which came on the powerplay with 11 seconds left, and eventually stood up as the game-winner.

The Greens from 3A/AA, comprised mostly of programs from the southeast metro, got scoring from Jordan Brothers (Eastview), Owen Durigan (Rosemount) and Austin Uecker (New Ulm).