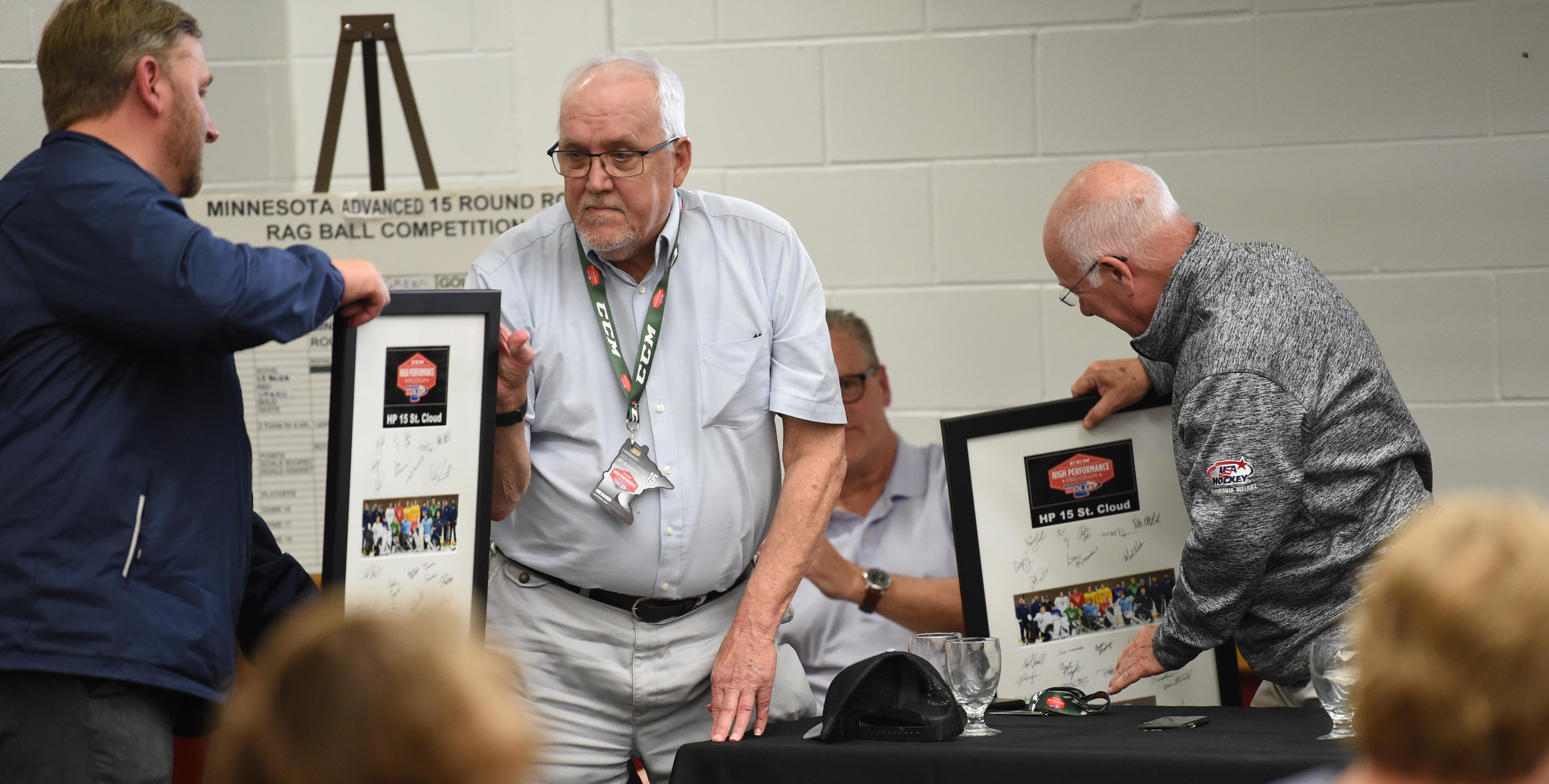 Goaltender coaches Bob Rajanen, left, and Steve Houge were honored Wednesday for having each worked at the Development Camp for 26 years. Photo by Loren Nelson, LegacyHockeyPhotography.com

Goalie coaches Bob Rajanen and Steve Houge, each in their 26th year at the CCM Minnesota Hockey Summer Development Camp, were honored on Wednesday night at dinner.

Rajanen, the former head boys' hockey coach at Red Wing, and Houge, who serves as a goalie coach at St. Paul Johnson, each received a pair of plaques featuring photos of them working at the camp and in a group with all of this year's goaltenders and goalie coaches.

Also at dinner on Wednesday, Hamline University men's hockey coach Cory Laylin spoke to the group, asking players to consider, "What is going to be your finish line?" and "What are you going to give back to the game?"

Laylin is a St. Cloud native who played for the University of Minnesota and had a long professional career, mostly in Europe.

Hans Skulstad of the Center for Sports and the Mind made a return appearance at camp, talking to players about topics such as "Learn how to to be comfortable with being uncomfortable" as part of his continuing Raising Your Game sessions. 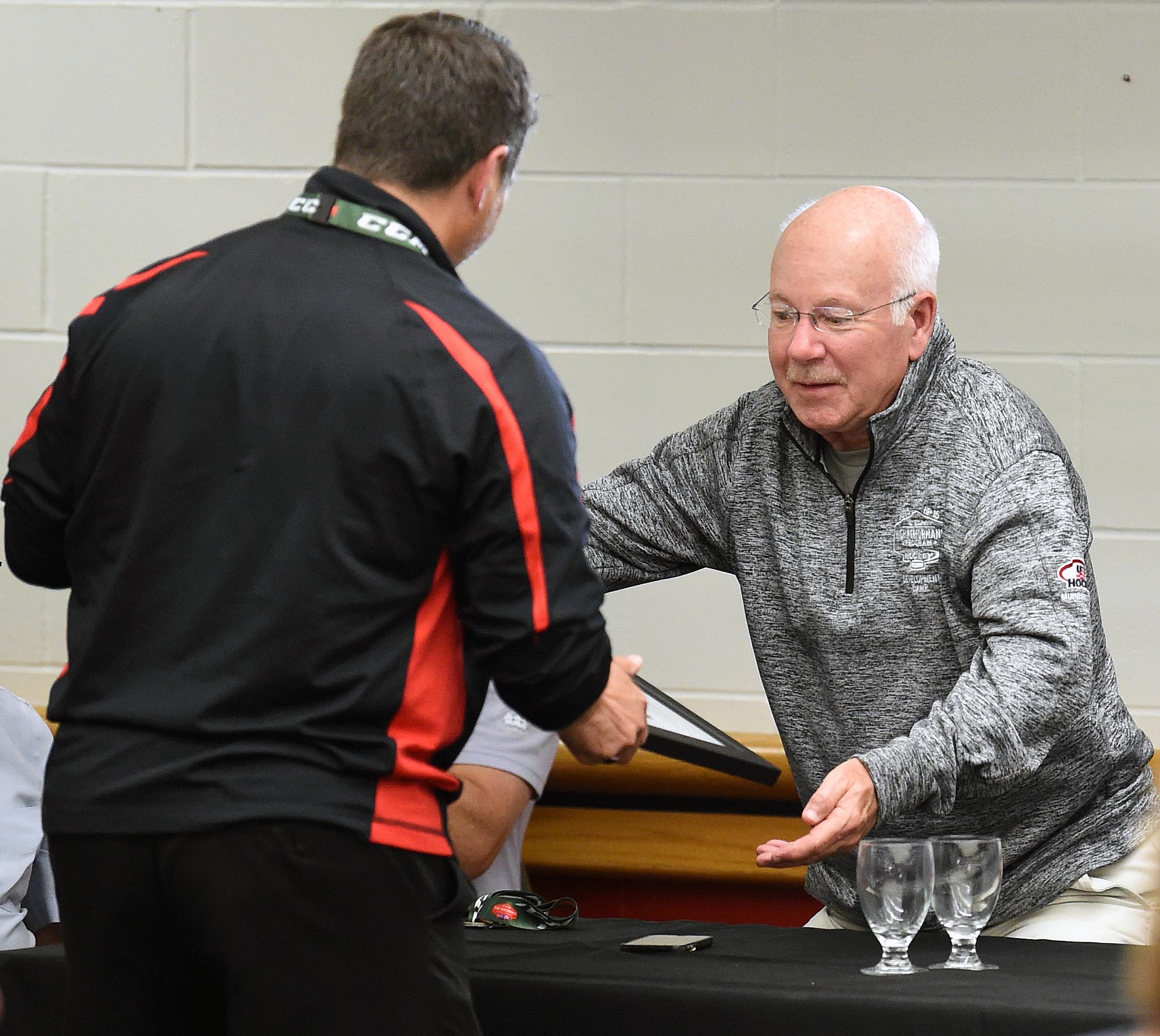 Ziemer's goals were his eighth and ninth of the camp and Mann has six assists among his nine points.

The scored was tied at 2-2 at halftime, but Royal Blue broke away by scoring three times in a span of 2 minutes. Joshua Kauppinen (Hermantown), Mann and Ziemer were the goal scorers. 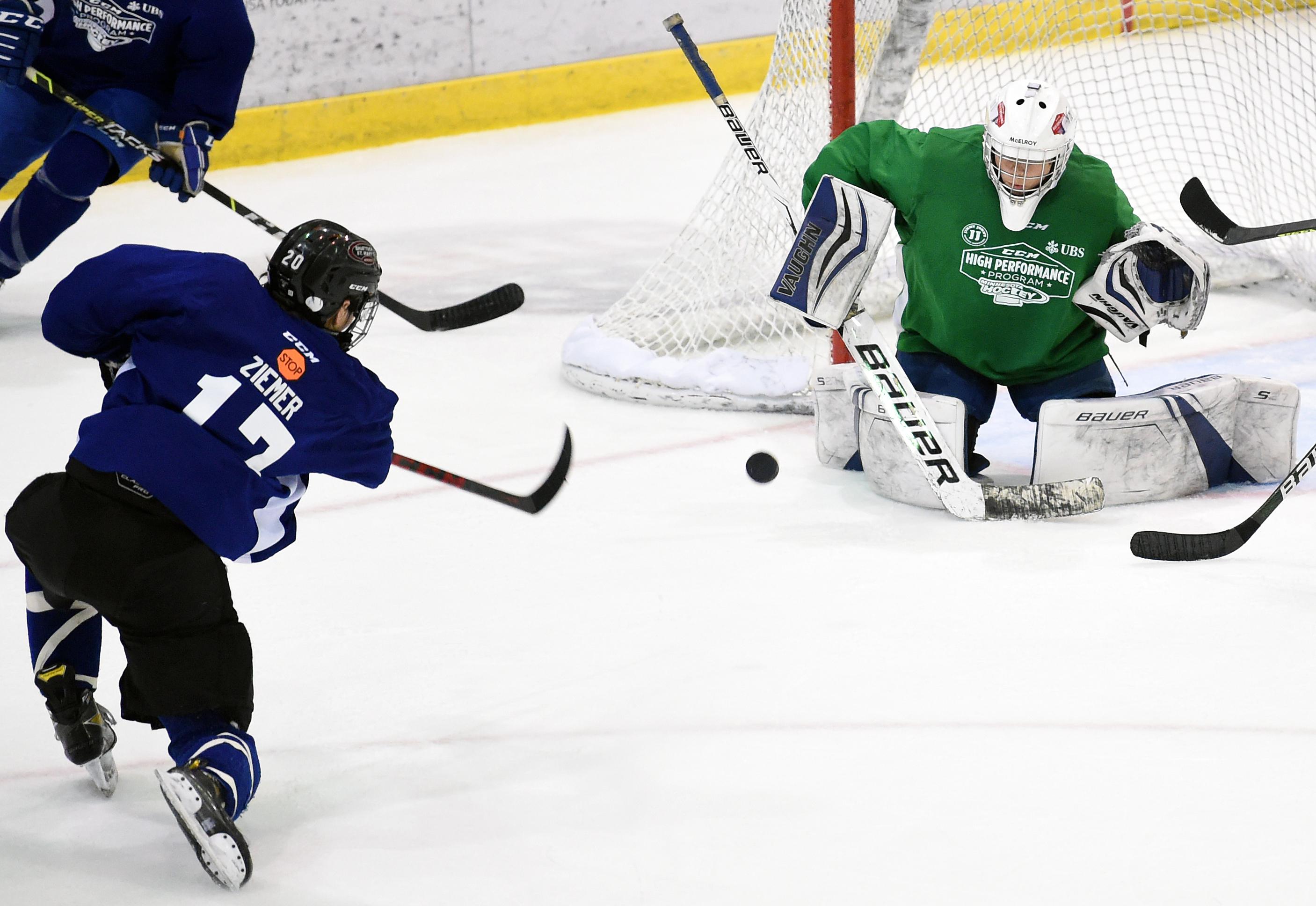 Caleb Heil (Chaska/Chanhassen) and Josh Middleton (St. Louis Park) combined on a 35-save shutout as Light Blue rolled past White to improve its record to 3-2 record.

Henry Lechner (Bloomington Jefferson) had a goal and an assist for Light Blue.

White is also 3-2 heading into Thursday's round of playoffs. 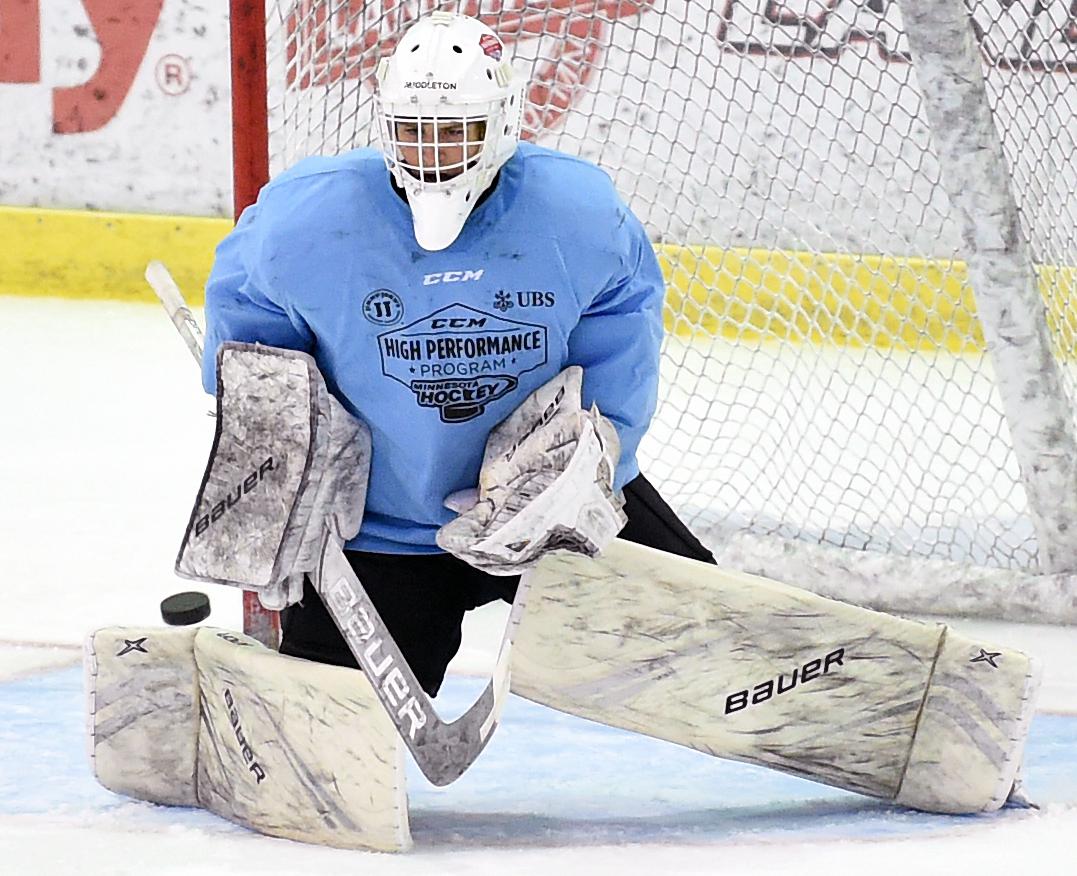 The last round of camp night games ended with Red beating Gold behind two goals from Boden Sampair (Mahtomedi).

The Game was played in front of a raucous crowd as the 14s in attendance sided with Red while the 15s with Gold.

Gold got goals from Grady Magner (East Grand Forks) and Ashton Schultz (Chaska/Chanhassen) as it took a 2-1 lead. 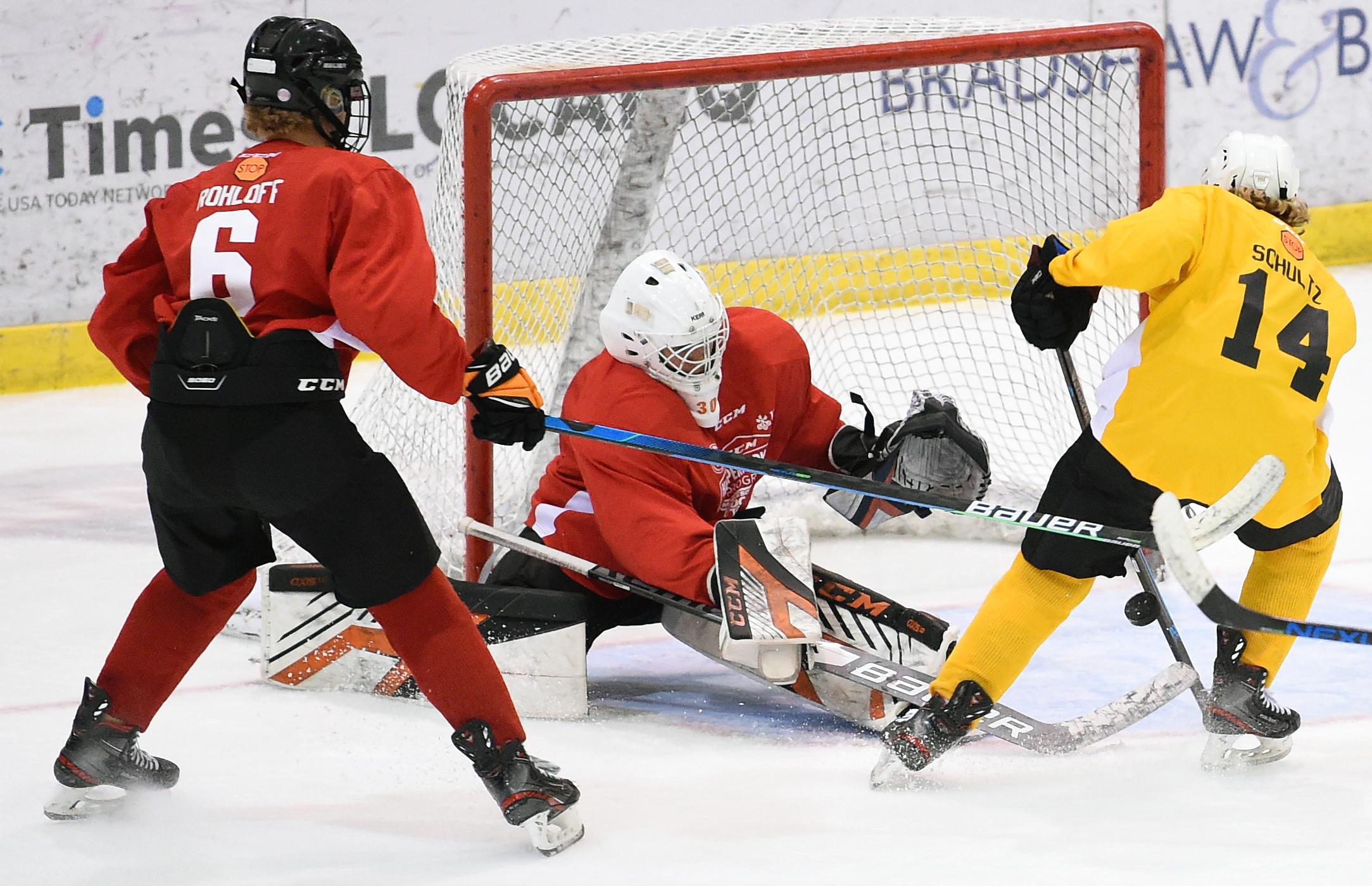