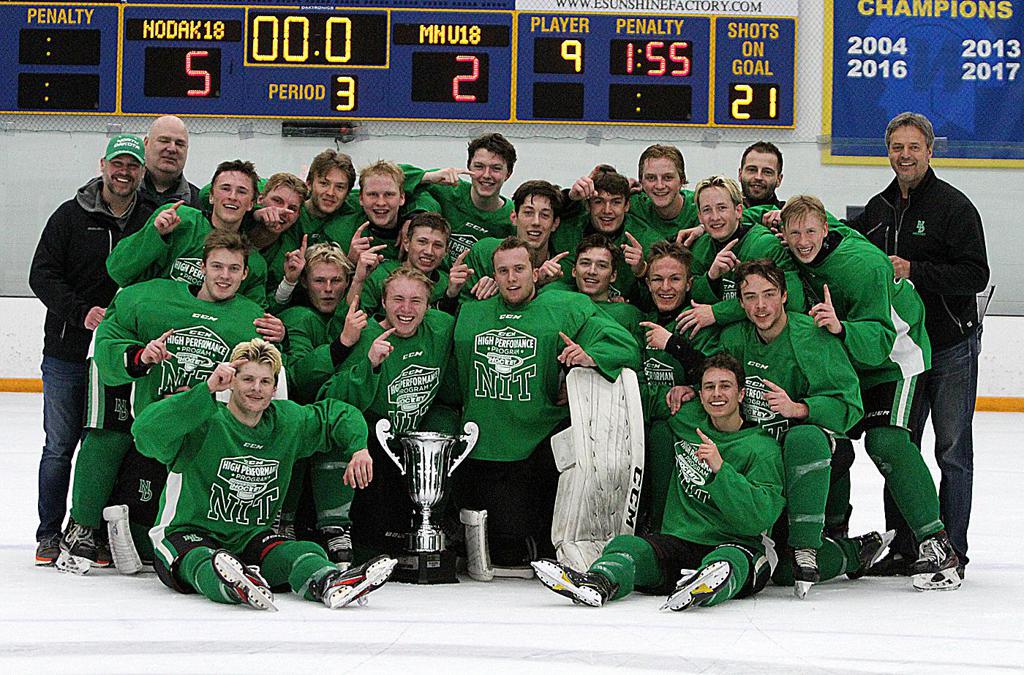 Team North Dakota poses for a group photo after accepting the Trophy for the NIT champions for 2021. The team won a game convincingly for four straight days, and finished with a 5-2 victory over the Minnesota 18s Sunday afternoon at Plymouth Ice Center. 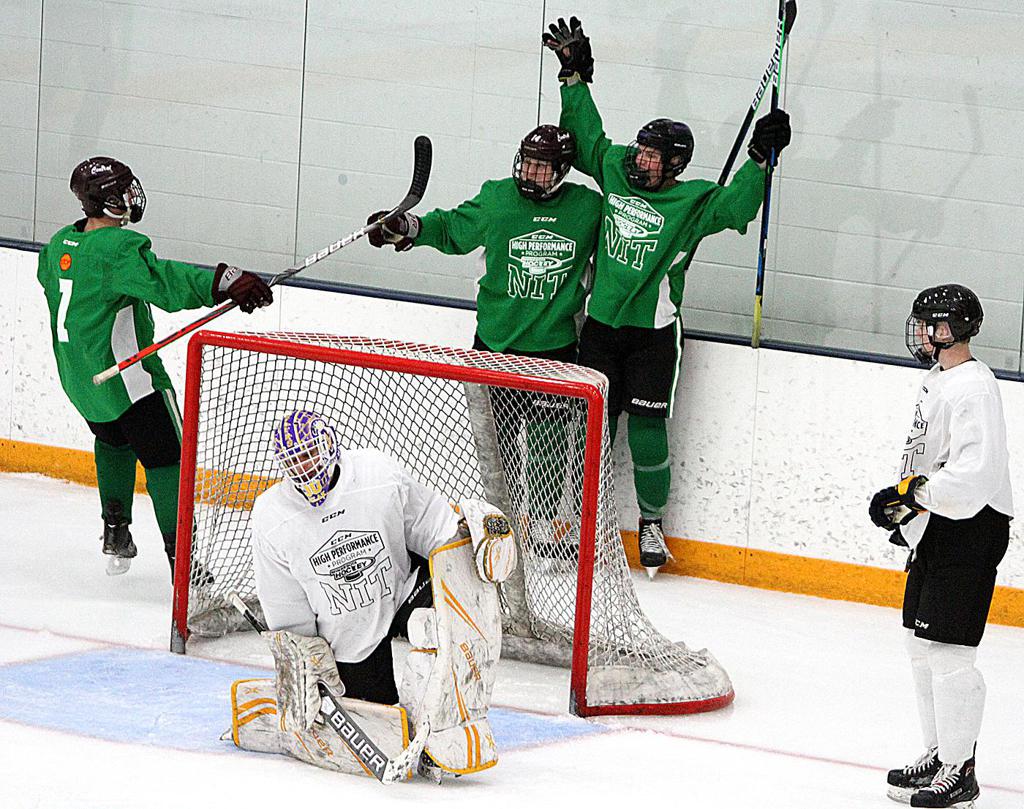 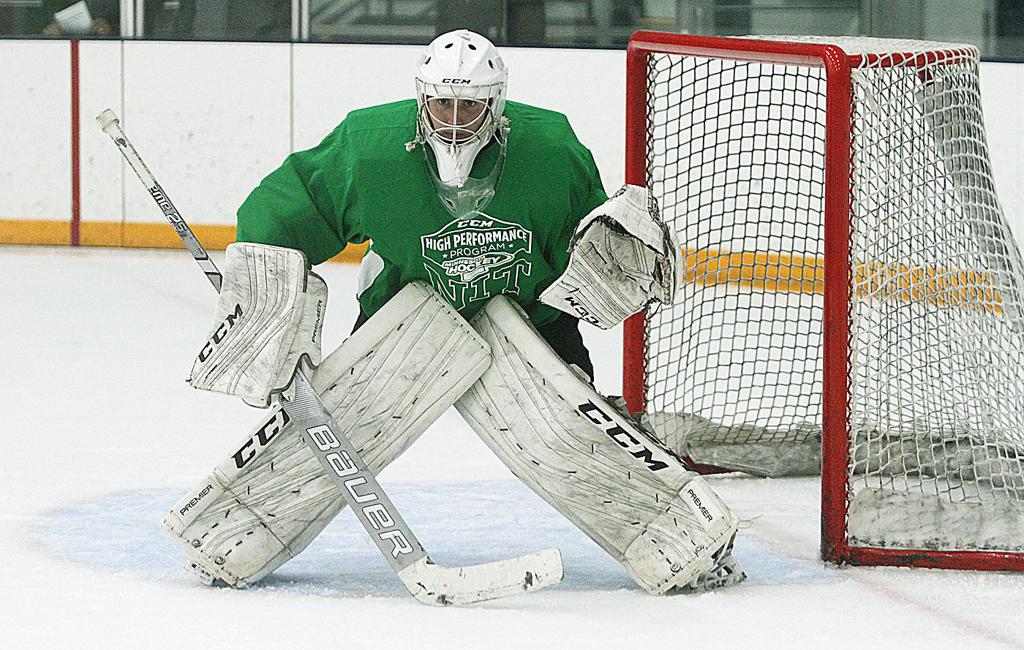 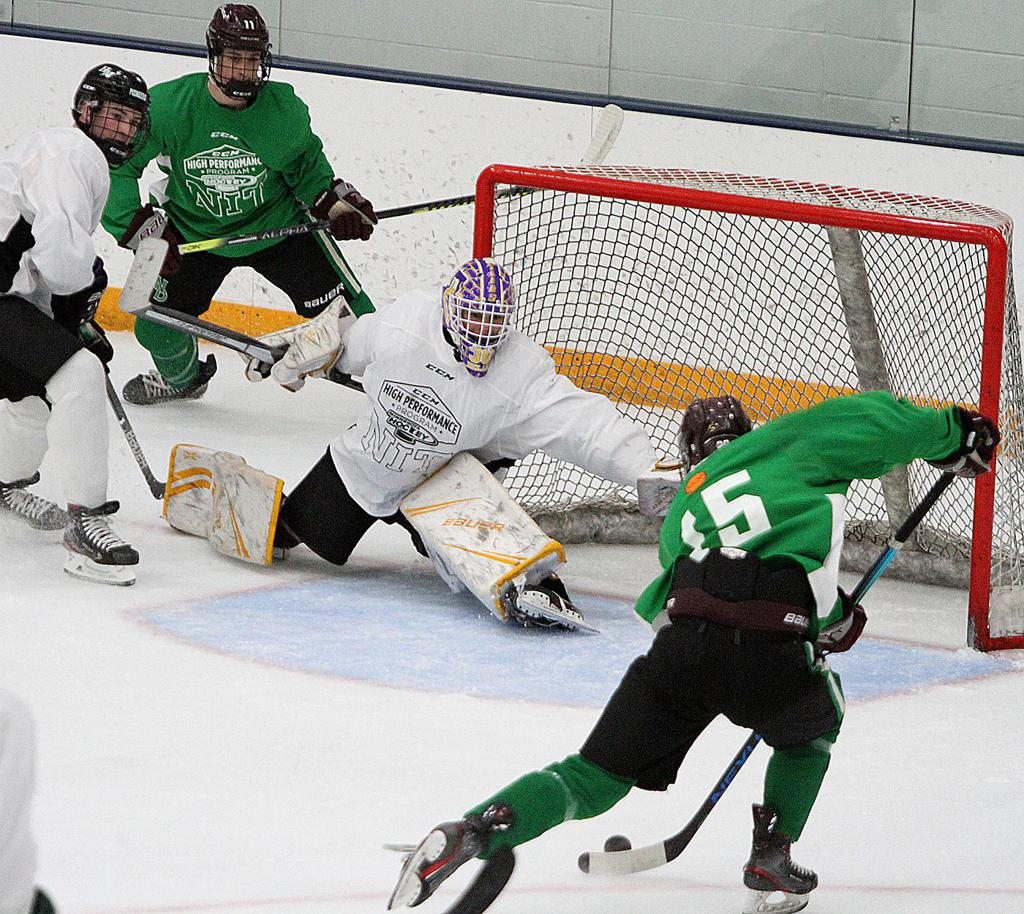 The 5-2 final barely ever seemed in doubt as North Dakota struck three times in the first period, and put a halt to what had been a series of outstanding performances by the White jerseys-ed Minnesota 18s. North Dakota used puck possession, and zone control to dictate most of the early  part of the game, and rode long crisp passing to weapons placed just outside the opposing blue line. Chances rose from those opportunities and North Dakota cashed in.

Joseph Kennelly, a senior from Grand Forks Central, pieced together a hat trick with two goals in the first period, and one in the second to help drive the Green Machine to a lead they would hold.

Fellow Grand Forks Central teammate Braden Panzer finished as points leader with 10…two goals and eight assists,. Kennelly finished with the most goals (6-1-7), and Chase Spicer, another Knight finished with seven points (1-6-7). The three are a group of nine players from GF Central, and 12 overall from the city.

Zack Sandy. a senior from Fargo South/Shanley, was best between the pipes this weekend, posting a 1.38 GAA and a .941 save percentage that was six points behind Dylan Eliason from the Michigan 18s. North Dakota’s other goaltender Logan Hendrickson (Bismarck) was top four with stats of 2.73 GAA and .902 save percent.

As a team, North Dakota finished with the best goals for (22) and against (8) differential as well, giving them a tourney best plus-14.   -- Drew Herron 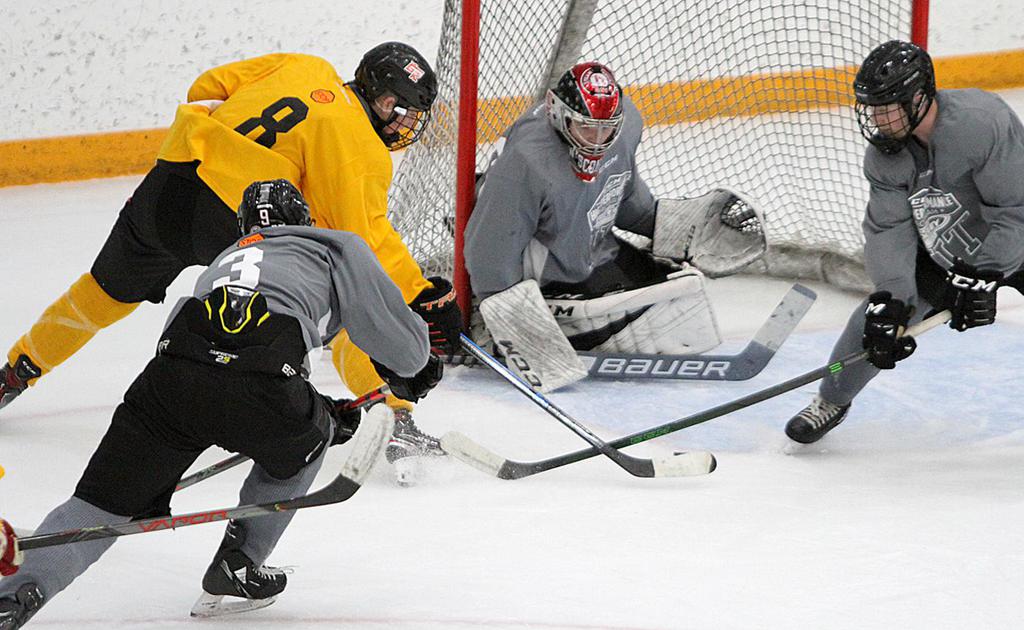 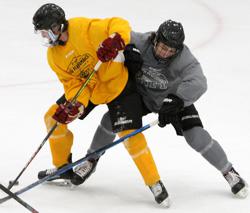 The Minnesota Seniors closed out the weekend with a hard-fought victory over the Wisconsin seniors Sunday morning at Plymouth Ice Center, sewing up a third place finish with a third win in four days for the Golden-jersey squad.

Luke Delzer (Totino-Grace) added a goal and an assist, as did Cam Boche (Lakeville South) and Sullivan Schulle (Chaska), while six different goal scorers had a part in the good fortune earned early in the third with a stretch of three unsabered goal.

Wisconsin struck first with Nick Johnson (Sun Prairie) and last in the period with Boone Mathieson (Tomah) to take a 2-2 tie into the second period, then did the same in the third—by Brady Welsch (St. Mary’s Springs) and Mathieson again — but took a 4-3 lead into the third.

From there, Boche scored short-handed, and Schulle followed by Erik Larsen (Northern Lakes), and the Minnesota Seniors built a lead that would weather a Wisconsin Seniors squad that would not back down quietly. Joe Kelly (Eau Claire Memorial) sored midway through the period to pull Wisconsin within one score, though the Gold squad would hold on tight the rest of the way, dropping the Grays to 2-2 for the weekend, despite a plus-7 goals differential. 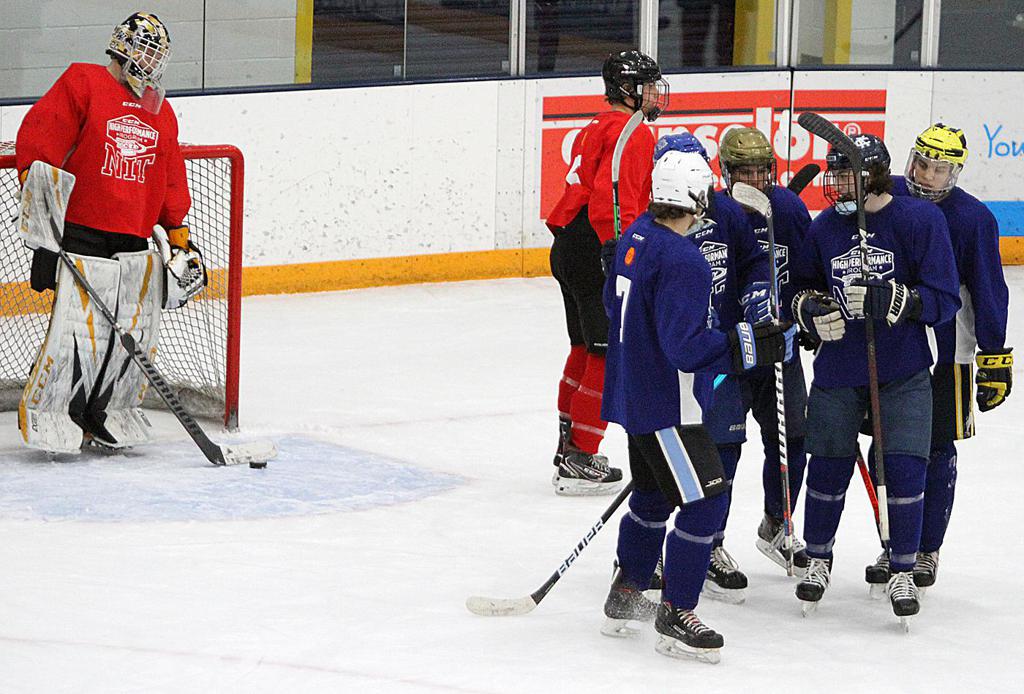 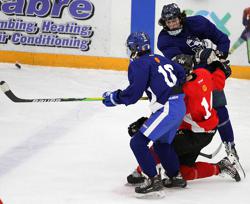 The Michigan Seniors pieced together three solid periods to push aside the Wisconsin 18s and capture 5th place Sunday morning with a 7-3 victory.

Owen DeVries (Rockford) got the scoring started for the Michigan Seniors a little more than seven minutes in, and Dean Loukus (Calumet) followed a short time later, scoring the first of his two goals for the game and forcing the Wisconsin 18s to chase the rest of the way.

A total of 13 different skaters would put their mark on the score sheet, though only Loukus and Austin Salani  (Hancock) — with a goal and an assist— would finish with more than one point.

In goal, Ryan Piros (Hartland) played all three periods and turned aside 29 of 32 shots he faced.

Michigan Seniors finished the weekend with a 2-2 record, while Wisconsin 18s fell to 0-4.  -- Drew Herron 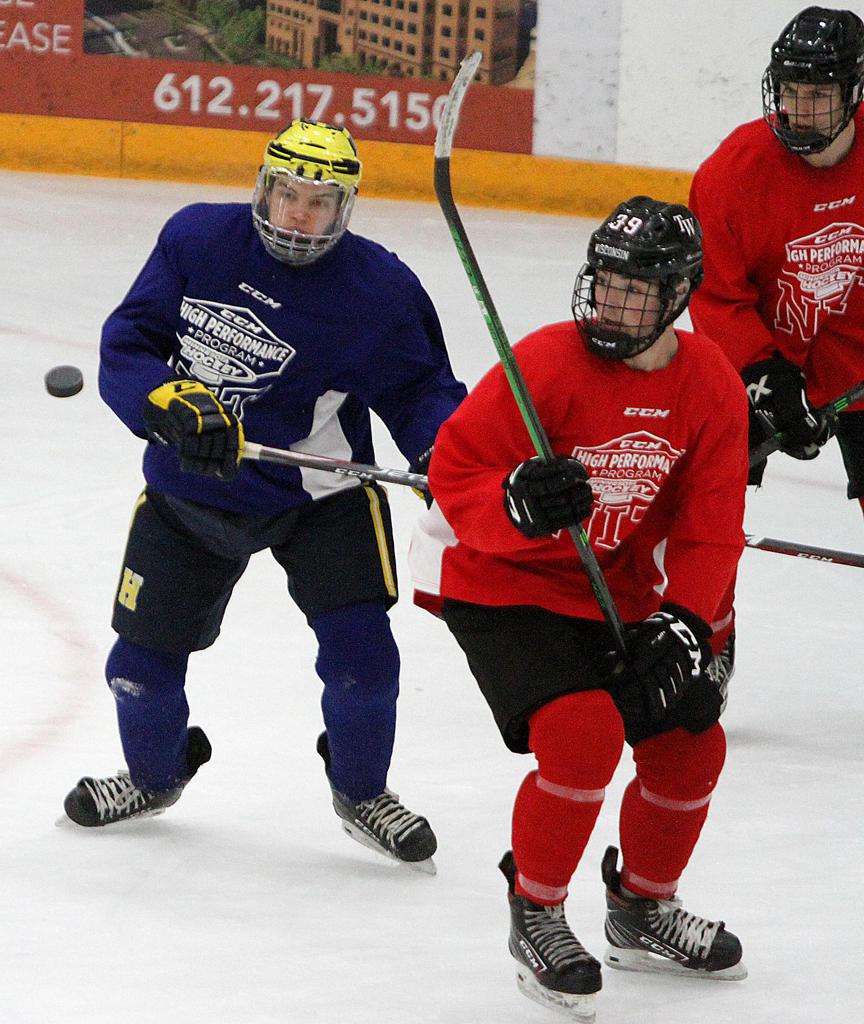 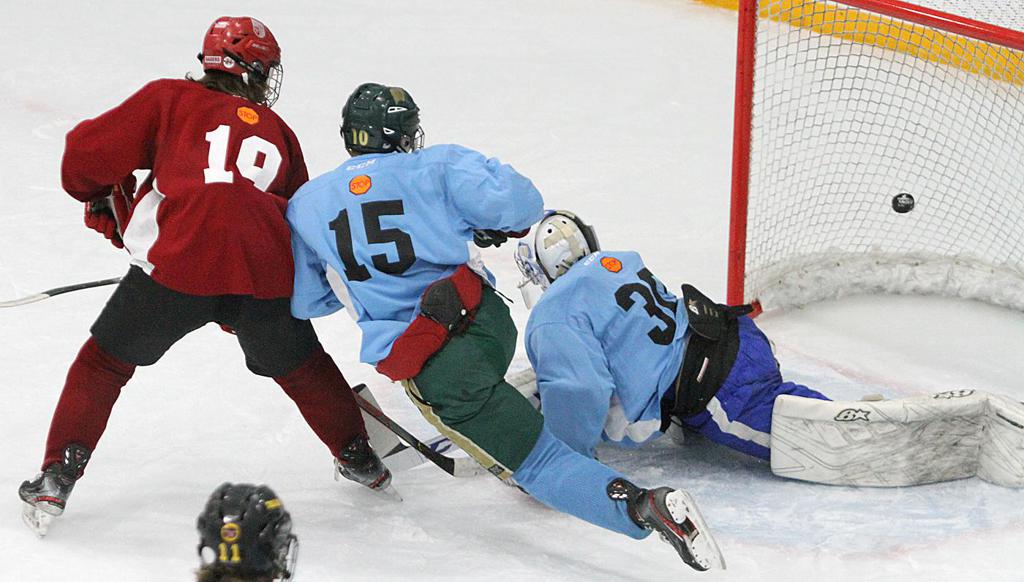 Colorado earned its first win of the weekend with a shootout victory over the Michigan 18s Sunday morning at Plymouth Ice Center.

Knotted a 2-2 after regulation and with a goal apiece into the final round of the shootout, Riley Hunt Bahn (Cherry Creek)’s patient snapshot would hit the back of the iron, and ensure the Maroon jerseys would leave town on a high note.

Colorado came out flying in the first period, outshooting the Michigan 18s 13-7 in the opening 18 minutes, and staking a 1-0 lead. Sean Holloway (Regis Jesuit) converted one of three major scoring chances he generated to put Colorado on solid footing from the go.

The second period was a different story, as Michigan became more efficient with its puck movement and breakout, which lead to the majority of the period spent in the Colorado zone, and a 16-5 shot differential in the second period.

Michigan tied the game 6:57 into the second on a goal by Will Dawson (Traverse City Central), set up by Everett Pietila (Howell) and Michael Schemerhorn (Traverse City West).

Colorado would answer a little more than a minute later to reclaim the lead on an unassisted goal by Jake McCall (Valor Christian).

In the shootout, both teams would net one before Hunt Bahn converted to stake the Colorado victory. 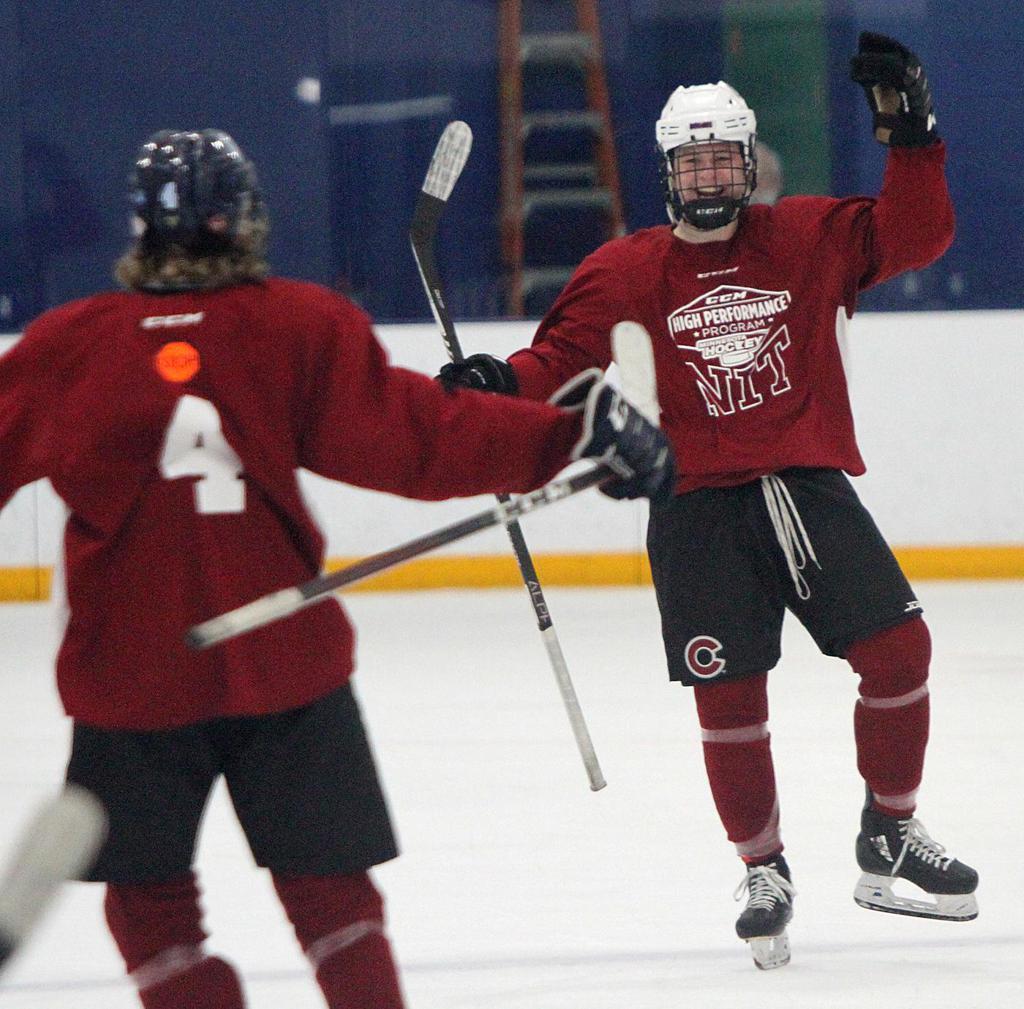 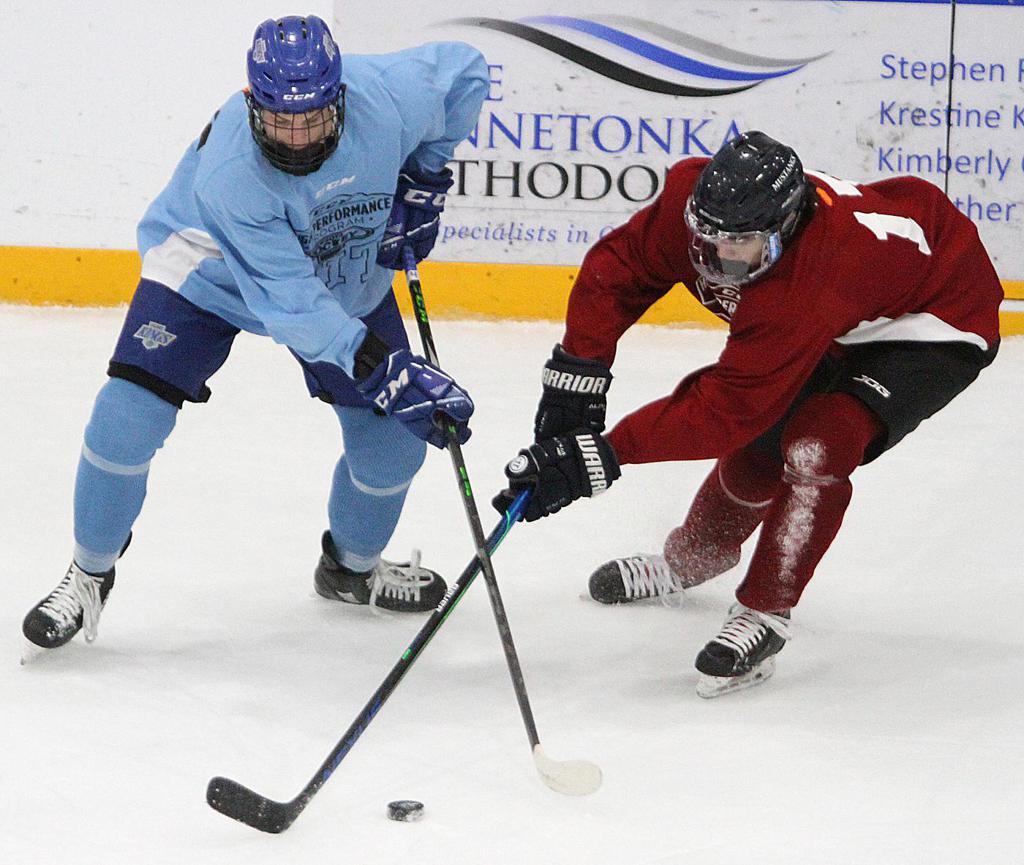