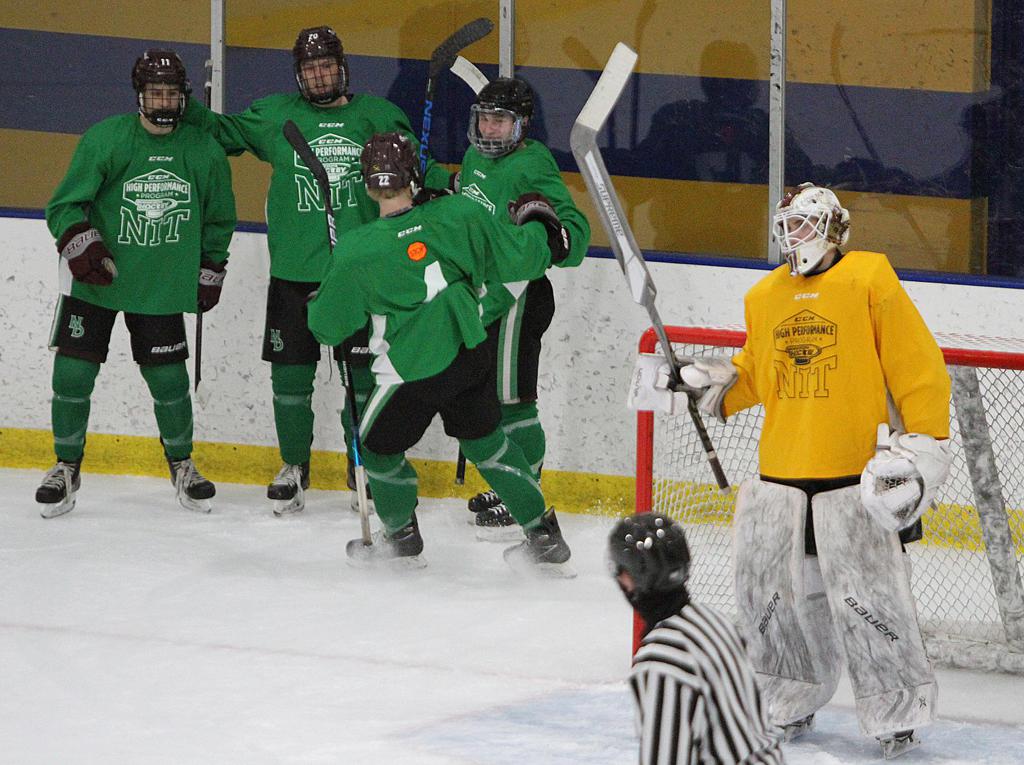 North Dakota made short work of the Minnesota Seniors Friday night with a 7-2 victory that moves their record to 2-0 and their goals differential to 11-3. Braden Panzer (far right) leads the team with four points in two games. Photo by Drew Herron 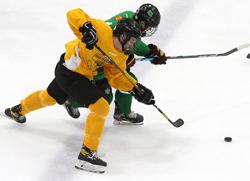 Seven different skaters would record at least one point, four of whom would finish with multi-point efforts as the Green jerseys’ move their record to 2-0 and maintain firm control atop Pool A entering Saturday. On the heels of Friday night’s win, North Dakota has the greatest goal differential at 11 for to 3 allowed.

With two goals and two assists in two games. Panzer sits in a three-way tie atop the leaderboard for points.

Logan Hendrickson (Bismarck) manned the crease for three periods and turned aside 17 of the 19 shots he faced. 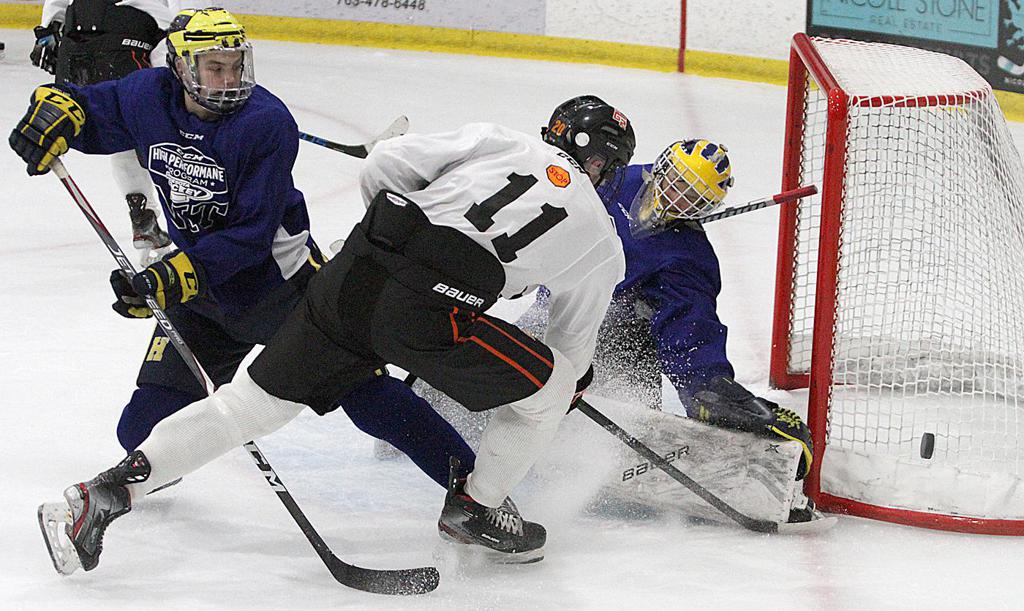 Minnesota 18s turn it on late to bury Michigan Seniors, move record to 2-0 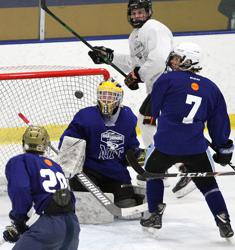 The Minnesota 18 brought long periods sustained pressure, and would thrive on transition to create scoring chances in putting forth a cogent 4-1 victory over the Michigan Seniors Friday evening at Plymouth Ice Center.

Minnesota 18s scrappy performance clogged the ice and deprived Michigan SRs of valuable real estate as the White jerseys soared to victory, the team’s second in as many nights.

Michigan would open the scoring nearly midway through the opening period on a goal by Carson Korte (Rockford), and set up by Isaac Cheli (Cranbrook Kingswood) and Leyton Stenman (Cranbrook Kingswood). They would take their lead into the second period, but it proved short lived from there.

Alex Bump (Prior Lake) and Joe Delgreco (Grand Rapids) would score in the latter half of the period, with Delgreco’s equalizer assisted by Axel Begley with 1:45 left in the second.

In the third, Minnesota 18s got cooking again, first with a goal on a nifty feed from behind the net on a pass sent by Luke Jech (Lakeville North) and put home by Drew Fischer (Cretin Derham-Hall). For good measure, Bump added another score on a nice cross-ice feed from Max Strand (Roseau), and the White jerseys were in charge for good.

In net, Marko Belak (Cretin-Derham Hall) and Croix Kochendorfer (East Ridge) combined to turn aside 29 of the 30 shots Michigan SRs threw at them.

At the other end, Ryan Prios (Hartland) went the distance, and made 34 saves on 38 shots.  — Drew Herron

Outshot by not outdone, Michigan 18s take down Wisconsin 18s 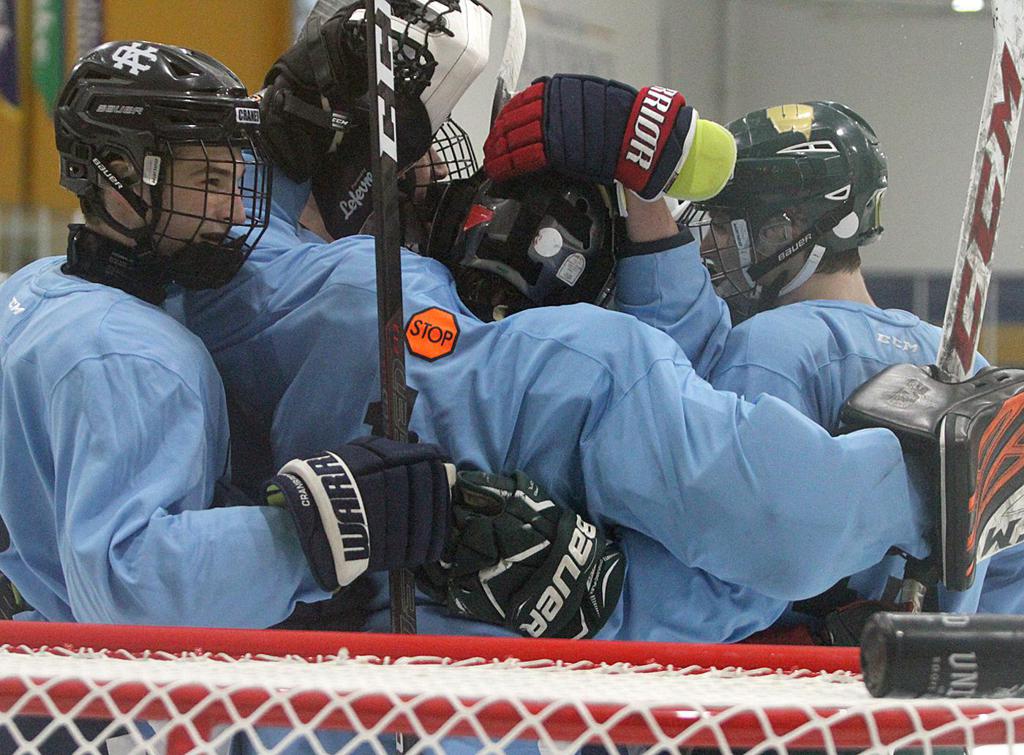 The Wisconsin 18s struck first and poured on more shots, but it was the Michigan 18s who had the last laugh by capturing a 5-2 victory Friday afternoon at Plymouth Ice Center.

The Michigan 18s improve their record to 1-1 for the tournament as they fight for seeding in the competitive Pool A.

Wisconsin, despite their scrappiness, speed and grit, dropped to 0-2 for the weekend after outshooting their opponents 34-21.

Welsch assisted on Wisconsin SRs first goal put home by John Christen (Tomah) late in the first period, and the Gray squad built from there. Beginning the second period shorthanded, Mason Manglitz (Onalaska) forced a turnover just over the blue line, then raced in to score with a well-placed forehand just over the blocker to push Wisconsin ahead 2-0.

Welsch would score his first late in the second period, and added his second goal late in the third as Wisconsin held firm command of the game for three periods.

Ian Hedican (Madison West) and Kaden Grant (Verona Area) would combine in net for the shutout, each stopping nine shots. 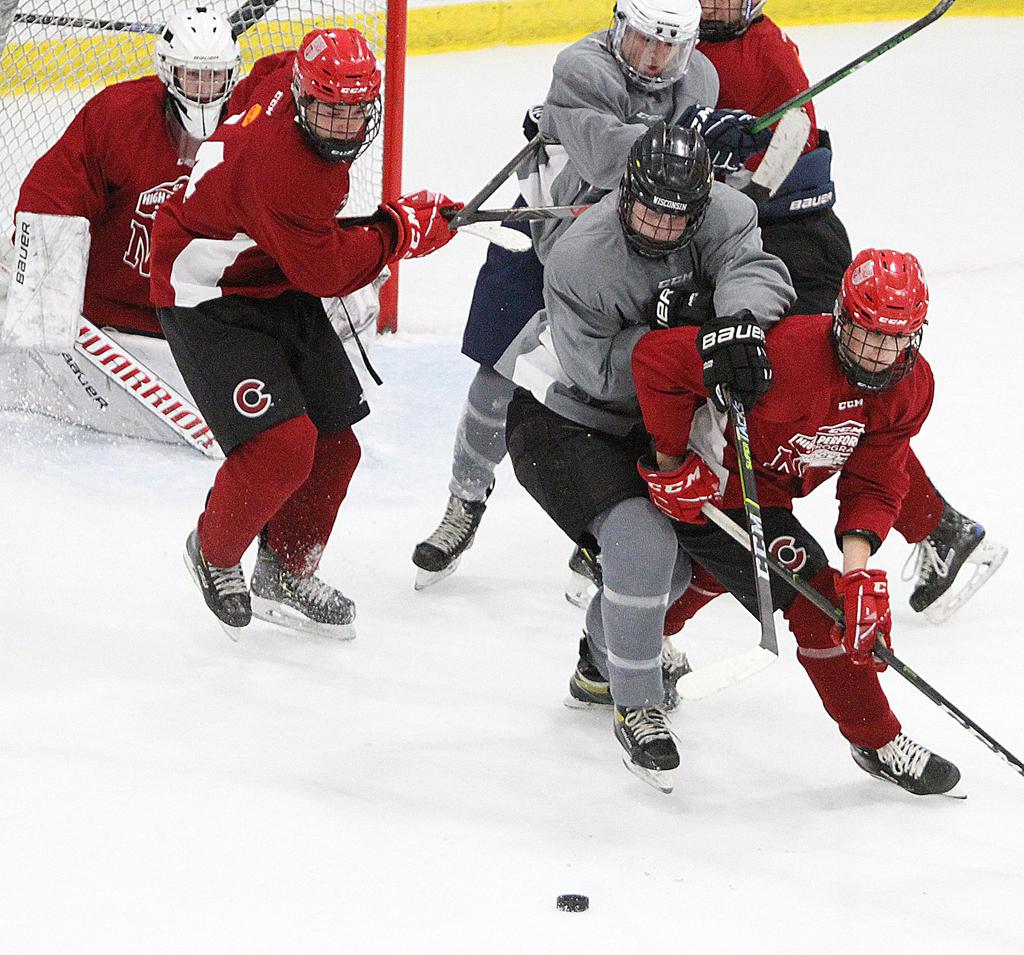 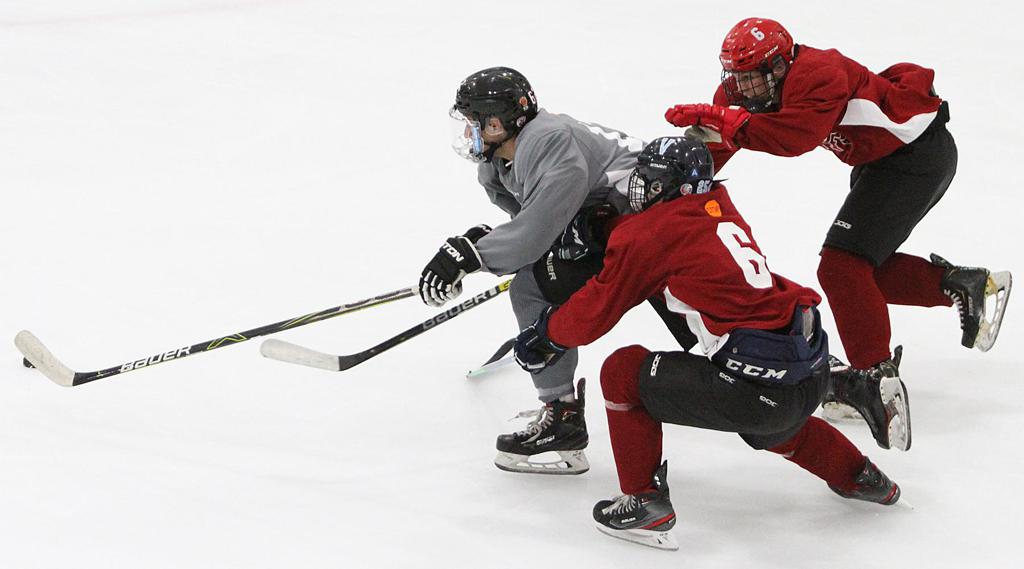