B17 Day 3:White squad from Section 8 rolls through another day to finish on top

The HP 17s from Section 8 dominated its way though the spring festival that wrapped up Sunday at Plymouth Ice Center with the type of style that those from the northland endear.

A heavy game, a hard-forecheck, winning puck battles, moving in space and creative passing on a consistent basis is what set them apart.
The White jersey-ed team from the state’s northwest quadrant ran its way through handy wins Friday and Saturday, then capped the championship with a 3-0 over Orange (2A/AA) on Rink C in Sunday’s climax.

OFFENSE
Moorhead Spuds Thomas Schroeder and Carson Triggs each added a goal and an assist, while Sam Ranallo (Rogers) authored another, marking his fourth in the three-game tournament. Adding an assist was Jaksen Panzer (East Grand Forks), whom finished with a festival best nine points (4-5-9). It’s two more than teammate  Triggs and Landen Gunderson (Maple Grove), each with seven points.

TEAM OFFENSE
White finished with 22 goals in three games, four greater than the closest Gold (7A/AA) with 18, and twice as great as anyone else.

GOALTENDING
In net against Orange 2A/AA, Brett Holmer was a perfect in 14 shots he faced, as was Austin Dietrich whom stopped 18 shots in the first half. Holmer finished with the tourney-best in save-percentage (.966), goals-against-average (1.33), and recorded the second most saves (56). That’s two behind the top, with 60 saves recorded by SkyBlue 5A/AA’s Ryan Wallin (Blaine). 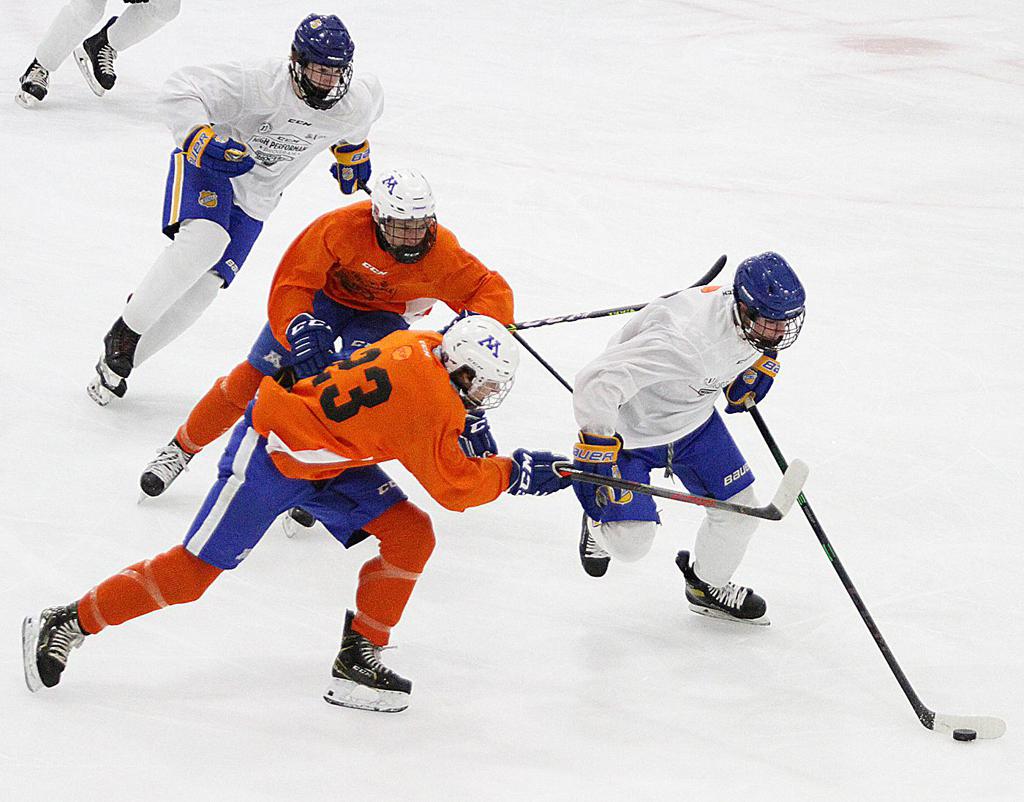 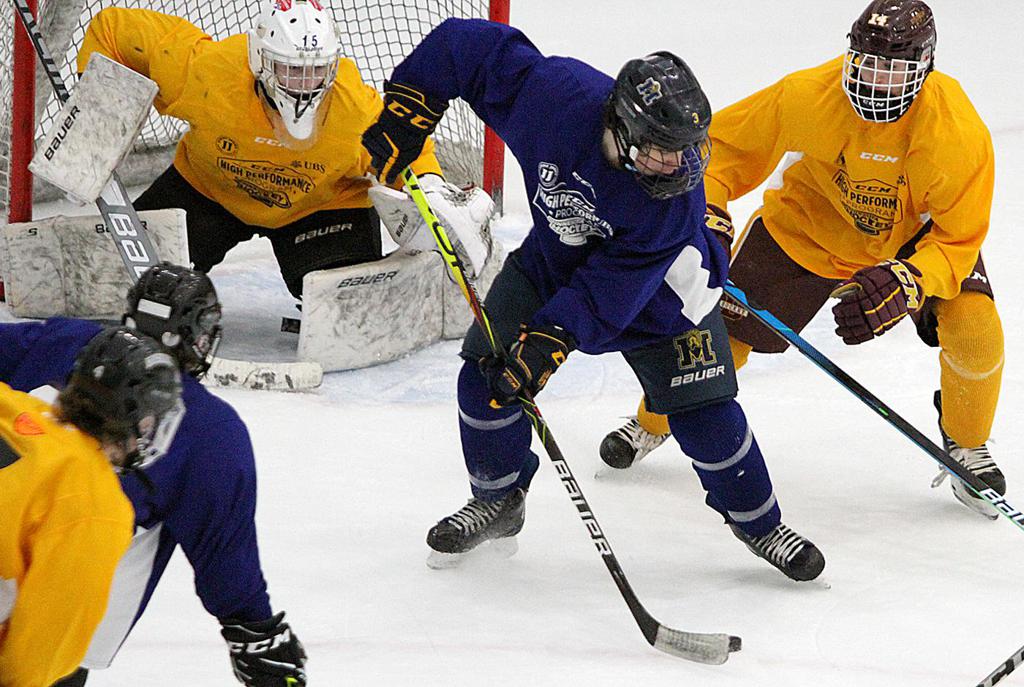 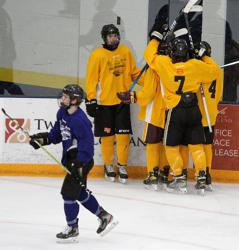 Section 7 scored the games first three goals over a seven-minute span midway through the first half. When Section 4 cut into that lead with a pair of goals early in the second and pulled within one score at 4-3, Gold responded with the next two and reclaim command of the contest for good.

Gold goaltenders Nathan Jurgansen (Greenway) made seven saves on eight shots in the first half. Kyle Abrahamson followed in the second, making 14 saves on 16 shots for Section 7.

For Blue, Hill-Murray teammates Dylan Godbout and Anthony Madigan each finished with a goal and an assist in the loss.  — Drew Herron

B17: Section 6 Gray squad heavily outshot SkyBlue from Section 5 for the better part of 48 minutes, but it took an extra session of 4-on-4 to settle things.

A little more than 30 seconds into the extra time, Gavin O’Connell (Wayzata) fired a well-placed wrist shot from the right circle for a backdoor goal that gave the Grays the 2-1 victory that was elusive no more. It also earned them third place for the weekend.

During regulation, the Grays had poured on 42 shots, but SkyBlue goalies Toby Hopp (Maple Grove) and Ryan Wallin (Blaine) were up to the task. Wallin stopped 26 of 27 shots in the first half, and Hopp was 15 of 15 in the second to keep Gray frustrated.

It was Gray who got things started when Aiden Wahlstrom (Benilde-St. Margaret’s) scored on helpers from a pair from Cretin-Derham Hall. Gabe Rasmussen got the first assist, Devin Cardenas the second.

A little more than five minutes later, SkyBlue answered off a shot from Luke Steffan (Blaine).

A physical, but scoreless second half followed before O’Connell’s shot wrapped it up in overtime, soon after it began.

Gray settles its weekend record at 2-1, with SkyBlue dropping to 1-2. -- Drew  Herron 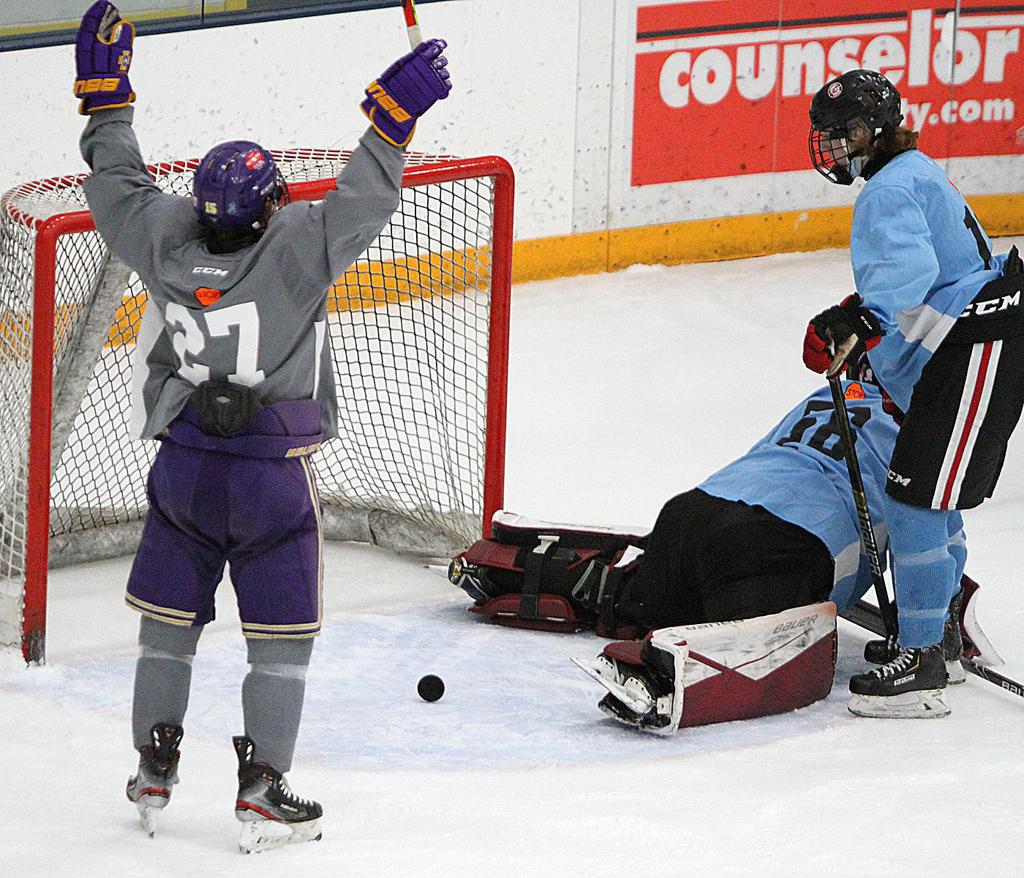 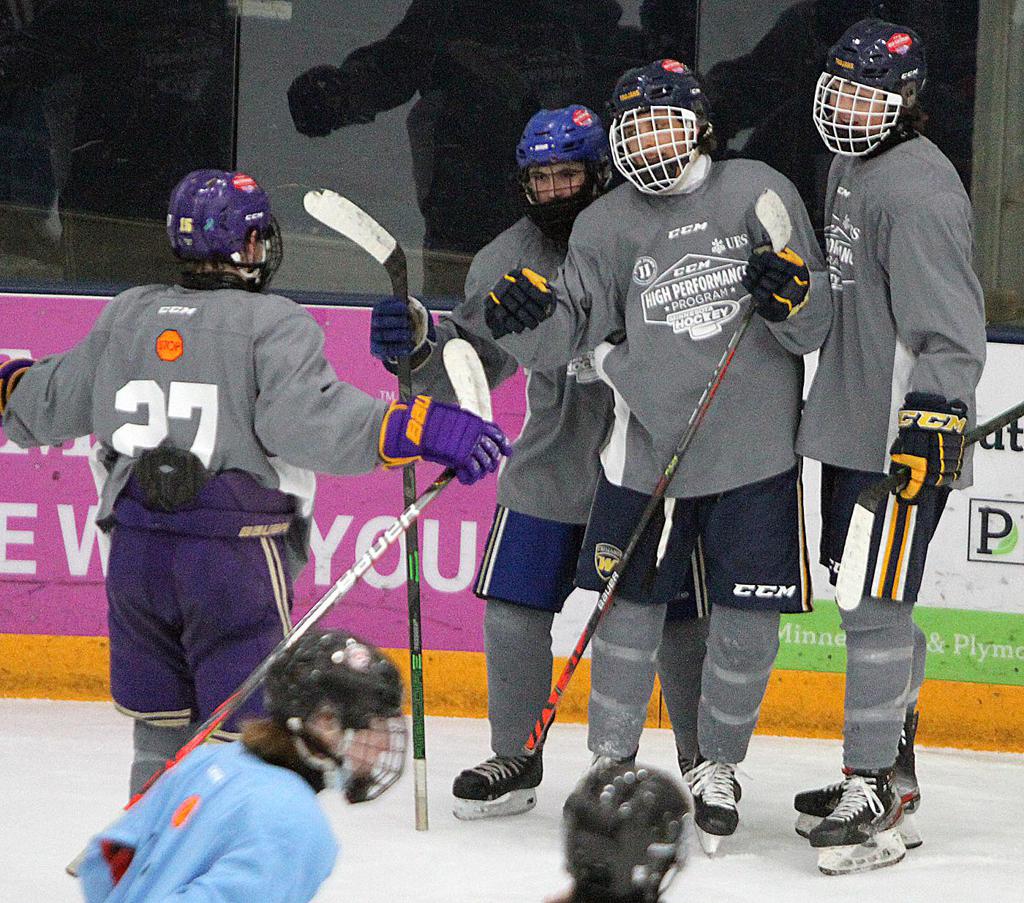 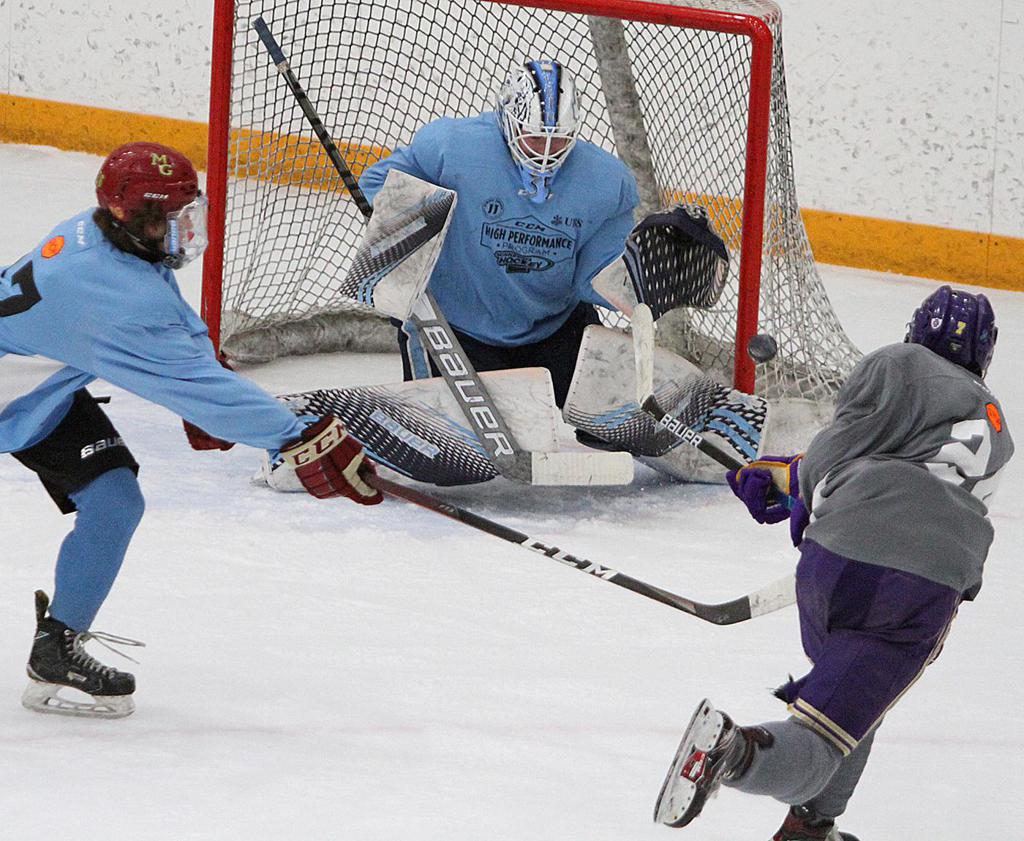 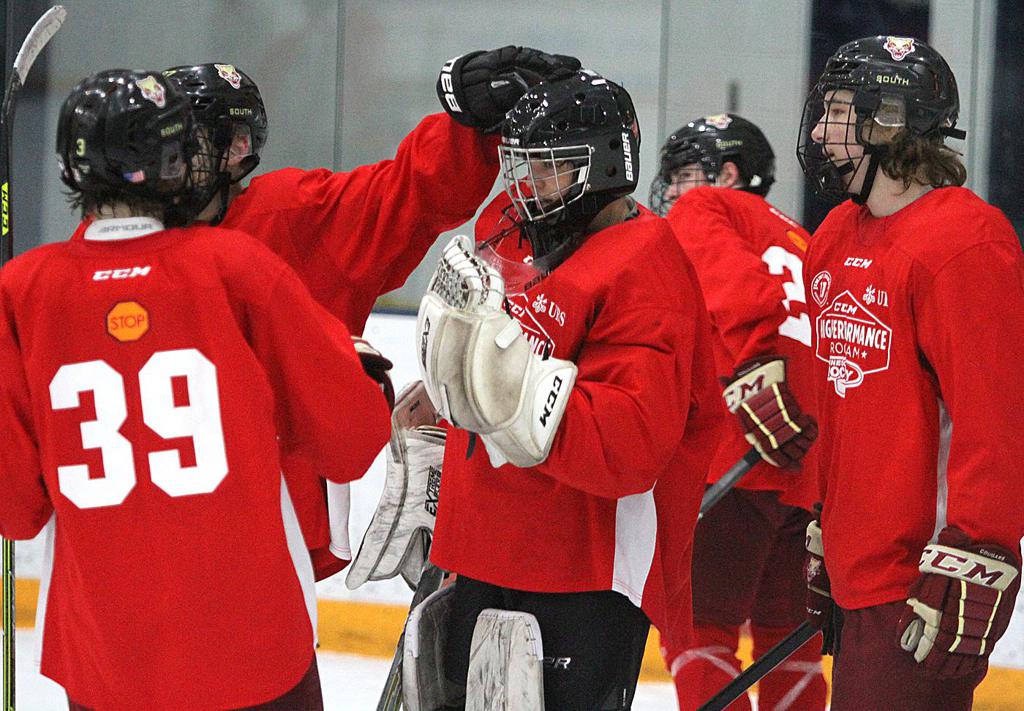 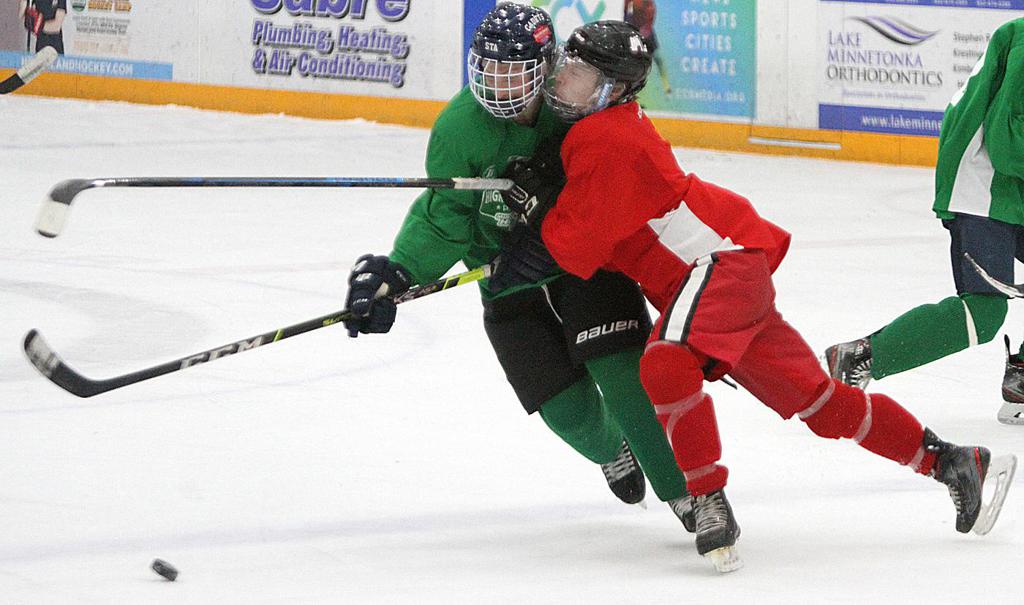 Cothern made 22 saves on 23 shots in the first half, followed by Walock’s perfect 18 of 18 in the second.

All three of the game’s goals came during a three-minute flurry late in the opening half. Red’s Taylor Bogen (Owatonna) broke the ice with 3:28 remaining before halftime, assisted by Gavin Brunmeier (Mankato West) and Connor Stoffel (Hastings).

A short time later, Tyler Grahme (St. Thomas Academy) netted the equalizer on a set up by STA teammates Maxwell Nagel and Tommy Cronin to settle it 1-1. But with seven seconds before the halftime break, Tanner Ludtke (Lakeville South) struck with the eventual game-winner with helpers from his South teammates Ben Portner and Tate Pritchard to take a lead that would hold.

In the second half, a tighter and more physical tone took shape, though the Reds would withstand all Green could throw at them to pocket the one-goal victory. Red settles its record at 1-2 for the weekend, with Green dropping to 0-3.  -- Drew Herron