June 1st isn’t typically a holiday, but it felt like one this year for many kids. After a three-month hiatus from hockey and all youth sports, the opportunity to return to the ice has brought smiles to countless kids across the state already.

Whether it’s hearing skate blades cutting through the ice, feeling the puck on your stick or getting to finally see your friends, that type of pure and simple joy leaves a lasting impression.

As kids spend more time on the ice though, it’s only a matter of time before they want to crank up the competitive dial and start playing games. With the current social distancing guidelines, the question becomes how do you maintain that level of enjoyment and physical distancing at the same time.

“First and foremost, kids need to be safe, and then, you need to make it fun” said Guy Gosselin, an ADM regional manager for USA Hockey.

And when it comes to what we should be doing with our time on the ice, “it’s the same message just in a different format.”

After all, competition is a key part of what makes hockey fun so finding ways to incorporate it safely will be an important area for everyone in the coming weeks.

Gosselin, who is a Rochester native and two-time Olympian, is an ardent advocate for emphasizing habits and concepts through small area games and drills in practices, but even he admits practices will likely be a little different to start.

“You need to understand what the practical applications are,” said Gosselin. “It’s really easy to talk the talk, but when you get out on the ice with hockey players, it’s a little hard.”

“The one-on-one competitive stuff can’t happen in a close area.”

Current restrictions for hockey include maintaining six feet of distance, pods of 10 and no contact, even in a practice setting. That means many small area games which have become such a common and important component of practices may need to be on hold for the time being.

“The technical skills are obviously going to be easier than small area games, but we can still work on concepts and habits," said Gosselin. "We can work on outnumbering. We can work on decision making.”

“There are a lot of people out there that can design a drill with kids six feet apart, but we still want to incorporate the same good habits and concepts, just a little further apart.”

The first few sessions on the ice are a great time to focus on technical skills as players shake off rust and build up their activity levels again. Then, it’s going to be time to think outside the box to provide kids with opportunities to compete against each other in safe settings.

Gosselin shares the example of a 6-on-4 drill (see image below) they have used at USA Hockey National Player Development camps that could effectively be adapted to social distancing:

“You have three offensive players on the boards, three offensive players on the far boards and then, you have three people in the middle who are trying to steal the puck and steer. The guys on the outside are trying to move the puck across the ice, and they can move it between themselves. The guys in the middle can only go to a certain point, and you can’t force inside the zone that kid has.” 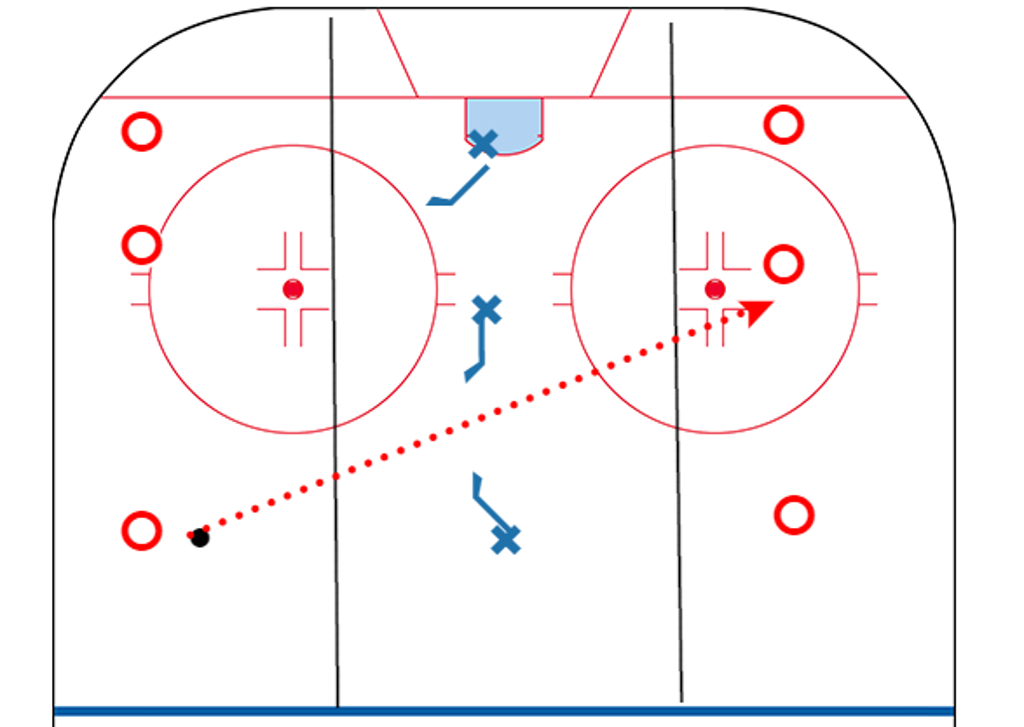 Coaches of younger players could even mark off grids in the zones where kids need to stay within so they have visual cues. Add in a point system and rotating which group of three is in the middle, and you have a small area game that abides by social distancing guidelines.

There are a number of passing games like this, sometimes called monkey(s) in the middle or rondos, that help teach important hockey concepts, but there are also shooting games such as rebound, in which 3-5 skaters compete against a goalie in a race to 10 points, that incorporate competition to increase players’ engagement and intensity.

Perhaps even more important than determining which drills to use will be implementing them on the ice with kids who have a tendency to forget safety messages upon seeing their friends or getting fixated on the activity itself.

“You need to be really thorough when you explain a drill,” said Gosselin.  “Say, ‘when we’re doing our scissor or our overlap, you need to stay six feet apart. If I’m steering a guy, I can’t close.’ It comes with telling them, but I think it comes with marking the ice as well. Putting the constraints on the ice, saying this is your area. You can’t go out of it in this drill.”

Pre-practice chalk talks and gathering the entire group at a white board are discouraged at this time so coaches will also need to be creative in delivering clear and concise instruction while maintaining physical distance.

Potential options include sending videos of drills out in advance of practice, using more on demonstrations or explaining drills in smaller groups while the players are in a semi-circle, possibly with areas or numbers marked on the ice. Using the same practice plan two sessions in a row or certain drills frequently may also help increase efficiency on the ice and reduce time spent on explanations.

While these are certainly unique challenges, the best way to maintain a fun and positive environment is by focusing on the things we can do, rather than those we can’t.

“This is new for everybody,” said Gosselin. “We’re all trying to figure this out together, but it’s going to evolve into something good.”