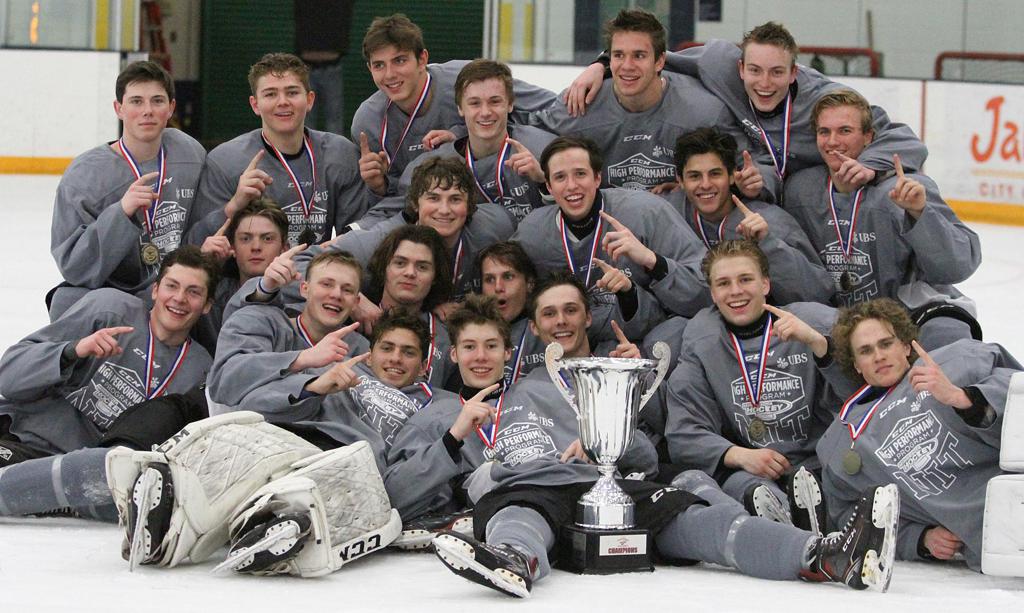 The Wisconsin Seniors team poses for a group photo with their trophy after defeating Michigan Seniors to clinch this year's NIT championship at Plymouth Ice Center. Photo by Drew Herron 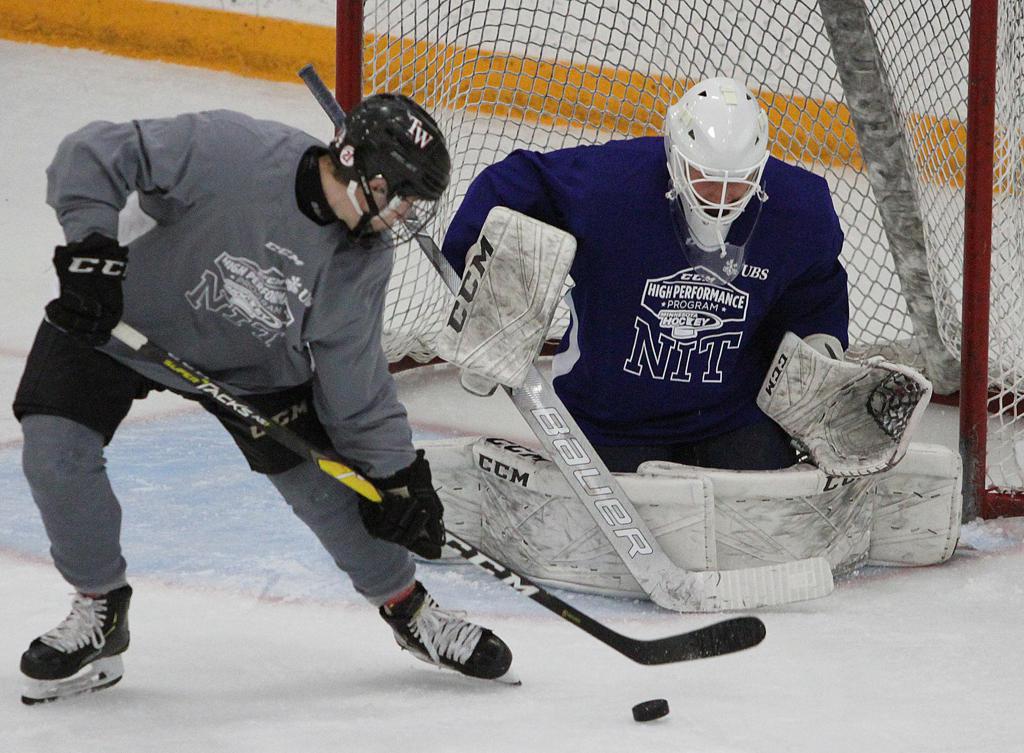 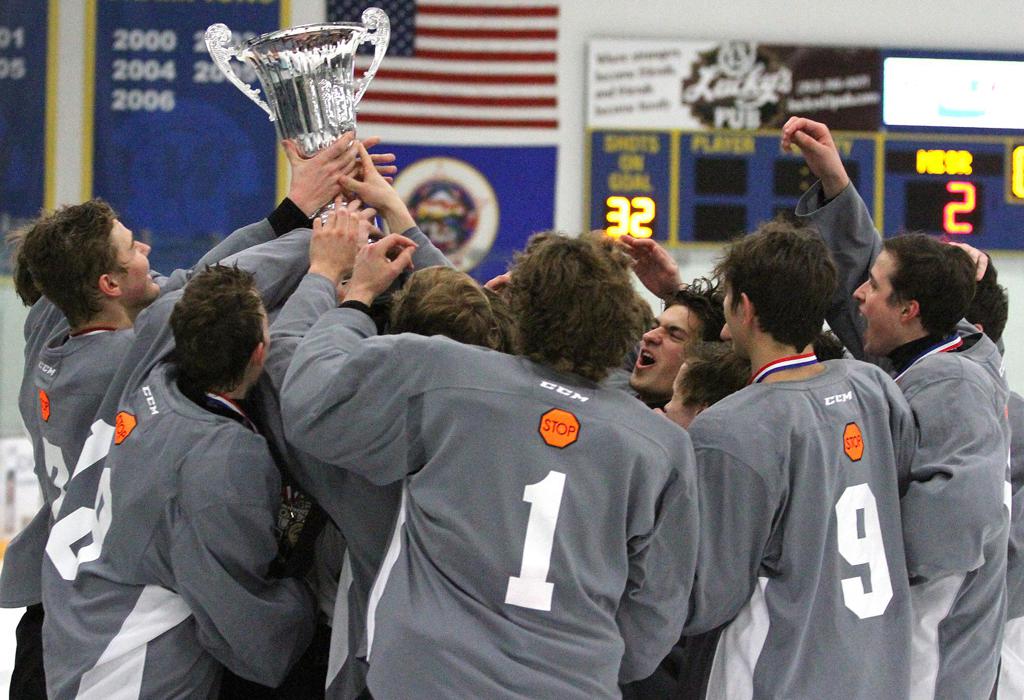 The Wisconsin Seniors raise their trophy after defeating Michigan SRs 5-2 to win the NIT title at Plymouth Ice Center. 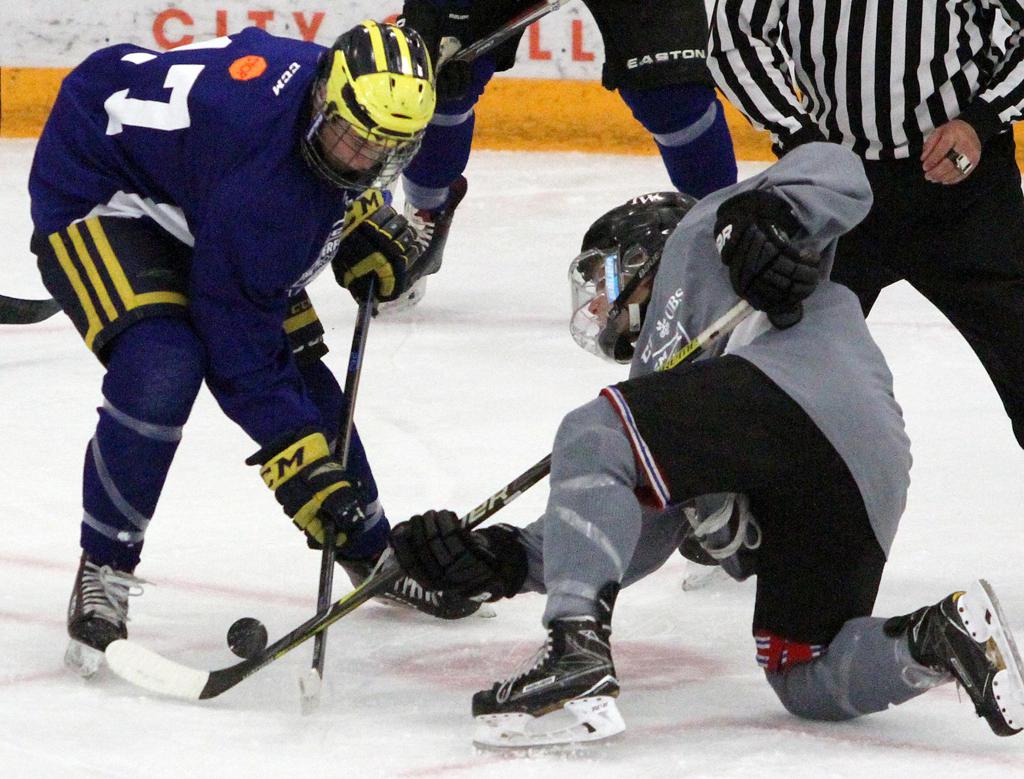 Losing its tournament-opening game Thursday afternoon did nothing to discourage the Wisconsin Seniors.

It served as quite the opposite, really. Motivated with a clearer understanding of what might work for them, the Grey squad went to work, played their style, and did not falter again.

On Sunday it culminated in a championship for the Wisconsin Seniors, who dispatched the Michigan Seniors 5-2 to seize the National Invitational Tournament title for the second time in three years.

“The important thing was that we wanted to get better as the weekend went on, and I think we did a good job at that,” coach Tim Ebner says. “We learned from our mistakes in the first game, and we learned what will work for us.”

In that opening loss to the Minnesota Seniors, Wisconsin was guilty of perhaps trying to play too cute instead of sticking to its bread-and-butter of getting pucks deep and keeping it structured and simple. They would not make those mistakes again.

Wisconsin responded with shutout victories in their next two games in which they put up a combined 11 goals to reach the championship round.

Against the Michigan Seniors, Wisconsin struck first, then battled back from a late deficit to score three unanswered goals in the third period. Cayden Laurvick (Superior) would score twice in the third to lead the charge and finish with three points in the victory. Grant Sorensen also finished with multiple points after he tallied two assists. Laurvick (3-3-6) finished tied for the tournament lead in points.

In net, Gavin Abric (Hayward) started the game and stopped 12 of 14 shots before being lifted for Garrett Larsen, who closed out the contest flawlessly with 19 saves on 19 shots as Wisconsin turned things around late. Larsen finished with a tournament-best .982 save percentage, and Abric was close behind at .951, which tied him for third. The two combined to save 112 of 116 shots they faced over the four days.

The crew returns eight players from last year’s squad that placed fifth a year ago as juniors, while the new components quickly bought in.

The NIT title serves as another step forward for high school hockey in the Badger state.

“It kind of validates our effort and our high school programs in the state of Wisconsin,” Ebner says. “This ought to give the boys a lot of confidence.”

Wisconsin Juniors get past Michigan Juniors in shootout for third place 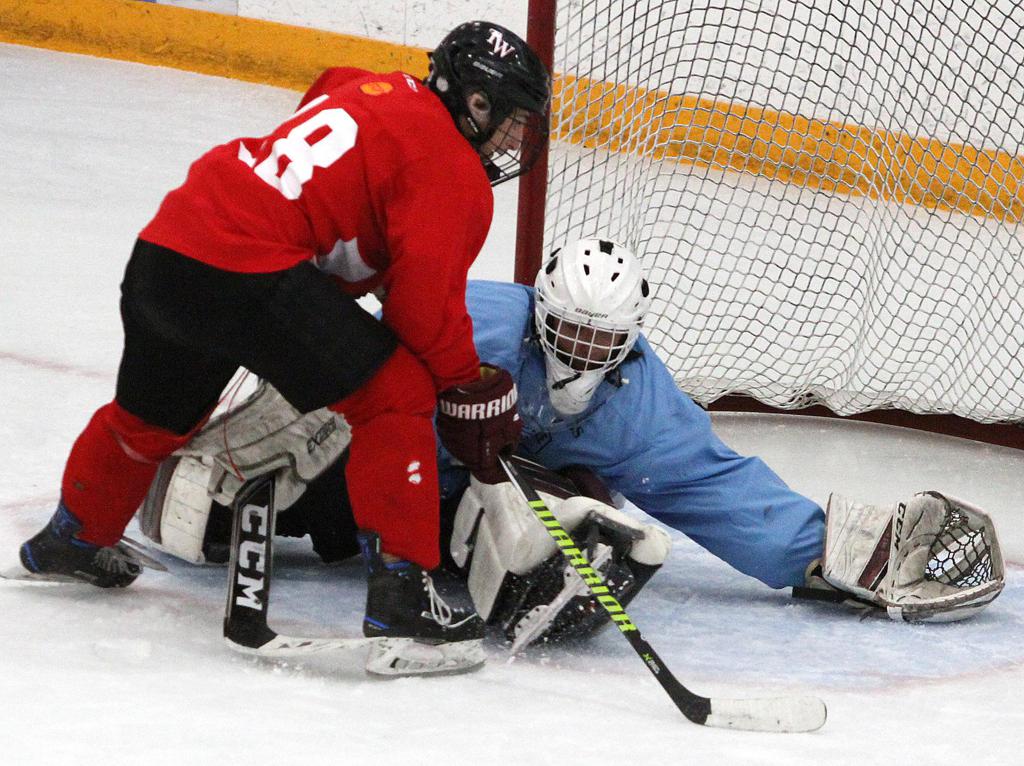 The Wisconsin Juniors lost an early lead and fought back from a deficit before converting twice in a shootout to knock off the Michigan Juniors and seize third place Sunday at Plymouth Ice Center.

T-Bone Weis (Edgewood) and Mack Keryluk (Verona) both cashed in on the shootout while goaltender Bo Buckley (Notre Dame Academy) put a lid on Michigan’s offense to push Wisconsin to an eventual 5-4 victory.

Trailing by two late, Sawyer Scholl (Notre Dame Academy) scored twice within a four-minute span in the third period to pull things even. Scholl was the only player on either side to record more than one point.

In net, Buckley stopped 15 of 16 shots after replacing Jacob Mork midway through the game. Mork made 10 saves on 13 shots. 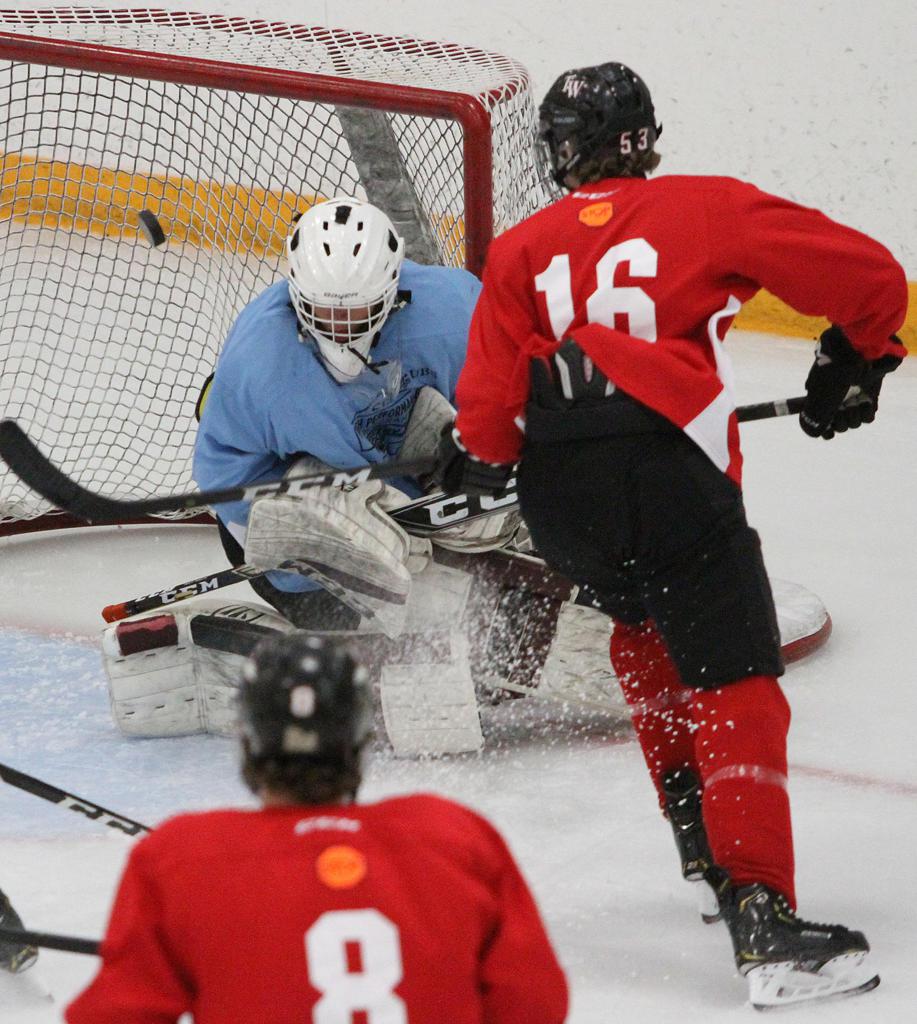 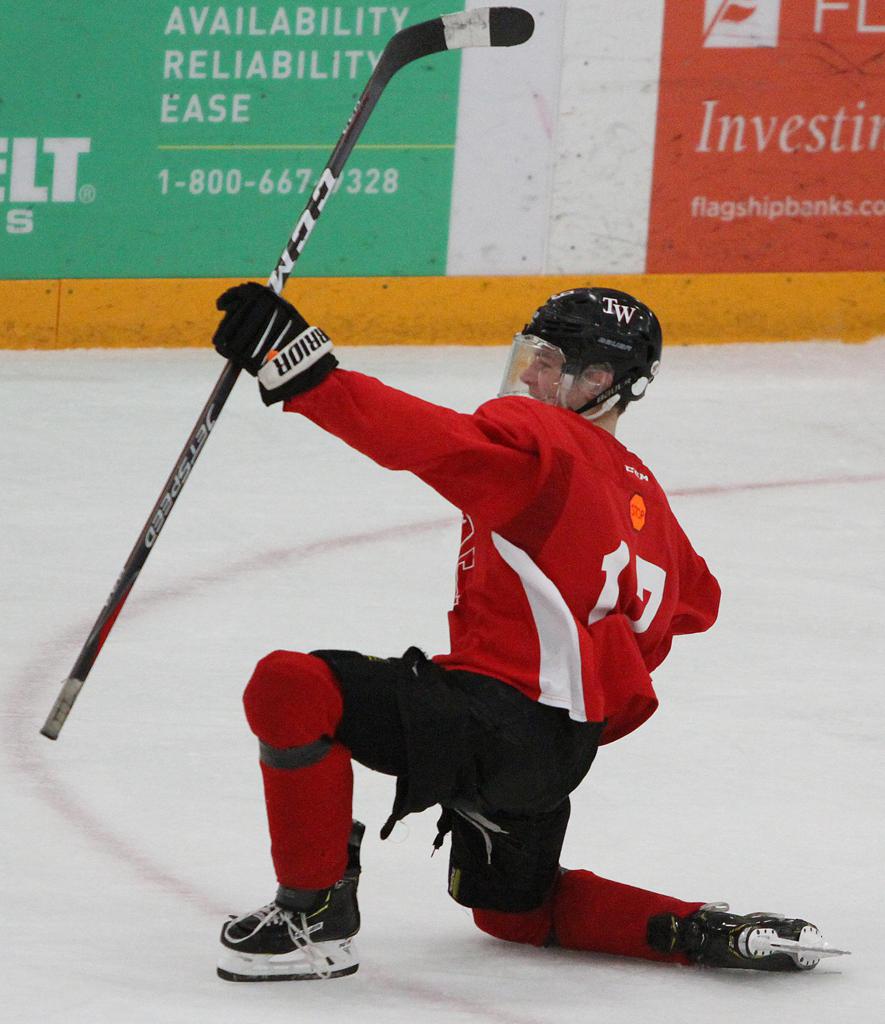 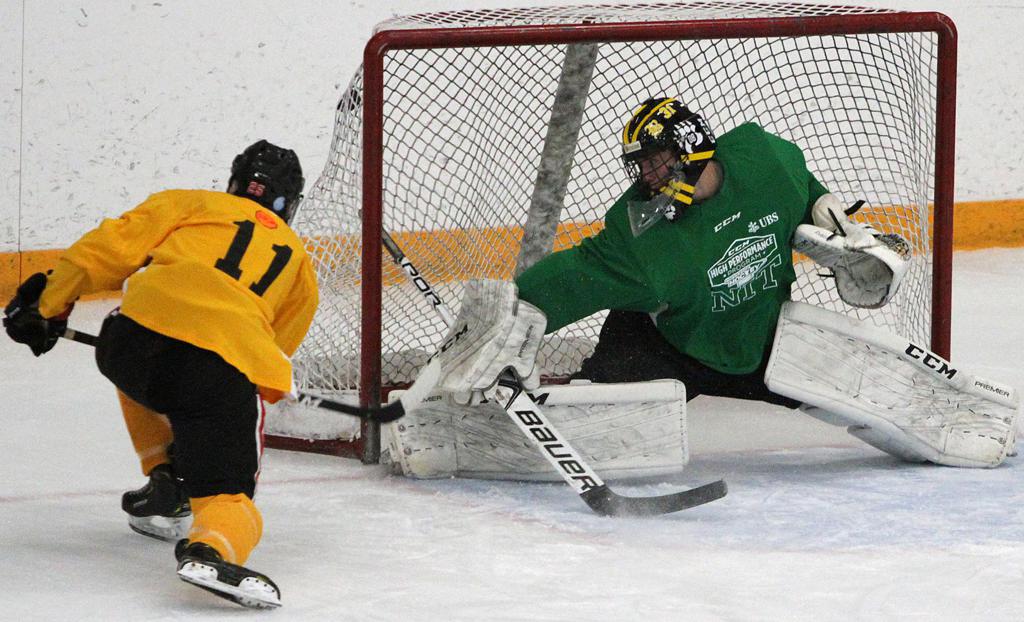 Minnesota Seniors forward Shane Griffin buries the team's first goal of the game (his third of the weekend) during the first period Sunday. Photo by Drew Herron

Minnesota Seniors too much for North Dakota

The Minnesota Seniors started fast and finished strong to wrap up the tournament with a 6-3 win over North Dakota Sunday morning on Rink A at Plymouth Ice Center.

Six different players would score for Minnesota in the victory, while Mason Plante (Marshall) and Gavin Rasmussen (Cloquet/Esko/Carlton) each finished with a goal and an assist. Nico Vega (St. Thomas Academy) also tallied two points with a pair of assists.

Shane Griffin (Lakeville North) got the scoring started less than five minutes in when he took a cross ice pass and buried it backdoor blocker side to set the table. It was Griffin’s third goal of the weekend.

The teams each scored once in the second before Minnesota pulled away.

Will Schimek (St. Thomas Academy) and Rasmussen pushed the lead to 4-1 before a pair of goals about a minute apart by North Dakota’s Tyler Savage tightened the contest.

Down the stretch, however, Minnesota would add empty net goals by Dalton Saltness (Forest Lake) and Drew Eid (Armstrong-Cooper) to pull away.

In net, Jacob Gathje (Rochester Mayo) played the whole game and stopped 21 of 24 shots for Minnesota. At the other end, Zach Sandy (Fargo South) manned the crease and made 33 saves on 37 shots he faced. 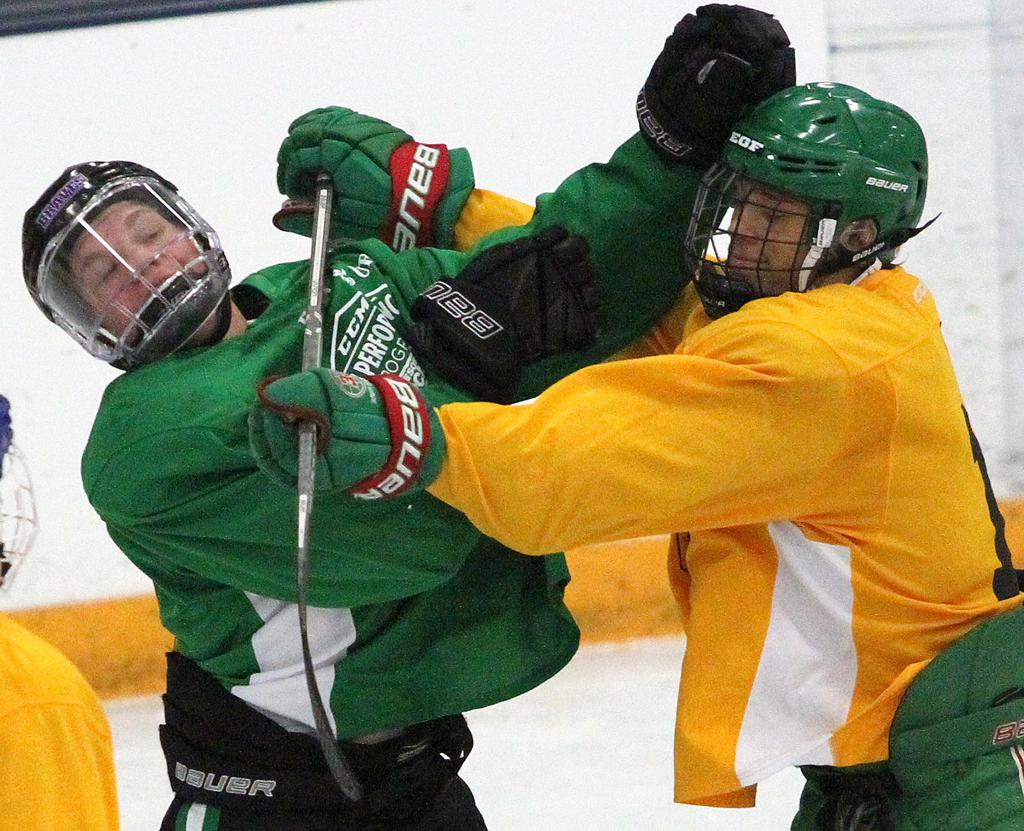 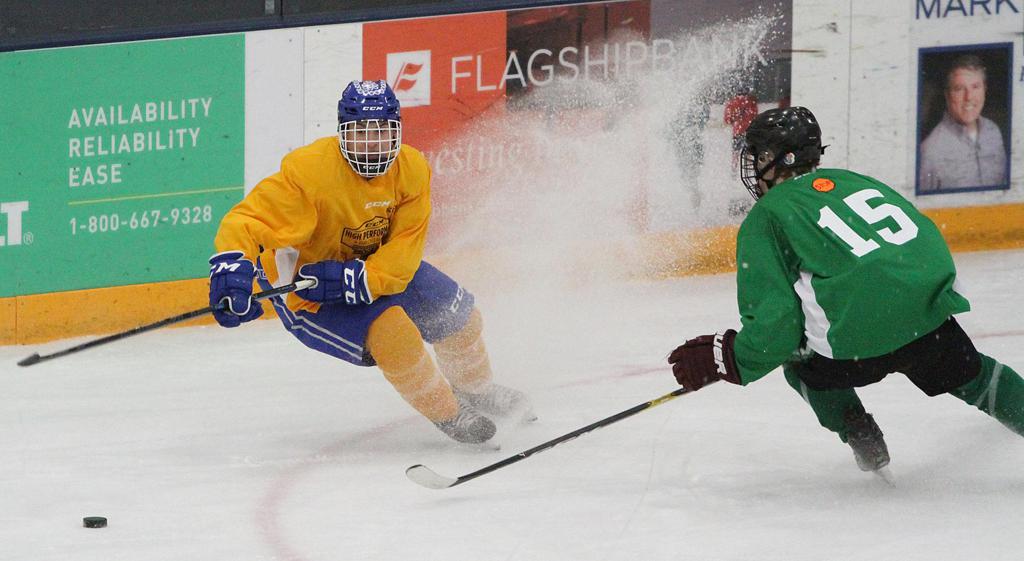 Minnesota SRs' Will Schimek makes a big cut after carrying the puck into the offensive zone. Photos by Drew Herron 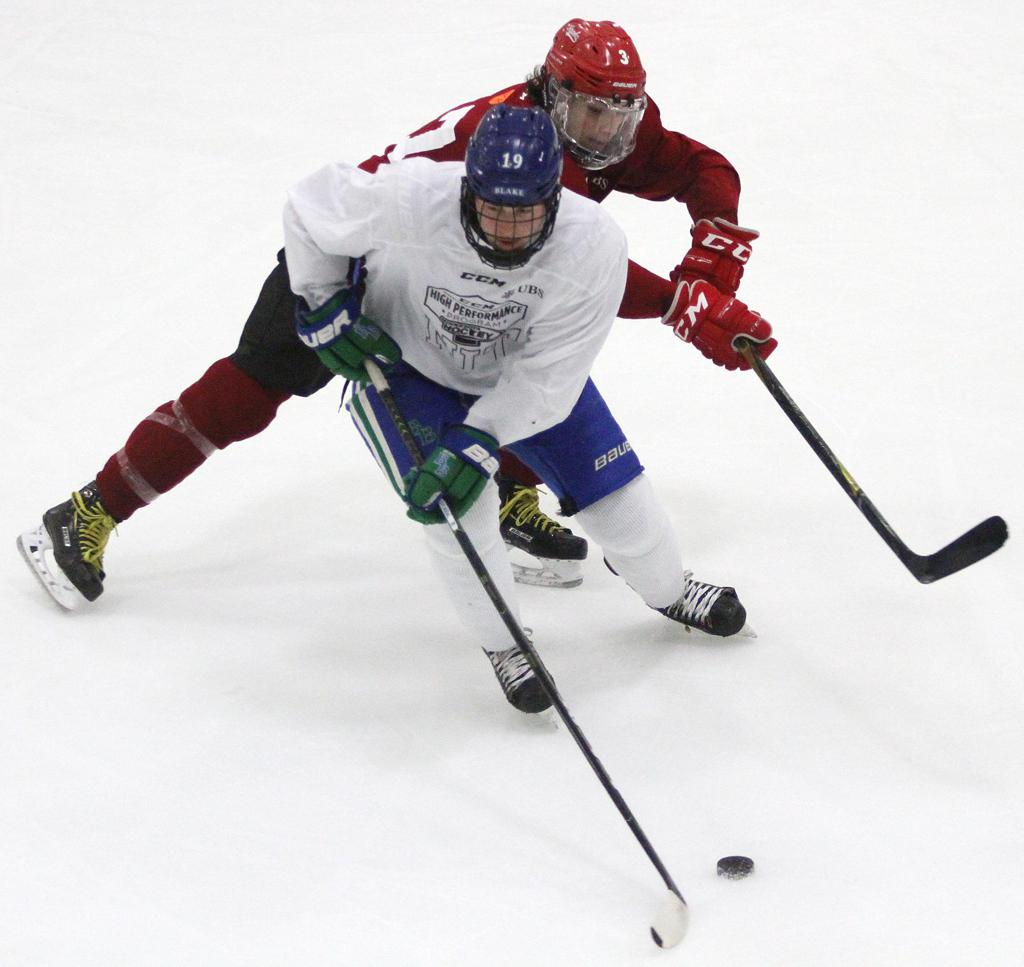 The Minnesota Juniors rattled off seven unanswered goals to turn a first period deficit into an eventual route of Massachusetts Sunday morning in the seventh place game as White toppled Maroon 8-2.

In net, Hudson Hodges (Moorhead) settled down after two early goals allowed to make 13 saves, and Evan Melville (Apple Valley) stopped all six shots he saw in his period-and-a-half of action.

But from there, it was all Minnesota. Eernisse scored twice in 20 seconds early in the second, and Minnesota led the rest of the way.

Minnesota wraps up the tournament with a 2-2 record with 15 goals scored to 12 allowed. Massachusetts drops to 0-4 with goals differential of 5 to 34.