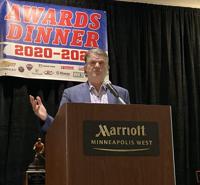 A Duluth native, Mike MacMillan has coached at the youth, high school and college levels since the early 1980’s and has been a leader in player and coach development in Minnesota and nationwide for over 30 years.

Affectionately known as “Mac”, MacMillan coached at the high school level for 30 years beginning in Menomonie, WI before coaching youth and high school in New Ulm, MN. He spent 16 years as the Head Hockey Coach at Buffalo High School, where he co-chaired the committee to build a new state of the art facility and developed training programs to benefit local players. MacMillan has also served as Executive Director of the Minnesota Hockey High School Coaches
Association (MHCA) since 2006.

MacMillan has been involved with USA Hockey since 1989 beginning as a coaching instructor delivering the Coaching Education Program (CEP). In 1995, he became the USA Hockey Minnesota (formerly Minnkota) District Coach-in-Chief. He oversaw coach education in Minnesota for 15 years before he was selected as the USA Hockey National Coach-In-Chief in 2010, and now oversees the CEP across the United States.

MacMillan is an ardent supporter of disabled hockey, serving as the Head Coach of the USA Hockey National Sled Development Head from 2011-2018 and was a founding member of the Hendrickson Foundation which supports all disciplines of disabled hockey.

MacMillan’s significant contributions to player and coach development have led to recognition by the American Hockey Coaches Association as the 2019 John “Snooks” Kelley Award, numerous MHCA awards, the Minnesota Hockey President's Award in 2011, a two-time recipient of the USA Hockey Presidents Award, and he has been inducted into the Buffalo Hockey Hall of Fame.

Thank you, Mike, for your drive and dedication to provide Minnesota players and coaches with the best training, experience and opportunities!