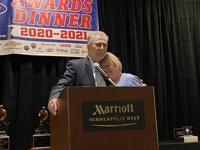 Upon signing up his son, David Jr., to play in 1975 for what is now the Osseo-Maple Grove Hockey Association (OMGHA), David Margenau
agreed to help coach, setting the stage for what now spans five decades of volunteering in hockey.

Margenau spent nearly 20 years coaching Mites, Squirts and Peewees in Maple Grove, continuing even after both of his sons had graduated. His passion for player and coach development became a hallmark of his involvement and has been a driving force for many of his greatest accomplishments.

While coaching, Margenau also served on the association’s board of directors as a Level Director, Vice President, President and then as the program’s representative to Minnesota Hockey District 3. His involvement at the district level then led to him spending three years as District 3 President and a three-year term as District 3 Director.

After retiring, Margenau returned to District 3 in 2004 as their ACE Coordinator. He quickly enhanced the education and development of association coaches in District 3 and at a state level. His dedication led to being named Committee Chair for Minnesota Hockey’s Hockey Education Program (“HEP”), where he directed the development and organization for the launch of the HEP Faceoff event featuring 900 coaches, two manuals for parents and coaches, a skill testing program and the implementation of the ground breaking Fair Play program.

Minnesota Hockey elected Margenau to serve as its Vice President of the Maroon Region (metro area) in 2005 and then as President in 2010. During three terms as President, Dave led the organization through major advancements including expanding the staff from one to four; instituting 8U growth as a core mission and priority, launching training programs to facilitate the development of grassroots leaders, developing a recreation program and the Tier I Leagues to meet the needs of all levels of players in Minnesota.

Thank you, Dave, for your tireless devotion to providing every player, coach, parent, and volunteer with an enjoyable and successful hockey experience!