In simple terms, hockey is a high speed game played on ice with the object being to shoot a small rubber puck into the opposing team's net, scoring a goal for your team. Yet, it has a tendency of growing into more of a life long passion than a game.

Hockey has been engrained in the culture of Minnesota for many years. Known also for its numerous lakes and cold winters, it makes sense that the roots of hockey in Minnesota are tied to early games on frozen ponds and lakes long before indoor ice was available.

Since those early years, hockey has grown tremendously.  Aptly nicknamed the State of Hockey, Minnesota is home to more youth hockey players than any other state in the country. The annual State High School Hockey Tournament, a legend in its own right, draws more than 100,000 fans in one weekend.  Minnesota is also home to the NHL's Minnesota Wild, who sold out each of its first nine plus seasons, five NCAA Division I college hockey teams, as well as several Division III programs and junior teams.

Full ice hockey games are played with six players from each team on the ice, which is considered full strength. (For players age 6U & 8U, games are played cross-ice, which provides them with a more engaging and age-appropriate game experience.) Each team has one goaltender, two defensemen and three forwards. The players are allowed to change with their teammates on the bench during play or stoppages of play following a whistle. 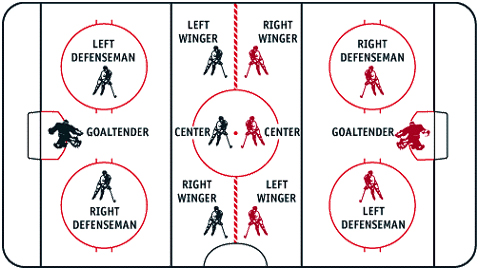 The center is the player that takes the face offs.  Centers are a key position as they often have more defensive responsibilities than the wings but are also expected to produce offensively by scoring goals or setting up their teammates.

The left wing and right wing flank the center on face offs. While they have defensive assignments in their own zone, these two forwards often have a slightly more offensive mindset than centers.  Despite their titles, the wingers are not always confined to one side of the ice.

The last line of defense is the goaltender. The goaltender’s only job is prevent the opponent from scoring. The goalie wears different equipment than the forwards and defensemen, specifically designed to provide more protection and assist them in stopping the puck.

The defensive zone is the area between the goal which your team is defending and the first blue line. This is the zone that your team tries to prevent the opponent from scoring in.

The neutral zone is the area between the two blue lines.

The offensive zone is the area between the second blue line and the opposing team's net. This is the zone in which your team is trying to score.

During the second period, teams will switch the sides of the ice that they are defending.  Therefore, the zone that was initially their defensive zone becomes their offensive zone and vice versa.  The teams return to their initial nets and zones for the third period.