"It's extremely important we provide high-level skill development programs for goalies in this age group," said Mike MacMillan, director of Minnesota Hockey High Performance programs. "The boys and girls who participated improved their overall game in a challenging and competitive setting that now includes facing shooters who are part of the Minnesota Hockey's High Performance programs."

Boys and girls who made their district/section teams in the Minnesota Hockey’s spring 15-16-17 High Performance programs were invited to participate in the camp.

The goalies got 12 hours of on-ice instruction from several of our state’s top college and high school goalie coaches.

"It completely changed my game,” Luke Carlson from Duluth East. “I thought that if a shooter was slightly off angle, and got around me, I had to go into desperation mode. But with proper instruction, I was able to learn how to control my movements and save those shots."

"Camp was super fun! It provided a challenging mix of on-ice skill development and off-ice instruction applicable to many aspects of life, not just hockey, said Maddie Mootz, from Buffalo. “Hopefully helping us develop as players and grow as people.” 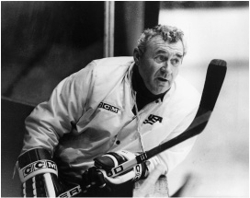 Dave Peterson is a hockey coaching legend. The Minnesota native was the head coach of the 1988 and 1992 U.S. men's Olympic hockey teams.

Dave was also a passionate leader in goalie development not only in Minnesota but also throughout the country. Many of his ideas and concepts are still being used by USA Hockey today.

In addition to his work with USA Hockey, Peterson was a long time boys hockey coach at Minneapolis Southwest High School.

Peterson passed away in 1997. Minnesota Hockey is honored his family has allowed us to add his name in support of this exciting goalie development program.

Click on link to see what participants are saying about their experience at the goalie camp.

Learn more about the shooting camp which is held in conjunction with the Dave Peterson Goalie Camp.

Click on link to see sampling of goalie participants who played college hockey.